The Latest: Connecticut governor is self-quarantining 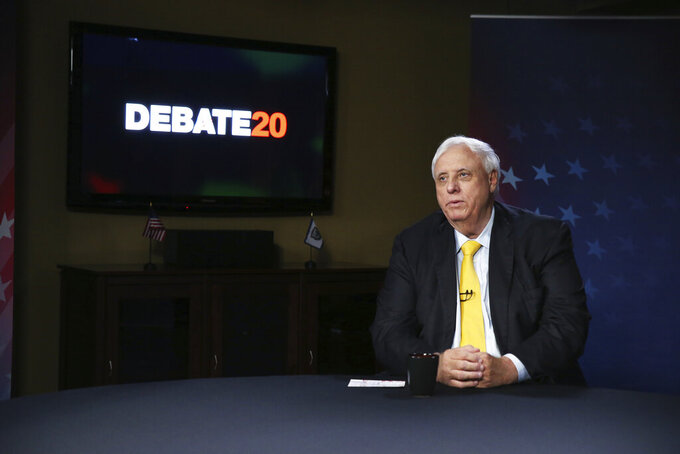 Reiss wrote he wasn’t sure how or where he contracted the virus, but added that his family had been self-quarantining after his children were exposed at school. He said none of his family was experiencing symptoms, but they will quarantine for the next two weeks.

Contact tracing has begun and all members of the administration who have been within 6 feet (2 meters) of Reiss for 15 minutes or more will self-quarantine for 14 days. In addition to Lamont, chief of staff Paul Mounds and chief operating officer Josh Geballe will self-quarantine. Reiss also encouraged journalists who had contact with him under those same parameters in the last 24 hours to “take the necessary steps.”

Lamont and senior staff are tested twice a week, the release from the governor’s office said, and there are no known additional positive cases.

Three U.S. governors — Republicans Kevin Stitt of Oklahoma and Mike Parson of Missouri and Democrat Ralph Northam of Virginia — had COVID-19 earlier this year. Another governor, Democrat Steve Sisolak of Nevada, announced Friday that he had tested positive for COVID-19.

— States ramp up for biggest vaccination drive in US history

— Virus ward doctor runs from dawn to dark in Italy, fears the devastation of the coming winter.

— Many school districts are temporarily shutting down in-person classes as cases rise across U.S.

CARSON CITY, Nev.— Nevada Gov. Steve Sisolak on Friday said he has tested positive for COVID-19 as the virus surges to record levels in the state and across the U.S.

The 66-year-old Democrat is the fifth governor to report testing positive for the coronavirus this year. Three governors, two Republicans in Missouri and Oklahoma, and one Democrat in Virginia contracted COVID-19 this year.

Sisolak said he was not experiencing any symptoms on a call with reporters and was swabbed for a rapid test on Friday morning as a matter of routine. After it yielded a positive result, he also underwent molecular testing and his sample is still being processed.

SEOUL, South Korea -- South Korea’s soccer association says four players and a staff member of the men’s national team have tested positive for COVID-19 after arriving in Austria for a friendly with Mexico.

Korea Football Association spokesperson Kim Min-soo said the rest of the team will be re-tested before a decision is made whether to cancel the match with Mexico, which was scheduled for Saturday night local time in Wiener Neustadt, south of Vienna.

The KFA said none of the five who tested positive were showing symptoms and that players and staff were currently quarantining in their rooms.

At home, South Korean health authorities reported 203 new cases of COVID-19, the highest daily jump in 73 days, causing concern in a nation that has eased its social distancing restrictions since October amid concerns over a weak economy.

MONTGOMERY, Ala. -- Alabama on Friday added almost 3,000 COVID-19 cases, the highest number reported in a single day since the pandemic began. Health officials believe many of those cases arose from Halloween parties, sporting events and other group gatherings.

“This is a new record for us,” State Health Officer Scott Harris told The Associated Press. “Overall, we believe the number accurately shows that Alabama is seeing increased community transmission of COVID-19.”

Harris said unlike past surges of that size, the increase is not due to a large data dump of previously backlogged reporting.

Health officials have expressed concern about an uptick in hospitalizations and deaths as the nation heads into the holiday season.

Santa Clara, Marin and Contra Costa counties announced Friday that they will halt indoor dining as of Tuesday.

The Bay Area generally has been more cautious than the rest of the state in allowing activities during the pandemic, and health officers representing 7 million people implemented a stay-at-home order back in March ahead of a similar order by the state.

Dr. Sara Cody, health officer for Santa Clara County, which is home to Silicon Valley, said it is “absolutely imperative” to take action given the steep increase in cases starting around Election Day. She said she expects the state to move the county back to a more restrictive tier of operation and would rather not wait to take action.

Businesses have pushed back on the idea that restaurants and gyms are to blame for virus transmission, and health officials have said that small, casual gatherings at home where family and friends are not wearing masks or socially distancing are to blame for the latest surge.

TOPEKA, Kan. — Some churches in Kansas have suspended indoor, in-person worship services and the capital city’s zoo even has tightened its rules as the the state set another record for new coronavirus cases.

The bishops of the two Episcopal Church dioceses that cover Kansas this week directed their congregations to suspend services and meetings. The United Methodist Church bishop for Kansas and Nebraska also encouraged its churches to suspend in-person services until further notice if they are in counties “identified as being in critical or dangerous statuses.”

And the Topeka zoo said that starting Saturday, all visitors will be required to wear masks, except when eating. The zoo had allowed visitors to take off their masks if they were outdoors and socially distanced.

PHILADELPHIA -- Health officials in Pennsylvania’s third-most populous county ordered schools Friday to temporarily halt classroom instruction in what they said was an effort to contain the spread of the coronavirus.

The Montgomery County Board of Health mandated that all public and private K-12 schools in the suburban Philadelphia county offer virtual instruction for two weeks beginning Nov. 23. The order affects tens of thousands of students in more than 20 public school districts along with students of charter, private and parochial schools.

Spiking COVID-19 numbers are prompting other Pennsylvania school districts to take action. Pittsburgh Public Schools announced Friday that more than 800 students who resumed classroom instruction just this week would have to go back to remote learning.

HARTFORD, Connecticut - The University of Connecticut placed all dormitories under quarantine at its main campus Friday because of rising coronavirus infections, as the state reported a daily record of positive test results.

Gov. Ned Lamont’s office reported 2,746 more people tested positive for COVID-19 compared with Thursday. It was the highest number since testing began in March and the first time that daily positive tests totaled more than 2,000 since April.

UConn officials also announced that all 5,000 residential students in Storrs will be tested before leaving for the Thanksgiving break in two weeks.

All other residence halls in Storrs are under a “modified” quarantine, meaning students are allowed to leave their dorms only for in-person classes and essential research and clinical activities.

“We don’t have the COVID spread under control,” Daugherty wrote in a notification to students. “This is about family, my friends. We all want to go home and be with our loved ones. It is essential that we return home to our families in our best health.”

SACRAMENTO, Calif. — California Gov. Gavin Newsom says he should not have attended a birthday party with a dozen people at an upscale restaurant earlier this month as the state is battling an increase in coronavirus cases.

The San Francisco Chronicle first reported Friday that the Nov. 6 event was a 50th birthday party for Newsom friend and adviser Jason Kinney. It took place at the French Laundry in Napa County, a pricey Michelin star restaurant.

Newsom says he followed the restaurant’s health protocols and took safety precautions. The group dined outside.

Newsom has also encouraged people to maintain social distancing and limit mixing with others.

The governor’s office said in a news release that the state’s cap on gatherings will be reduced from 250 to 25, the state’s mask requirement will be applied to younger children, and alcohol sales will be prohibited at dining establishments, breweries and wineries after 10 p.m. Those and other new restrictions will take effect at midnight Sunday.

The gathering ban will apply to events such as weddings, but won’t impact schools or restaurants. Restaurants were already subject to capacity limits due to rules requiring that patrons remain socially distanced.

“COVID-19 is surging across the country, and while cases are not rising in Virginia as rapidly as in some other states, I do not intend to wait until they are. We are acting now to prevent this health crisis from getting worse,” Northam said in a statement.

Gordon declined to go into specifics at a news conference Friday. Gordon says state officials will be meeting with local business leaders in the days ahead to discuss the best approach.

Gordon says many people in Wyoming are being “knuckleheads” by not taking steps on their own to prevent spreading the virus.

Wyoming now ranks behind only the Dakotas for new coronavirus cases per 1,000 people.

SALEM, Ore. — Oregon Gov. Kate Brown announced a statewide two-week “freeze” in the state Friday, which will limit restaurants and bars to take-out only and close gyms, indoor and outdoor recreational facilities during that period.

The freeze will be in effect from Nov. 18 through Dec. 2 and aims to limit group activities and slow the spread of COVID-19.

As part of the freeze grocery stores, pharmacies and retail stores are limited to a maximum capacity of 75%.

Faith-based organizations will also have their capacity reduced to 25 people inside and 50 people outside. However, other facilities — gyms and fitness centers, museums, pools, sports courts, movie theaters, zoos, gardens, aquariums and venues — will have to close their doors completely.

All businesses will be required to close their offices to the public and mandate work-from-home “to the greatest extent possible.”

Coronavirus cases in Oregon have been increasing since mid-September and began to surge at an “alarming rate” in November.

On Thursday, Oregon recorded 1,122 new confirmed or presumptive cases of COVID-19, the first time it had surpassed 1,000 cases. The total number of confirmed cases since the start of the pandemic is nearly 54,000. The death toll is 746.

NEW ORLEANS -- The number of new, confirmed COVID-19 cases in Louisiana jumped by nearly 3,000 in the latest daily figures released by the state health department.

The latest state health department figures also show hospitalizations have edged back up statewide — hitting 684 after dipping to 676 a day earlier. Hospitalizations, a key figure used in determining what restrictions on gatherings are needed, remain well below the peaks they hit earlier this year — close to 2,000 during a spring outbreak and around 1,600 in late summer. But they have trended gradually upward since early fall.

New Orleans officials have expressed worries about a growing number of cases after recently easing some of the toughest restrictions in the state.

BOSTON — Massachusetts is planning to open a field hospital in Worcester to prepare for a possible overflow of COVID-19 patients as the disease continues to surge again in the state.

The facility will be located at the DCU Center in Worcester and will include 240 beds. It should be ready to take in patients as early as the first week of December. The partner for the site will be the University of Massachusetts Memorial Medical Center.

The announcement comes as the state has begun recording more than 2,000 newly confirmed cases daily of the disease caused by the coronavirus.

During the initial spike of the virus in the spring, the state opened five field hospitals across Massachusetts.