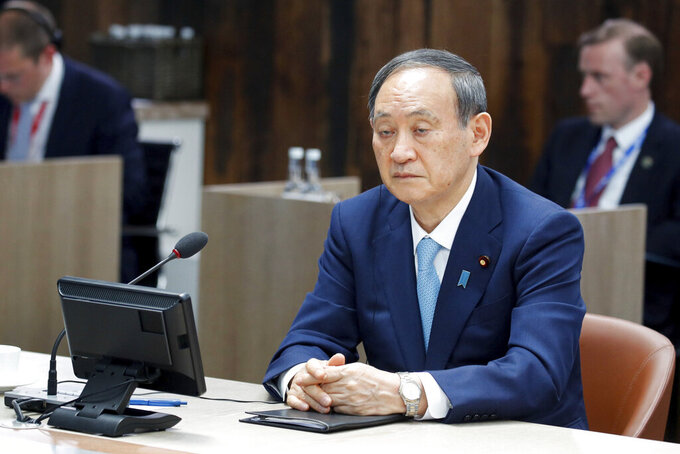 O’FALLON, Mo. — A swath of southern Missouri is seeing a big rise in coronavirus cases and hospitalizations at just the wrong time — as tourists eager to get out after being cooped up for a year make their way to popular destinations like Branson and Lake of the Ozarks.

Data from the state health department’s COVID-19 dashboard on Wednesday showed 206 people hospitalized with the virus in southwestern Missouri — nearly double the 111 hospitalizations from that region at the start of May. The number of people in intensive care units in the region has tripled — from 22 a month-and-a-half ago to 65 now. Meanwhile, statewide hospitalizations have remained steady since March.

“We think that with the Delta variant here, those that aren’t vaccinated are just sitting ducks,” said Steve Edwards, CEO of CoxHealth, which operates several hospitals in the region.

Memorial Day marked the unofficial beginning of the tourism season, and big crowds are gathering again at Branson’s popular shows and attractions, and at the beaches, resorts and entertainment areas around the Lake of the Ozarks.

— Japan looks to ease virus emergency in Tokyo, ahead of the Olympics

MIAMI — Royal Caribbean International is postponing for nearly a month one of the highly anticipated first sailings from the U.S. since the pandemic began because eight crew members tested positive for COVID-19, the company’s CEO said.

The new Odyssey of the Seas was to set sail from Fort Lauderdale, Florida, on July 3 but is now postponed to July 31. Royal Caribbean International’s CEO Michael Bayley said late Tuesday on Facebook that the decision had been made “out of an abundance of caution,” adding that the company is also rescheduling a simulation cruise scheduled for late June.

The company says all 1,400 employees aboard the Odyssey of the Seas were vaccinated on June 4 but two weeks had not passed for their bodies to build protection against the virus. The ship was to sail from Fort Lauderdale July 3 but has been rescheduled for July 31.

Royal Caribbean International has said that passengers are “strongly recommended” to get vaccinated, adding that unvaccinated passengers must be tested for the virus and follow other measures.

The debut of the Odyssey of the Seas was highly anticipated as cruise lines attempt a comeback after more than 15 months of not sailing from the U.S.

RICHMOND, Va. — An inmate early release program aimed at controlling the spread of the coronavirus in Virginia prisons will end on July 1.

State prison officials have released more than 2,100 inmates early in the past year to reduce the prison population during the pandemic. The program was authorized under a budget amendment proposed by Gov. Ralph Northam and approved by state lawmakers in April 2020. The authorization expires on July 1.

Department of Corrections Director Harold Clarke says about 70% of the inmate population has been vaccinated against COVID-19. There are no current cases among the population. A total of 56 inmates and five staff members who tested positive for the coronavirus have died during the pandemic.

LISBON, Portugal — Portugal is experiencing a surge in coronavirus cases, with the government set to review its pandemic rules on Thursday.

The European Union country reported 1,350 new cases on Wednesday, the highest daily total since February. Experts say the delta variant first identified in India may be driving the spread. The Lisbon region has accounted for almost 1,000 of the new cases.

Portugal was the worst-hit country in the world in January, when daily cases peaked at more than 16,000. Nearly 7,000 COVID-19 patients were in the hospital and close to 1,000 were in ICUs. Now, hospitals have 351 virus patients, with 83 in intensive care.

A nation of 10.3 million people, Portugal has inoculated 42% of its population with a first dose of a COVID-19 vaccine and 25% have had both shots.

PHOENIX — A new report indicates Latinas have left the U.S. workforce at rates higher than any other demographic and had some of the highest unemployment rates throughout the pandemic.

That could spell trouble not just for a post-pandemic economic recovery but for the long-term stability of the country as baby boomers retire. Latinas were projected to increase their numbers in the workforce by nearly 26% from 2019-29 — a higher rate than any other group.

The UCLA study found Latinas experienced the highest unemployment rate — 20% — of any demographic in April 2020, right after all of the business shutdowns began. By the end of 2020, when businesses were starting to reopen, Latinas and Black women still had nearly double the unemployment rate of their white counterparts, the study found.

Sylvia Allegretto, a labor economist at the University of California, Berkeley, says businesses need to offer higher pay and better benefits to those re-entering the workforce.

“The long-term trend is we don’t have enough workers,” she said. “If you want to make sure you have a vibrant, growing economy, you need more people.”

The report was released Wednesday by the UCLA Latino Policy and Politics Initiative, a Latino-focused think tank. It was provided first to The Associated Press.

BANGKOK — Thailand plans to fully reopen to vaccinated foreign visitors by mid-October as the government seeks to restart the coronavirus-devastated tourism industry.

He acknowledged that reopening comes with risks but says it’s time because of the economic needs of the people. Tourism is a major contributor to Thailand’s economy and employs millions of people. The country attracted nearly 40 million foreign arrivals in 2019.

The prime minister says the government, which previously targeted next January for reopening the country, will reconsider only if a serious situation develops.

Thailand is facing a surge in coronavirus cases that began in April and accounted for more than 80% of the country’s 204,595 total confirmed cases and 90% of its 1,525 confirmed deaths.

There have been delays securing and deploying vaccine supplies. Thailand only has supplies of Sinovac, from China, and AstraZeneca, which is produced locally under license. Just over 7% of the country’s 69 million people have had at least one dose.

ST. LOUIS — Two of the largest employers in the St. Louis area have announced they will require employees to be fully vaccinated against COVID-19 by fall.

The St. Louis Post-Dispatch reports that BJC HealthCare and Washington University announced the vaccination requirements. The announcement comes at a time when demand for vaccines is waning in Missouri, a state that already lags the national average in COVID-19 immunization rate.

The St. Louis region’s three other major health systems — SSM Health, Mercy and St. Luke’s Hospital — have not issued vaccine requirements but say they were discussing the issue.

Missouri Hospital Association President and CEO Herb Kuhn said hospitals across the state have “seen COVID-19′s devastation in lives and health lost,” and many are evaluating vaccine requirements.

TOKYO — Japan is expected to ease a coronavirus state of emergency in Tokyo and most other areas this weekend, with the Olympics starting in just over a month.

Daily cases have since significantly declined and Prime Minister Yoshihide Suga is expected to downgrade the state of emergency when it expires on Sunday to a less-stringent quasi-emergency for several weeks.

Despite concerns raised by medical experts and the public over the potential risks of holding the Olympics, Suga has said he is determined to hold a “safe and secure” games on July 23.

Japan since late March has struggled to slow a wave of infections propelled by more contagious variants, with daily cases soaring above 7,000 and serious patients overwhelming hospitals in Tokyo, Osaka and other metro areas.

In Tokyo, infections are now down to around 500 per day from above 1,100 in mid-May. Tokyo Gov. Yuriko Koike has said effective coronavirus measures need to be kept in place.

Health experts say it is crucial to accelerate the vaccine rollout to hold the Olympics safely in one of the world’s least vaccinated developed countries. As of Tuesday, only 5.6% of Japanese were fully vaccinated.

EU members agreed Wednesday to add the United States to the list of countries from which restrictions on non-essential travel should be lifted. The move was adopted during a meeting in Brussels of permanent representatives to the 27-nation bloc.

The recommendation is non-binding, and national governments have authority to require test results or vaccination records and to set other entry conditions.

In addition to the U.S., the representatives of EU nations also added North Macedonia, Albania, Serbia, Lebanon and Taiwan to the tourist travel list. The recommendations are expected to be formalized on Friday.

Faisal Sultan says some citizens may have faced difficulty getting inoculated because of long lines. Sultan says additional doses of vaccines are being supplied to those vaccination centers where people responded positively to government appeals to get inoculated.

He says about 20 million doses of vaccines are available in Pakistan to meet growing demand. Pakistan plans to spend $1.1 billion in the next fiscal year to import COVID-19 vaccines to inoculate most of the 100 million adult population.

Authorities have reported a steady decline in deaths and confirmed cases from coronavirus. Pakistan, a nation of 220 million, has registered 944,065 confirmed cases and 21,828 confirmed deaths.

The announcement by French Prime Minister Jean Castex comes as France reports about 3,900 daily virus cases on average, down from 35,000 in the March-April peak.

Castex welcomed the “very good news,” saying the curfew will be lifted 10 days earlier than expected. Wearing a mask will still remain mandatory outdoors in crowded places like street markets and stadiums, he says. People are required to wear a mask indoors in public spaces, including at work — with an exception for restaurants and bars.

More than 58% of France’s adult population has received at least one COVID-19 vaccine dose. On Tuesday, vaccinations opened to those ages 12 to 18 to help protect the nation as restrictions are gradually lifted.

Major sports and cultural events can have a maximum of 5,000 people, and all need to show a vaccination certificate or a negative test within the last 48 hours.

The nation has reported 110,563 confirmed deaths, one of the highest tolls in Europe.

MOSCOW — Authorities in Moscow and the surrounding region on Wednesday made COVID-19 vaccinations mandatory for those working in retail, education, health care, public transport and other trades that provide services to a large number of people.

Russian public health officials ordered businesses and institutions to ensure that 60% of staff get at least one shot of a coronavirus vaccine by July 15 and are fully vaccinated by August 15.

“We simply must do everything to carry out mass vaccination in the shortest time possible and stop the terrible disease,” Moscow Mayor Sergei Sobyanin said.

At the same time, Kremlin spokesman Dmitry Peskov said there were no plans to order mandatory vaccinations nationwide.

Russia was among the first countries in the world to deploy a coronavirus vaccine, but its vaccination rates have lagged behind many other nations, with only 18 million people -- or just 12% of the 146-million population -- receiving at least one shot as of early June.

In Moscow, where coronavirus cases have soared in recent weeks, only 1.8 million people, or 14% of the population, have received a shot.

The Russian authorities have reported more than 5.2 million confirmed virus cases and over 127,000 deaths. On Tuesday, officials registered 13,397 new infections, nearly half of which were reported in Moscow.