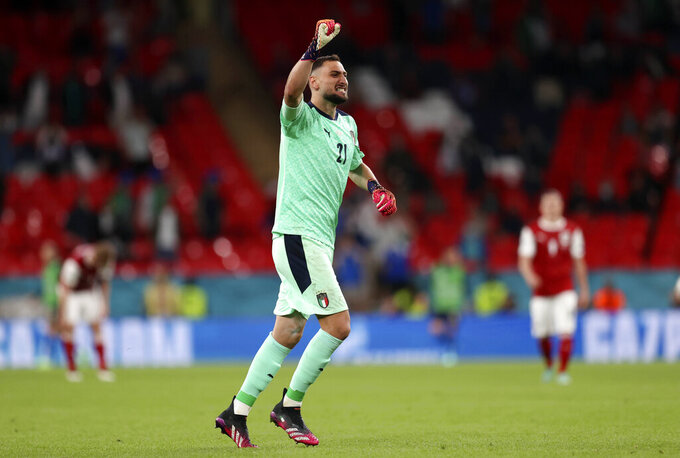 Italy's goalkeeper Gianluigi Donnarumma celebrates during the Euro 2020 soccer championship round of 16 match between Italy and Austria at Wembley stadium in London, Saturday, June 26, 2021. (Catherine Ivill/Pool via AP)

Croatia says forward Ivan Perišić has tested positive for the coronavirus and will miss the team’s game against Spain in the round of 16 of the European Championship.

Croatia says the rest of the squad and coaching staff tested negative.

Perišić scored in the 3-1 victory over Scotland on Tuesday. Scotland was playing without midfielder Billy Gilmour after he tested positive for the coronavirus. No other Scotland players were told to isolate.

Croatia has returned to its home country before going to Copenhagen to face Spain on Monday.

Substitutes Federico Chiesa and Matteo Pessina scored in extra time to help Italy beat Austria 2-1 and advance to the quarterfinals of the European Championship.

Chiesa scored in the fifth minute of extra time and Pessina added the second in the 105th minute.

Sasa Kalajdzic reduced the deficit with a header in the 114th.

Italy will play either defending champion Portugal or Belgium in the Euro 2020 quarterfinals in Munich on Friday.

Italy has set a world record for minutes played without conceding a goal in international soccer.

The previous record was also Italy’s and was set with goalkepeer Dino Zoff in the team. The Italians went 1,143 minutes between 1972 and 1974 without allowing a goal.

Italy surpassed that record in the final minute of its match against Austria in the round of 16 at the European Championship.

The match between Italy and Austria in the round of 16 of the European Championship is heading to extra time.

Austria forward Marko Arnautović had a goal ruled out for offside in the 65th minute. Italy forward Ciro Immobile hit the post in the first half.

Austria is playing in the round of 16 at the tournament for the first time. Italy is looking to set a team record of 31 straight matches unbeaten.

The winner will play either defending champion Portugal or Belgium in the Euro 2020 quarterfinals in Munich on Friday.

Kasper Dolberg scored two goals to give Denmark a 4-0 victory over Wales and a spot in the European Championship quarterfinals.

Denmark has ridden a wave of emotion through the tournament since playmaker Christian Eriksen suffered cardiac arrest in the team’s opening group match and had to be resuscitated with a defibrillator.

Dolberg is former Ajax striker and the match was played at the club’s home stadium in Amsterdam.

Denmark coach Kasper Hjulmand gave Dolberg his first start of the tournament and he scored a goal in each half. Joakim Maehle scored the third goal in the 88th minute and Martin Braithwaite added the fourth in injury time.

The Danes will play either the Netherlands or the Czech Republic in the quarterfinals in Baku on Saturday.

Spain striker Álvaro Morata says deaths threats were made against him and even his sons after his misses in the group stage of the European Championship.

Among Morata’s misses was a failed penalty kick against Slovakia on Wednesday.

Spain’s players have condemned the death threats. Forward Dani Olmo says players accept criticism but more than that is “crossing the line.”

Morata says what upsets him is when fans go to his wife and relatives to makes threats.

Spain will face Croatia in the round of 16 on Monday in Copenhagen.

A framed Wales national team shirt with Christian Eriksen’s name on it was given to Denmark captain Simon Kjaer before the teams played in the round of 16 at the European Championship.

Eriksen collapsed on the field during Denmark’s opening match at Euro 2002 and had to be resuscitated with a defibrillator.

The Wales jersey had “CHRISTIAN” written on top of Eriken’s No. 10 and BRYSIA WELLA underneath. Brysia wella means get well soon in Welsh.

Kjaer, Wales captain Gareth Bale and the three match officials in Amsterdam then posed for a photo with the framed jersey moments before kickoff.

The vast majority of fans at the Johan Cruyff Arena are supporting Denmark in the team’s European Championship match against Wales.

Only a handful of Welsh dragon flags are visible among a sea of Danish flags being waved by about 16,000 fans in Amsterdam for the match in the round of 16.

Wales fans were warned not to travel to the Netherlands because of coronavirus restrictions.

Denmark played all three of its group matches at Parken Stadium in Copenhagen and Saturday’s game should have a similar feel.

The Johan Cruyff Arena is the home of Ajax. The Amsterdam club has a long history of signing Danish players. One of them was Christian Eriksen. The Denmark playmaker suffered cardiac arrest in his team’s first match at Euro 2020 and was resuscitated with a defibrillator.

Czech Republic captain Vladimír Darida is doubtful for Sunday’s game against the Netherlands in the round of 16 of the European Championship.

The team says Darida sustained an unspecified injury during practice on Friday and didn’t participate in pre-match training in Prague.

Czech team spokesman Petr Šedivý says the medical team has been treating Darida and it was not yet clear if he will recover in time for Sunday’s game in Budapest.

Darida’s loss would be a blow for the Czechs. The 30-year-old midfielder is the engine of the team and its most experienced player with 73 international appearances.

The team’s flight to Budapest was postponed until later in the day because of a technical problem with the plane.

Finnish health authorities have detected a spike in coronavirus cases that has been traced to soccer fans returning from neighboring Russia following European Championship matches in St. Petersburg.

The Finnish Institute for Health and Welfare has urged “all passengers who have traveled from St. Petersburg to Finland by any bus company to apply for a coronavirus test.”

Finland played two of its Euro 2020 group games in St. Petersburg, The team faced Russia on June 16 and Belgium on Monday. At least 2,000 Finns are estimated to have traveled to the city for those matches.

The knockout stage of the European Championship has arrived.

Denmark will take on Wales in the first match of the round of 16 in Amsterdam. Italy will then face Austria in London.

The winners will advance to the quarterfinals.

Either Denmark or Wales will go to Baku to face the Netherlands or the Czech Republic on July 3. Italy or Austria will take on Belgium or Portugal on July 2 in Munich.