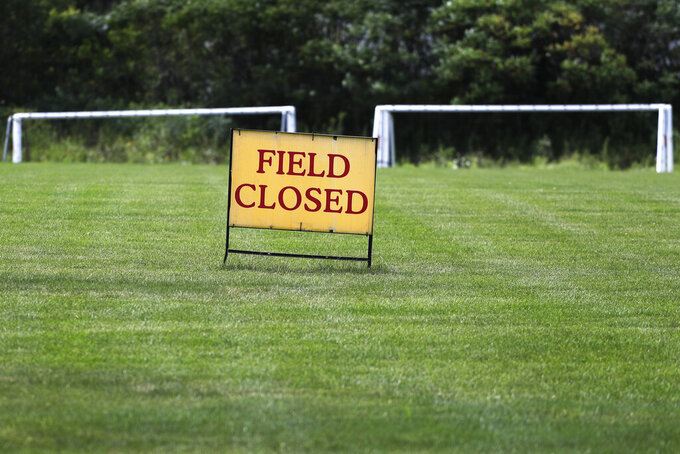 Duke says that 25 athletes have tested positive for the coronavirus over the past three weeks as they began returning to campus for voluntary practice, with nine in mandatory isolation.

The school announced the results Friday night following a total of 700 tests being administered to 309 athletes, coaches and staff. Sixteen athletes tested positive, but have gone through a required isolation period and have been cleared by physicians to return to regular activities.

The school said most of the positive tests came as athletes returned to campus, with all being cases with no or mild symptoms. Treatment of infected athletes included rest, over-the-counter medication and the monitoring of symptoms.

The school said no coaches or staff have tested positive and that no teams have had to pause workouts due to testing results.

The Texas Rangers say broadcaster Matt Hicks is among three people who have recently worked in the home radio booth who have tested positive for COVID-19.

Texas said radio broadcaster Eric Nadel, who has gotten a negative test result, has opted out of working this weekend’s road games against San Francisco from Globe Life Field.

The team said the stadium’s broadcast level and booths were sanitized and disinfected Thursday night.

Virginia says no student-athletes have tested positive for COVID-19 since the last test results were announced a week ago, keeping the total at four since workouts resumed.

The school says three of the positive tests results came in football, and none of the four positives has required hospitalization. In all, the school is testing 235 student-athletes in football, basketball, field hockey, soccer and volleyball.

North Carolina State reported two positive tests for the coronavirus among its latest wave of testing for athletes, coaches and staff.

That brings the Wolfpack to a total of seven positive results among 595 tests administered since the school began the process May 29, a positive rate of 1.2%.

Miami Dolphins linebacker Jerome Baker has been placed on the NFL's reserve-COVID-19 list.

Baker was a team captain last season, when he led Miami with 126 tackles.

Davison started in 12 of 16 games last season and set a career high with 55 tackles. Etling spent most of 2019 on the practice squad and is a candidate for the No. 3 spot behind Matt Ryan and Matt Schaub.

George Washington is discontinuing seven sports programs, three that compete at the NCAA level and four non-NCAA sports, as part of the university’s attempt to address an expected $200 million budget shortfall because of the coronavirus pandemic.

George Washington competes in the Atlantic 10 in most sports. The schools said if the sports can be self-sustaining they would be supported at the club level.

The Pro Football Hall of Fame will be presenting “Road to the Super Bowl” in its theater, but with new protocols due to the coronavirus.

The film recapping the Kansas City Chiefs’ first Super Bowl victory in a half-century is being shown on a 40-plus-foot screen with 15-channel surround sound and was specially created for the Hall’s Super Bowl Theater. The theater has a capacity of 44 viewers but will be limited to nine patrons per viewing. Masks are required throughout the hall per state of Ohio guidelines.

Throughout the museum are 6-foot spacing markers, one-way flow signs, hand sanitizer stations, and styluses given to guests on entry so exhibits are “touchless” to guest hands. ___

“This is one of the most anticipated updates to the Super Bowl Theater in many years,” Saleem Choudhry, vice president of museum exhibit/services says of the film. “The Chiefs Nation has been eagerly anticipating this new edition to the museum experience, and the final production does not disappoint.”

The athletic department says it has conducted 480 tests, with 33 coming back positive. Anyone with a positive result must isolate themselves until further notice, and contact tracing measures are established. Anyone to be found in close contact with the person who tested positive also is quarantined until further notice.

Jacksonville Jaguars defensive tackle Al Woods, who has played for five teams during his 10-year NFL career, is opting out of the 2020 season.

The 33-year-old Woods signed a one-year, $2.75 million deal with Jacksonville in free agency. He played for Seattle in 2019. He also spent time with Indianapolis, Tennessee, Pittsburgh and Tampa Bay since being drafted in the fourth round in 2010. He has 196 tackles and 5 ½ sacks.

“The health and safety of my family has always been the most important thing in my life,” Woods said in a statement. “I love the game of football and will be rooting hard for my teammates this season, and I look forward to rejoining the Jaguars in 2021.”

“We will fully support any of our players and coaches that choose to opt out this season,” Marrone said. “It is important for every individual to feel comfortable and to believe that they’re doing what’s right for themselves and their family. As an organization, we respect Al’s decision and are fully understanding.”

Three more MotoGP races have been canceled because of the coronavirus pandemic.

MotoGP says the races in Argentina, Thailand and Malaysia are off for this year.

The series also added a race in Europe. It will take place in November after the race in Valencia. The venue for the additional race is still to be announced.

Britain has reversed course and now says spectators will not be able to attend sporting events in England because the coronavirus infection rate is rising.

Fans were due to attend horse racing, cricket and snooker in the coming days as part of pilot events but Prime Minister Boris Johnson says fans will no longer gather at sporting events until at least Aug. 15.

They were initially approved to test procedures ahead of a planned wider re-opening of stadiums in October.

The Oval cricket stadium in London has been used as a test for fans returning in the last week.

Formula One driver Sergio Perez says he might have contracted the coronavirus during a trip to Mexico between races in Hungary and Britain.

The Racing Point driver tested positive for COVID-19 on Thursday and will miss Sunday’s race at Silverstone and another the following week at the same track while in isolation.

Perez says he was visiting his mother in Mexico after she was hospitalized following a “big accident.”

Perez says it is “one of the saddest days in my career” missing races “but it just shows how vulnerable we (are) to this virus.”

The Mexican used a private jet to fly home and says he has no symptoms.

The pandemic delayed the start of the season by more than three months.