The Latest: Eagles allowing some fans to game against Ravens 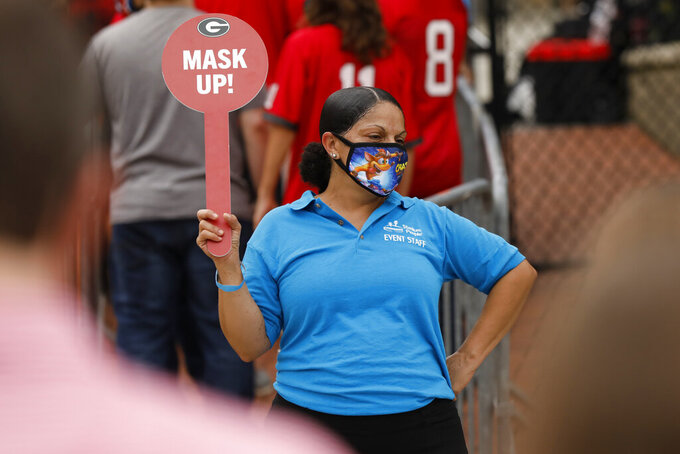 Security reminds fans to mask up before entering Sanford Stadium before the start of the Georgia-Tennessee NCAA college football game in Athens, Ga., on Saturday, Oct. 10, 2020. (Joshua L. Jones/Athens Banner-Herald via AP)

The Philadelphia Eagles will allow fans to attend games, starting Sunday against Baltimore.

The stadium occupancy will be limited to 7,500 people, including players, coaches, team and stadium personnel, media and fans.

Tickets will go on sale Wednesday to season ticketholders who opted into the season.

Face coverings are required in the parking lots and the stadium, except while actively eating or drinking. Fans will be required to maintain six feet of social distance from other fans and stadium staff at all times. Social gatherings or tailgating in the sports complex is not permitted.

One of Europe’s leading ice hockey competitions has canceled its 2020-21 season because of the coronavirus pandemic.

The Champions Hockey League was due to begin next month in an already-shortened format with a knockout bracket and no round-robin.

League CEO Martin Baumann says the board decided Tuesday to cancel because of international travel restrictions and the recent rise in coronavirus cases across Europe.

He says the CHL couldn’t use a centralized “bubble” format because its teams also play in their national leagues, and that using charter flights for clubs wouldn’t be affordable.

The CHL was due to include 31 teams from 12 countries this season after British club Cardiff Devils withdrew. Clubs from Sweden, Finland, Germany, Switzerland and the Czech Republic have historically been the most successful in the format.

South Carolina coach Will Muschamp is confident his team is healthy and safe following its victory at Vanderbilt on Saturday.

Muschamp says the Gamecocks are on schedule to play No. 15 Auburn on Saturday, but the Commodores called off their game with Missouri this week because there aren't enough players due to the need of quarantines for COVID-19.

South Carolina was tested on Sunday, a day after its 41-7 victory over the Commodores. Muschamp said he was told by trainer Clint Haggard there were no concerns about contact tracing following the game.

The National Football Foundation and College Hall of Fame has postponed its annual awards dinner because of the uncertainty created by the novel coronavirus and the challenging economic environment caused by the pandemic.

The dinner was originally scheduled to take place in New York City on Dec. 8.

Plans for honoring the 19-member Hall of Fame class will be announced at a later date.

Senegal’s friendly soccer match against Mauritania has been canceled after eight members of the Mauritanian delegation tested positive for COVID-19.

The Senegalese soccer federation says the tests were conducted under FIFA and African Football Confederation protocols.

It says the results showed eight positive tests among the Mauritanian delegation. It did not specify who tested positive or if they were players or staff.

Barcelona basketball player Nikola Mirotic says he has tested positive for COVID-19 and is out of the team’s Euroleague game at Valencia Basket.

Mirotic says he is “well and following doctors’ instructions.”

The Euroleague canceled last season because of the coronavirus pandemic.

South African golfer Jbe Kruger has been withdrawn from the field in this week’s Scottish Championship on the European Tour after testing positive for the coronavirus.

The tour says Kruger returned the positive test after a check on Monday as part of the pre-tournament screening process. He has not exhibited any symptoms.

Kruger must isolate for a minimum 10 days in accordance with local guidelines in Scotland. The only contact to be identified was Kruger’s wife. She is also his caddie.

Slovakia coach Pavel Hapal has tested positive for the coronavirus and will miss the Nations League game against Israel on Wednesday.

The Slovakian Football Association says Hapal’s assistant, Oto Brunegraf, will be in charge for the match in Trnava.

It says five staff members, including the spokesperson for the national team, have also tested positive and all have left the team’s hotel to self-isolate.

One entire team and another overall contender have withdrawn from the Giro d’Italia following a series of positive tests for the coronavirus.

All riders and team staff members were tested over the last 48 hours coinciding with Monday’s rest day with a total of 571 tests performed.