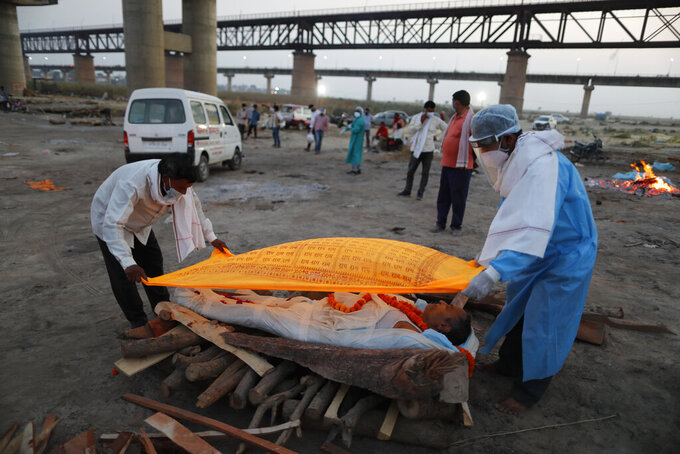 Family members place a cloth on the body of Rajendra Prasad Mishra, 62, who died due to COVID-19 before cremation by the River Ganges in Prayagraj, India, Saturday, May 8, 2021. (AP Photo/Rajesh Kumar Singh)

PARIS — French President Emmanuel Macron welcomed the decision from the European Union not to renew its order for the AstraZeneca COVID-19 vaccine.

Macron said the EU policy is aiming at “responding in particular to the variants... We see that some other vaccines are more efficient.”

The bloc’s Internal Market Commissioner, Thierry Breton, said Sunday the EU Commission has not ordered AstraZeneca shots for after June. Two weeks ago, the EU launched legal proceedings against the pharmaceutical group for allegedly failing to respect the terms of its contract.

South Africa halted earlier this year the use of the AstraZeneca vaccine after preliminary data indicated it may be only minimally effective against the variant which is dominant in the country.

In France, the variant first identified in Britain has become largely dominant and the South African variant represents only a small percentage of the virus detected in the country.

Across the Channel, Britain has made the AstraZeneca vaccine the centerpiece of its successful vaccination campaign.

— India's vaccination campaign falters due to a lack of vaccines even as new infections, deaths soar

— Vaccine deserts: Some countries have no COVID-19 jabs at all

— As US reopens, campuses tighten restrictions for virus

NEW DELHI — India opened vaccinations to all adults this month, hoping to tame a disastrous coronavirus surge sweeping the country, but since then the pace of administering the shots has only dropped, with states saying they only have limited stock.

New infections are still rising at record pace in the world’s second-most populous nation. Alongside a slowdown in vaccinations, states have gone to court over oxygen shortages as hospitals struggle to treat a running line of COVID-19 patients.

India’s Supreme Court said Saturday it would set up a national task force consisting of top experts and doctors to conduct an “oxygen audit” to determine whether supplies from the federal government were reaching states.

Complaints of oxygen shortages have dominated the top court recently, which just stepped in to make sure the federal government provided more medical oxygen to hospitals in the capital, New Delhi.

BARCELONA, Spain — Impromptu street celebrations erupted across Spain as the clock struck midnight on Saturday, when a six-month-long national state of emergency to contain the spread of coronavirus ended and many nighttime curfews were lifted.

In Madrid, police had to usher revelers out of the central Puerta del Sol square, where the scenes of unmasked dancing and group signing esembled pre-pandemic nightlife.

Teenagers and young adults also poured into central squares and beaches of Barcelona to mark the relaxation of restrictions.

“Freedom!” said Juan Cadavid, who was reconnecting with friends. The 25-year-old Barcelona resident was also rejoicing at the prospect of going back to work at a Michelin-star restaurant that has been closed for the past seven months due to pandemic-related restrictions.

BRATISLAVA — Slovakia’s government is set to discuss possible use of Russia’s Sputnik V coronavirus vaccine with Moscow after it was successfully tested in a Hungarian lab.

Slovakian Health Minister Vladimir Lengvarsky said he will talk with his country’s experts and “the Russian side about further developments on this issue.”

Hungary offered Slovakia assistance in inspecting the Russian-made vaccine after the Slovak State Institute for Drug Control said it had not received enough information about the Russian jab from its producer to be able to assess its benefits and risks.

The regulator also said the doses it received from Russia differed from those under review by the European Union’s medicines authority.

The Russian Direct Investment Fund (RDIF), which markets Sputnik V abroad, called the findings “fake news.” It welcomed the results of the Hungarian tests and said it asked the Slovak drug regulator to apologize “for spreading incorrect information about Sputnik V.”

ISLAMABAD, Pakistan — Pakistan is struggling with a third surge of coronavirus cases, despite a complete closure of all business and transport that began this weekend and continues until May 16, the end of the Eid holidays.

All businesses are now closed except for essential food stores, pharmacies and fuel stations. Public transport in major cities and town is either at halt or allowed only with 50% capacity while intercity passenger transport is completely shut. Federal authorities also extended school closures to May 21

After receiving the first consignment of 1.2 million doses of the Oxford-AstraZeneca vaccine on Saturday, the government is trying to ramp up inoculations.

DUBAI — Dubai’s long-haul carrier Emirates will begin shipping aid from the World Health Organization and other groups into India for free to help fight a crushing outbreak of the coronavirus, the airline said Sunday.

The offer by Emirates, which has 95 flights weekly to nine cities in India, initially involves aid already in Dubai but may expand across the carrier’s network as time goes on. That could mean major savings for aid groups as airfreight costs have skyrocketed amid the pandemic. Demand for flown cargo stands at record levels worldwide.

Emirates made the announcement at Dubai’s International Humanitarian City, already home to a WHO warehouse.

A WHO worker on a forklift moved boxes of tents made in Pakistan and rolls of net shades from South Korea preparing for the initial flight planned for next Thursday. That will be used to construct field hospitals for India’s overwhelmed health care system.

ROME — The Italian Health Ministry has set out guidelines for visiting people in nursing homes in the latest sign of reopening in the onetime epicenter of COVID-19 in Europe.

Health Minister Roberto Speranza signed a decree Saturday setting out a plan that, among other things, requires visitors to either be fully vaccinated, have proof of having had COVID-19 and recovered, or a negative test result in the past 48 hours.

As in other countries, Italian nursing homes and long-term residential facilities were devastated by the pandemic, especially during the first wave of infections in the spring of 2020. The total nursing home death toll isn’t known, since so many COVID-19-suspected deaths were not counted because residents were not tested.

Italy has largely reopened after its wintertime lockdown, even though it is continuing to add around 10,000 confirmed infections and around 250-300 deaths per day. The 224 deaths reported Saturday brought Italy’s confirmed toll to 122,694, second only to Britain in Europe.

MADISON, Wisc. — U.S. states asked the federal government this week to withhold staggering amounts of COVID-19 vaccine amid plummeting demand for the shots, contributing to a growing U.S. stockpile of doses.

From South Carolina to Washington, states are requesting the Biden administration send them only a fraction of what’s been allocated to them. The turned-down vaccines amount to hundreds of thousands of doses this week alone, providing a stark illustration of the problem of vaccine hesitancy in the U.S.

More than 150 million Americans — about 57% of the adult population — have received at least one dose of vaccine, but government leaders are doing everything they can to persuade the rest of the country to get inoculated.

The Biden administration announced this week that if states don’t order all the vaccine they’ve been allotted, the administration will shift the surplus to meet demand in other states.

ISTANBUL — Produce markets were allowed to open Saturday across Turkey as the country’s strictest lockdown continues amid an economic downturn with double-digit inflation.

The markets, or “bazaars,” are integral to Turkish food culture. Producers bring their fruits and vegetables to nearly every neighborhood on set days of the week.

The full lockdown that began in late April and is set to last until May 17 has curtailed this tradition and limited it to Saturdays in designated marketplaces.

Idris Taka, a vendor selling vegetables at an open-air market in Istanbul on Saturday, says he has taken a financial hit. “We could work four to five days a week and now we can work one day out of 17 days,” he said.

Critics have said the Turkish government’s measures to fight a surge in cases have been inconsistent and impractical. Residents have been ordered to stay at home, but millions are exempt from the lockdown and continue to work in factories, hospitals, agriculture and tourism. Foreign tourists are also exempt.

Prices continued climbing in April with year-to-year inflation hovering above 17%.

STOCKHOLM — The Swedish military says 200 conscripts have been sent home from a major military exercise involving thousands of soldiers in southern and central Sweden due to a suspected outbreak of coronavirus infections.

The “Sydfront 21” drill with over 3,500 participants from 13 different units of the Swedish Armed Forces is the first major military exercise in the Scandinavian nation since the start of the COVID-19 pandemic.

Exercise leader Maj. Ake Palm told Swedish broadcaster TV4 that the military made the decision to send some soldiers home after several conscripts with cold-like symptoms either tested positive or were suspected to have been infected.

Alf Johansson, head of the exercise’s communications, defended holding the drill in the middle of the pandemic.

“This is a very important exercise for the army to train together so that we can maintain our ability to defend Sweden,” Johansson told the Swedish news agency TT.

Sweden, a nation of 10 million, has recorded just over 1 million coronavirus cases, with 14,173 deaths.

According to a memorandum of understanding signed Friday about 2,000 truck drivers from Alberta who transport goods from Canada to the U.S. will be eligible to be vaccinated at a highway rest stop near Conrad.

The vaccines will be available between May 10 and May 23. A similar program to vaccinate truck drivers from Canada began in North Dakota last month.

The Blackfeet tribe in northern Montana has given around 1,000 vaccines to their relatives and neighbors across the border.

SACRAMENTO, Calif. — The owner of a Northern California bar was arrested on suspicion of selling made-to-order fake COVID-19 vaccination cards to several undercover state agents for $20 each.

The plainclothes agents from California’s Department of Alcoholic Beverage Control were told to write their names and birthdates on Post-it notes. They say bar employees cut the cards, filled out the identifying information and bogus vaccination dates, then laminated the finished product.

Vaccination cards are being used in some places as a pass for people to attend large gatherings. The European Union is considering allowing in tourists who can prove they have been vaccinated.

CHEYENNE, Wyo. -- Wyoming’s governor is barring state officials from requiring people to be vaccinated against COVID-19 before they may have access to state property or services.

Gordon in a statement encourages Wyoming residents over 16 to get vaccinated but calls it “a personal choice based upon personal circumstances.”

Over 180,000 people in Wyoming, or almost one-third of the state’s population, have been vaccinated against COVID-19.