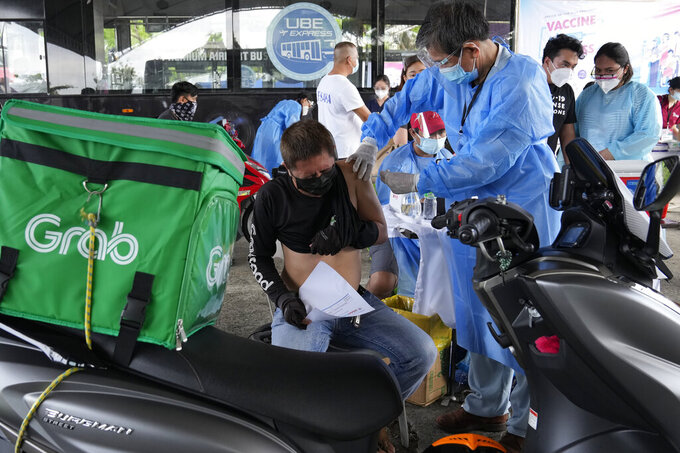 A motorcycle delivery driver is inoculated with China's Sinovac COVID-19 Vaccine at a drive-thru vaccination center in Manila, Philippines, Tuesday, June 22, 2021. The Philippine president has threatened to order the arrest of Filipinos who refuse COVID-19 vaccination and told them to leave the country for hard-hit countries like India and the United States if they would not cooperate with massive efforts to end the pandemic. (AP Photo/Aaron Favila)

HAGATNA, Guam — Guam is launching a vaccine tourism program to encourage citizens of neighboring countries and Americans living in East Asia to come get inoculated against COVID-19.

The Pacific Daily News reports the first group of three travelers was arriving on a charter flight from Taiwan. The Guam Visitors Bureau says this is a prelude to bigger groups to come.

The program is aimed at jump-starting Guam’s tourism industry which has suffered from a decline in travel amid the coronavirus pandemic.

COVID-19 vaccination rates in places like Japan, South Korea and Taiwan have been low compared to the U.S. territory, where vaccines are easily available.

ATLANTA — Georgia’s governor says he will end the state’s public health state of emergency on July 1, more than 15 months after he initially declared it because of the coronavirus pandemic.

Republican Brian Kemp made the announcement Tuesday, signing a fresh extension of the extraordinary powers granted to him by lawmakers that will expire at 12:00 a.m. on July 1.

Kemp becomes the latest in a series of governors nationwide to wind down emergency powers.

This was the first use of Georgia’s public health emergency law. It grants Kemp sweeping powers to suspend laws and state regulations. The governor says he will hold on to some extraordinary powers, saying he will issue a different kind of emergency order.

The Department of Health said it was the biggest one-day increase since the state reported 570 new cases on March 5. The state has had 346,180 cases since the pandemic began last year.

The state’s active cases, meaning ones that don’t include people who have died or recovered, rose by 251 to 2,570. The state’s COVID-19 deaths rose by eight to 5,884. Hospitalizations rose by four to 285.

Arkansas in late March opened its vaccinations to everyone at least 16 years old and lifted its statewide mask mandate, but the state has had one of the lowest vaccination rates in the country.

Gov. Asa Hutchinson cited the latest increase as he urged more people to get vaccinated to stop the spread of the virus. About 41% of the state’s population has received at least one dose of the vaccine and about 33% completed their vaccination, according to the Centers for Disease Control.

“Until we increase the number of shots, we will continue to have increased numbers of hospitalizations and new cases like we did today,” Hutchinson tweeted.

HONOLULU — Hawaii health officials say there is community spread of the COVID-19 delta variant, which was first detected in India.

Two cases on Oahu and one on the Big Island involve travel from the U.S. mainland. One case involves an Oahu resident with no travel history. The state Department of Health said it is “investigating to determine the extent of household and community transmission.”

LOS ANGELES — The Los Angeles Philharmonic will return to the Walt Disney Concert Hall on Oct. 9 after a 19-month closure due to the COVID-19 pandemic.

The 2021/22 season was announced Tuesday by Music and Artistic Director Gustavo Dudamel and executives of the LA Phil.

“Over this past year, the pandemic has isolated us from one another, and so as we celebrate our return to Walt Disney Concert Hall, we want to remember all that unites us, and all that is best in us,” Dudamel said in a statement. “This season, we will blend different musical traditions, bridge geographical borders and build new connections among cultures, communities, audiences and artists.”

More than 10 million doses of vaccine have been administered in Los Angeles County, where rates of new cases, hospitalizations and death have plunged in what was once an epicenter of the pandemic. The daily test positivity rate Monday was just 0.7%.

WASHINGTON — The so-called COVID-19 delta variant which was first detected in India now represents more than 20% of coronavirus infections in the U.S. in the last two weeks, or double what it was when the Centers for Disease Control last reported on the variant’s prevalence.

Dr. Anthony Fauci, the nation’s top infectious disease expert, warned that the U.S. could be following the United Kingdom’s course, where the variant has become the dominant strain due to rapid spread among youth.

Fauci says indications are that the COVID-19 vaccines remain effective against the variant.

The variant is accounting for half of new infections in the regions that include Iowa, Kansas, Missouri, Nebraska, Colorado, Montana, North Dakota, South Dakota, Utah and Wyoming.

HONOLULU — Uncertainty remains about when Hawaii will drop its requirement for vaccinated arriving travelers to have a negative coronavirus test to avoid quarantine.

Hawaii Lt. Gov. Josh Green wants the state to drop the testing requirement for fully vaccinated travelers ahead of the July 4th holiday, but Gov. David Ige is reluctant.

Ige would not commit to dropping the travel test during a Monday news conference. The governor said earlier this month that testing requirements for vaccinated domestic travelers would end once 60% of Hawaii residents are fully vaccinated.

Lt. Gov. Josh Green said there could be confusion and conflict if the state doesn’t drop the requirements soon.

The government said Tuesday that Merkel was vaccinated a few days ago. The 66-year-old received a first shot of the AstraZeneca vaccine on April 16. For the second shot, she received the Moderna vaccine.

Germany recommended in April that younger people who have received a first dose of AstraZeneca should switch to a different vaccine for the second shot.

JERUSALEM — Israel’s prime minister says the country is in the grip of a “new outbreak” of the coronavirus after a spike in cases in the past week, most of them minors with the highly infectious Delta variant of COVID-19.

Naftali Bennett said Tuesday after touring Israel’s main international airport that masks would be mandatory in Ben Gurion Airport and there would be more stringent testing of incoming travelers.

“We made an initial decision to treat this like a new outbreak, and our aim is to sever it,” he said. Bennett called on Israelis to avoid all non-essential summer travel abroad.

MOSCOW — The mayor of Moscow announced new coronavirus restrictions on Tuesday, saying that “the situation with the coronavirus remains very difficult” in the Russian capital.

The country’s state coronavirus task force reported 6,555 new COVID-19 cases in Moscow on Tuesday and 16,715 new infections across Russia, both tallies twice as high as a month ago.

Moscow Mayor Sergei Sobyanin banned all entertainment and sports events at which more than 500 people are present.

Starting next Monday, all restaurants, cafes and bars in Moscow will only allow in customers who have been vaccinated against COVID-19, recovered from the virus within the past six months or can provide a negative coronavirus test carried out within 72 hours prior to the visit. To prove their eligibility, customers will need to obtain a QR code at one of several government websites.

Coronavirus infections surged in the Russian capital two weeks ago, prompting the city authorities to order mandatory vaccinations for workers in retail, education and some other service sectors. Russians have been widely resistant to vaccinations and only less than 13% of the population has received at least one shot of a coronavirus vaccine.

KALAMAZOO, Mich. — Western Michigan University said it will hold a series of drawings, from August to December, to give away more than $100,000 to students who have been vaccinated against COVID-19.

There will be 60 winners. The biggest prizes are five worth $10,000 each. The money can be used for tuition, fees, campus housing and campus dining.

“Students need help with the cost of college, and so we felt like those would really be incentives that would speak to students,” said Diane Anderson, vice president of student affairs.

Students, of course, need to show proof of vaccination..

LONDON — Scottish First Minister Nicola Sturgeon says she is aiming to lift most remaining coronavirus restrictions in Scotland on Aug. 9.

She also told Scottish lawmakers that changes to current restrictions will be postponed by three weeks to July 19 as a result of a sharp spike in new infections that are largely due to the delta variant first identified in India.

She said 2,167 cases have been recorded in Scotland in the past 24 hours, the highest level since Jan. 8 when the U.K. as a whole was in the midst of a catastrophic second wave of the pandemic.

She said her government will make a final assessment nearer the time to see whether this could include the lifting of social distancing rules both indoors and out. l as outdoors.

The other nations of the U.K. — England, Wales and Northern Ireland — are moving out of lockdown at different speeds.

ISTANBUL — Turkey’s president has announced the country’s first local vaccine in development against COVID-19 would be called TURKOVAC.

TURKOVAC is using an “inactivated virus” technology and was developed at Erciyes University. Other vaccine developments continue in Turkey. Turkish President Recep Tayyip Erdogan has said it is imperative to have a local vaccine that Turkey would use in the country and export to others.

Turkey is currently using vaccines from China’s Sinovac and Pfizer-BioNTech. Russia’s Sputnik V will also be used. More than 43,5 doses have been administered with the age category lowered to 25 on Tuesday.

Health Minister Fahrettin Koca said the vaccine is the “pride of the nation.”

PORTLAND, Maine — A program to help the U.S.’s bus companies survive the coronavirus pandemic that was championed by a Maine senator is now accepting applications.

Republic Sen. Susan Collins co-wrote the Coronavirus Economic Relief for Transportation Services grant program and said this week that the program is now open. The program is slated to provide $2 billion in coronavirus relief to bus, motorcoach and other passenger vessel companies.

The pandemic has hit the nation’s approximately 3,000 private bus lines hard. Nearly all of them were shut down in the early stages of the pandemic and many have struggled to recover since.

“Bus and motorcoach companies, ferries, and tour boats sustain good-paying jobs and provide critical transportation services. The COVID-19 pandemic took an enormous toll on these businesses, many of which are small and family owned,” Collins said.

Collins co-authored the proposal with Democratic Sen. Jack Reed of Rhode Island. The senators said that every bus and vessel company that meets eligibility criteria and submits a completed application will receive a grant.

The move announced Tuesday by the European Medicines Agency will help increase production of the vaccine that has formed the backbone of many European nations’ vaccination programs.

The European Center for Disease Prevention and Control says that 242.6 million doses of the Pfizer-BioNTech vaccine have been distributed to European nations and nearly 223 million shots have been administered.

Last month, the EMA recommended expanding the use of the Pfizer-BioNTech vaccine to children aged 12-15.

MERIDIAN TOWNSHIP, Mich. — Michigan is fully open again. After facing 15 months of capacity restrictions and being hit by the country’s worst surge of coronavirus infections this spring, restaurants, entertainment businesses and other venues can operate at 100% occupancy starting Tuesday.

Limits on indoor gatherings like weddings and funerals are gone. So is a broad requirement that the unvaccinated be masked indoors. Michigan is among the last states to lift capacity caps, which has frustrated the business community.

Democratic Gov. Gretchen Whitmer and public health officials say the restrictions were needed until enough residents could be vaccinated.