The Latest: Haiti imposes curfew, mask use for pandemic 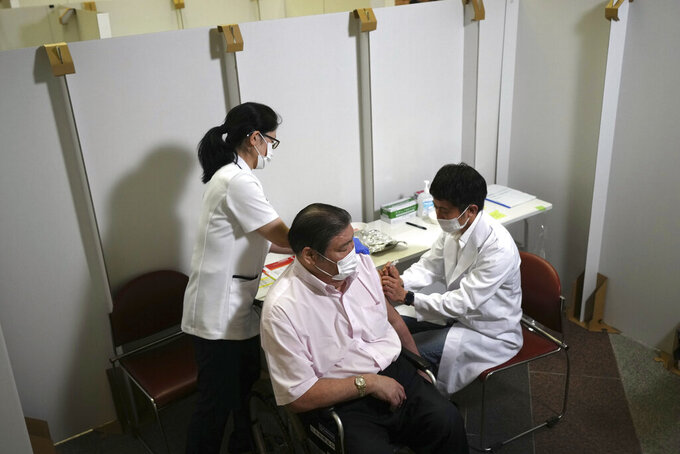 SAN JUAN, Puerto Rico — Puerto Rico has ended a nightly pandemic curfew after more than a year in force and will allow vaccinated visitors to enter the island without a negative coronavirus test result.

The island has been under a curfew since March 2020, when the first coronavirus case was reported. Even when the curfew was sometimes changed, it mostly stayed between midnight and 5 a.m.

Arriving visitors who are not vaccinated will still be required to present a negative coronavirus test or promise to offer a test result within 48 hours. The government intends to impose a $300 fine to those who don’t comply with the testing.

— India passes another grim milestone: 300,000 lost to the virus

— Stories of the virus from a poor U.S. city that has been hit hard

PORT-AU-PRINCE, Haiti — Haiti’s government has imposed a nightly curfew and other restrictions under an eight-day “health emergency” meant to curb the spread of the coronavirus.

All outdoor activity will be banned from 10 p.m. until 5 a.m. under the decree issued Monday by President Jovenel Moise.

The decree also makes the use of face masks mandatory for anyone out in public, while temperature checks and handwashing stations are required for all public or private buildings such as banks, schools, hospitals and markets. Social distancing in public places is set at 1.5 meters (nearly 5 feet).

The president also has ordered public institutions to reduce staff on duty by 50%, while he is encouraging that other employees work from home.

MONTGOMERY, Ala. -- Gov. Kay Ivey on Monday signed legislation banning so-called vaccine passports as Alabama becomes the latest state to try to prohibit proof of a coronavirus vaccination to enter a business, school or event.

The legislation by Republican Sen. Arthur Orr of Decatur would prohibit government entities from issuing “vaccine or immunization passports” or other “standardized documentation for the purpose of certifying immunization status” although standard child immunization forms would be excluded.

It would also prevent people from being denied entry to businesses, universities, and state agencies if they have not been vaccinated for COVID-19. However, the legislation does not specify any penalty for violations.

ROME — The tiny island nation of Malta says it has administered at least one coronavirus vaccine to 70% of its population to lead Europe in the inoculation race.

Health Minister Chris Fearne said 42% of Malta’s people had been completely inoculated. The achievement has led to a 95% decrease in patients being admitted to Malta’s COVID-19 hospital, he said.

With a population of about a half-million, Malta is the smallest European Union member state. It has been using the four vaccines approved by the European Medicines Agency.

According to the ourworldindata.org website, Malta leads even Israel and Britain in administering at least one shot of the vaccine to its population.

Malta has reported some 30,000 cases and 417 deaths, according to the Johns Hopkins University tally.

JUNEAU, Alaska — About 60% of applications for a pandemic rent relief program must still be processed nearly three months after the application deadline.

KTOO Public Media reports the pending applications are among the roughly 25,200 that cleared initial income and documentation hurdles by the Alaska Housing Finance Corp. are awaiting processing.

The program is aimed at helping people who qualify by covering up to a year of rent and utility payments. The application deadline closed in early March. An official with the corporation administering the program says it is moving quickly and noted the high interest in the program.

After-school programs will be available to students from the end of the school day until 6 p.m.

Beutner said, however, that an online option must remain in place for the next school year for students who are unable or choose not to come to schools for in-person instruction.

Students and staff will wear masks until more children are vaccinated, he said.

The superintendent reiterated his assertion that Los Angeles Unified has in place the highest safety standards of any school district in the nation.

ORLANDO, Fla. — Florida is joining a growing list of Republican-led states that plan to end participation in a federal program that gave an extra $300 per week in benefits to the unemployed during the pandemic.

The Florida Department of Economic Opportunity announced Monday that the state will withdraw from the Federal Pandemic Unemployment Compensation program effective June 26.

State labor officials said private-sector employment increased by 18,800 jobs last month and more than 460,000 online job postings were made throughout the state for job seekers.

“Florida’s employers are also seeing employment growth, as more Floridians, including some who completely left the workforce, are now eagerly reentering the workforce,” said Dane Eagle, Secretary of the Florida Department of Economic Opportunity. “Transitioning away from this benefit will help meet the demands of small and large businesses who are ready to hire and expand their workforce.”

At least 22 other states also have announced plans to end the enhanced benefits early.

Florida will continue to participate in other federal pandemic-related unemployment programs aimed at the self-employed, people who already have exhausted their unemployment benefits and gig workers. These federal benefit programs are set to expire in early September.

COLOMBO, Sri Lanka — Sri Lankan government on Monday extended the on-going travel ban for another two weeks as health experts warned of a possible breakdown of the country’s health system due to the current state of the infection.

Sri Lanka is currently under a weeklong travel ban which was scheduled to be eased on May 28. But on Monday, the government announced that the lockdown-style ban will continue until June 07. During this period, the ban will be eased for several hours on two days to allow people to buy food and other essentials from any outlets within the walking distance.

However, the ban will not apply to those engaged in essential services such as health, food supply and power sector and those seeking medical treatment while others are banned from leaving their houses.

The fresh restrictions were imposed as the island’s key medical associations cautioned that the infection is rampant across the country and that the actual number in the community is more than three times the number detected.

According to the latest statistics of the health ministry, Sri Lanka has 161,242 positive cases with 1178 fatalities.

Doctors have predicted that the number of patients could rapidly rise in the next two weeks because of the last month’s celebrations and shopping by the people to mark the traditional new year.

SAN FRANCISCO — The ride hailing companies Uber and Lyft have started providing free transportation to and from COVID-19 vaccination sites in the United States.

Uber said Monday that it will provide four rides valued at up to $25 each through July 4 while Lyft has said that it is offering two rides of up to $15 each.

The federal government said earlier this month that it would partner with the ride-hailing companies to encourage more Americans to get vaccinated as the pace of the shots nationally started to decline.

President Joe Biden has set a goal of delivering at least one dose of vaccine to 70% of adult Americans by Independence Day and fully vaccinating at least 160 million by then.

GENEVA — French President Emmanuel Macron and German Chancellor Angela Merkel are among those rallying around efforts to strengthen the World Health Organization and the fight against pandemics as the U.N. agency opened its annual assembly with a draft resolution in the works that acknowledges missteps in the response to COVID-19.

The European Union and Vanuatu are behind the resolution that would create a working group on strengthening WHO’s readiness and response to health emergencies.

“We have to have institutions that are up to the task, that meet our ambitions,” Macron said by video during the mostly virtual meeting. WHO, he said, must be “robust” and “flexible” in times of emergency and crisis. “And it must be completely transparent to make sure that people trust the organization.”

Merkel threw her backing behind the idea of a “global health threat council” and said leaders should provide WHO with “lasting financial and personal support.”

The resolution would set up a six-person working group to report to the assembly next year. The text acknowledges “serious shortcomings” in the world’s ability to prepare, prevent, detect and respond to health emergencies.

LONDON — British health officials expressed optimism Sunday that the coronavirus restrictions remaining in England can be lifted in June after an official study found that the Pfizer and AstraZeneca vaccines offer effective protection against the variant first identified in India.

PARIS — The French foreign minister says it’s possible that France will introduce stricter coronavirus restrictions for British visitors when tourism reopens this summer, to prevent the spread of a worrying virus variant first detected in India and causing concern in Britain.

BRASILIA, Brazil — Brazil’s health minister said the government is concerned about the coronavirus variant first identified in India after the first cases of it were confirmed in the South American country.