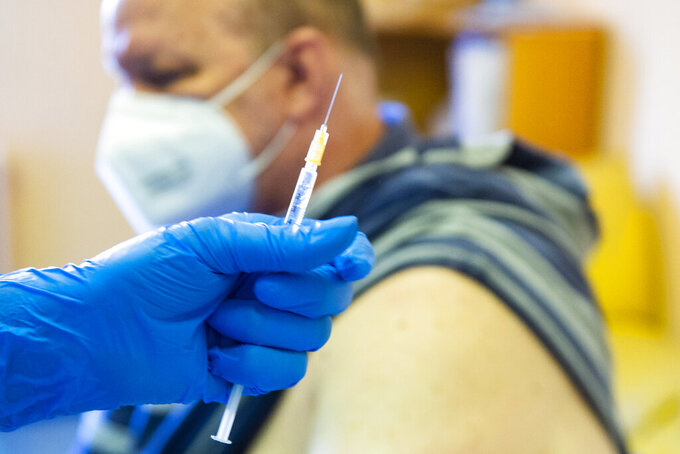 HONOLULU — Hawaii’s governor is extending for two more months an eviction moratorium that he implemented during the coronavirus pandemic, but says he doesn’t expect to keep it longer than that.

The existing emergency order instituting a pause on evictions was due to expire Tuesday, but Gov. David Ige extended it 60 days to Aug. 6.

During an interview on the Honolulu Star-Advertiser’s Spotlight Hawaii livestream program, the governor noted the legislature has passed a bill encouraging landlords and tenants to work out payments for past rent to prevent evictions. He didn’t say whether he will sign the measure but says he thinks it is “important.”

He also notes that rent and mortgage relief is available.

— US jails emptied in the pandemic. Should they stay that way?

— India cautiously starts to open up as virus cases decline, but families are dealing with the devastation

— China trade surges as demand rebounds in US, other markets where pandemic is waning

— Polio: When vaccines and re-emergence were just as daunting

The “Joints for Jabs” program announced by state officials Monday will permit pot retail shops to give away a single pre-rolled joint to anyone over 21 who gets a shot at an on-site vaccine clinic by July 12.

The state already lets breweries, wineries and restaurants offer free drinks in exchange for proof of vaccination. Other incentives include free sports tickets and prize money of up to $1 million.

The idea is to persuade more people to become vaccinated. Gov. Jay Inslee intends to lift all pandemic restrictions at the end of the month or sooner if 70% of those over 16 have received at least a first vaccine dose.

SANTA FE, N.M. — The New Mexico Supreme Court says the state has no obligation to compensate businesses for financial losses and expenses due to emergency health orders during the COVID-19 pandemic.

The unanimous opinion Monday scuttles about 20 lawsuits filed last year in district court. The original plaintiffs argued that aggressive health restrictions from the state government constituted a regulatory taking much like the taking of land for public works projects.

Gov. Michelle Lujan Grisham had urged the Supreme Court to block the lawsuits. The governor has signed into law a variety of temporary grants, minimal-interest loans and tax breaks for businesses in response to the pandemic.

The company says it is in talks with Florida Gov. Ron DeSantis’ staff and attorneys “to ensure that we can offer the safest cruise experience for our passengers.”

Carnival Cruise Line, also based in Miami, announced sailings from the Port of Galveston, Texas, with vaccinated guests and is working with Florida officials for a ship to leave from PortMiami.

NEW YORK—New York will lift more COVID-19 rules once 70% of adults have at least one shot of a COVID-19 vaccine, a target that Gov. Andrew Cuomo says he hopes his state could reach in days.

Once New York hits the 70% target, unvaccinated people will still have to wear masks and stay 6 feet (about 1.8 meters) from others on subways and buses, large-scale event venues, schools, nursing homes and hospitals. The state will lift any remaining health screening, contact tracing and cleaning and disinfection rules elsewhere.

PHILADELPHIA — Philadelphia will be giving away cash prizes as part of a multiweek lottery to entice residents to get vaccinated for COVID-19.

Each of three drawings will award 12 prizes, with half being reserved for people in a designated under-vaccinated ZIP code.

Philadelphia’s first drawing on June 21 includes six $1,000 prizes, four $5,000 prizes and two $50,000 prizes. People living in the 19126 ZIP code in north Philadelphia will be awarded half the prizes in those categories. City officials say that ZIP code is one of the 20 least vaccinated in the city and was chosen at random.

GENEVA — The emergencies chief of the United Nations health agency says COVID-19 vaccination coverage of over 80% percent is needed to significantly lower the chance that an imported coronavirus case could generate new cases or spawn a wider outbreak.

Dr. Michael Ryan of the World Health Organization said that ultimately, “high levels of vaccination coverage are the way out of this pandemic.”

His comments in Geneva to reporters on Monday come as rich nations with access to vaccines are facing pressure from WHO and many global health advocates to share more doses with developing countries that are gravely lacking in access to them.

Britain has been looking at a recent uptick in cases attributed largely to an increase in cases linked to the so-called delta variant, which originally appeared in India -- a former British colony.

Maria Van Kerkhove, WHO’s technical lead on COVID-19, noted that the delta variant is spreading in more than 60 countries, and is more transmissible than the alpha variant - which first emerged in Britain.

COLUMBIA, S.C. -- Gov. Henry McMaster has brought an end to South Carolina’s pandemic-related state of emergency, saying the coronavirus situation in the state had improved to the point that it was no longer needed.

McMaster said Monday that now “we need to proceed on the course that we have set out, and be careful.”

The governor has issued 30 separate emergency declarations throughout the pandemic, creating a mechanism though which he could issue executive orders allowing him to set temporary policies aimed at reining in the spread of COVID-19.

McMaster never used his powers to implement a comprehensive statewide mask rule, instead calling on South Carolinians to show personal responsibility in practicing social distancing and other public health guidelines. He did order, and has since rescinded, several specific statewide orders that required masks in state government buildings and restaurants.

GENEVA — The emergencies chief of the United Nations health agency says coronavirus vaccination coverage of over 80% percent is needed to significantly lower the chance that an imported case could generate new infections or spawn a wider outbreak.

Dr. Michael Ryan of the World Health Organization said that ultimately, “high levels of vaccination coverage are the way out of this pandemic.”

His comments in Geneva to reporters on Monday come as rich nations with access to vaccines are facing pressure from WHO and many global health advocates to share more doses with developing countries that are gravely lacking in access to them.

Britain has been looking at a recent uptick in cases attributed largely to an increase in cases linked to the so-called delta variant, which originally appeared in India -- a former British colony.

PORTLAND, Maine — Health authorities in Maine, one of the most vaccinated states in the nation, on Monday reported the fewest number of new COVID-19 cases since last fall.

AMSTERDAM — Moderna Inc. has filed a request with the European Medicines Agency for its COVID-19 vaccine to be granted authorization for use in adolescents.

In a statement on Monday, Moderna said it had filed data for a conditional marketing approval in the 27-nation EU bloc to expand its coronavirus vaccine to children, beyond the green light it received in January for use in adults 18 and over.

If authorized, it would be the second COVID-19 vaccine for children to be cleared in the EU. Moderna has also filed for authorization to use its vaccine under emergency use regulations in the U.S. and Canada.

Slovakia has 200,000 doses of Sputnik V vaccine available and approved its use on May 26. But so far, only about 5,000 people have registered to receive the two-shot vaccine in the nation of 5.4 million.

Hungary was the first EU nation to use Sputnik V, which has not been authorized by the European Medicines Agency.

Slovakia has been administering the Pfizer, Moderna and AstraZeneca jabs, and will also use Johnson & Johnson. All of those vaccines have been authorized by EMA.

Sputnik V is administered to people 18 to 60 and is available in eight vaccination centers.

BEIJING — Residents of the southern Chinese city of Guanzhou will not be able to leave unless they can show that it is absolutely necessary to do so, following an outbreak of COVID-19 that has sickened dozens of people in recent days.

Anyone who is given permission to leave must show a negative test for the virus taken in the previous 48 hours, according to rules issued by the city government that take effect Monday. The same rule applies to anyone seeking to leave the surrounding province of Guangdong.

The city also is restricting indoor dining, conducting mass testing and banning residents in high-risk neighborhoods from leaving their homes. At least two districts in the city of 18 million people have been closed off entirely.

The variant causing the Guangzhou outbreak — the delta variant first identified in India — is reportedly more infectious because those who have it are slower to display symptoms while carrying more virus particles.

Guangzhou has reported no deaths from the outbreak, but the city reported another four locally transmitted cases in the 24 hours before Monday morning, bringing its recent total to more than 100 since May 21.