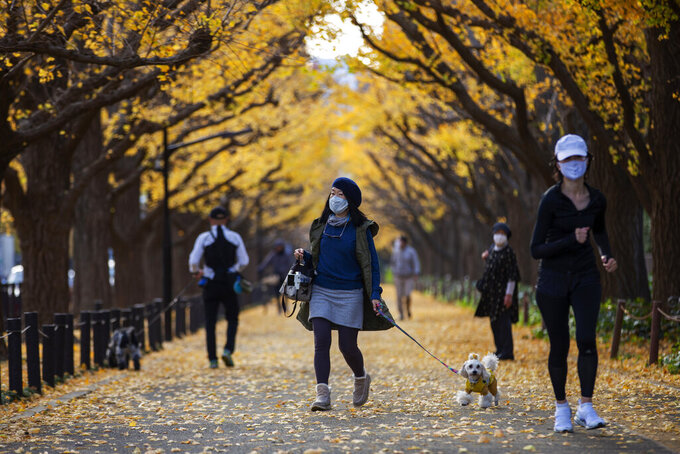 People wearing protective masks to help curb the spread of the coronavirus walk through the row of ginkgo trees along the sidewalk as the trees and sidewalk are covered with the bright yellow leaves Friday, Nov. 27, 2020, in Tokyo.(AP Photo/Kiichiro Sato)

MIAMI (AP) — SPRINGFIELD, Ill. — Illinois has risen above 12,000 deaths from COVID-19, while also surpassing the 700,000 mark for confirmed coronavirus infections.

The latest 1,000 deaths were recorded in just nine days — matching the state’s deadliest period previously in the pandemic in late April and early May, according to an Associated Press review of the data.

After a quiet summer, the virus aggressively returned in October. The number of confirmed coronavirus cases jumped from 500,000 to 700,000 over the past 17 days.

— The pandemic is turning this into a holiday shopping season like no other. Toy companies are targeting stuck-at-home grown-ups with latte-smelling Play-Doh and Legos that turn into Warhols.

— The deluge of “Dear Santa” letters pouring into a French post office that sorts and responds to Kris Kringle’s mail offers a glimpse into the worries and hopes of children around the world awaiting a pandemic-hit Christmas.

— Greece has moved all school and university classes to a remote format. State television is making and broadcasting lessons, while teachers speak to students online from empty classrooms.

The Health Department said the situation constituted an “alert,” and said that nationwide, infections had risen by over 8% last week.

Most of the newly-reported infections occurred in previous weeks, but tests results were reported Friday. The rise was greatest in Mexico City, where detected infections rose by over 34% last week.

City authorities have increased testing in the capital, including the use of antigen tests, and said that the larger number of tests may account for the rise.

In most parts of Mexico, only people with serious symptoms are tested, leading to an undercount of infections.

ATLANTA — A panel of U.S. advisers will meet Tuesday to vote on how scarce, initial supplies of a COVID-19 vaccine will be given out once one has been approved.

Experts have proposed giving the vaccine to health workers first. High priority also may be given to workers in essential industries, people with certain medical conditions and people age 65 and older.

Tuesday’s meeting is for the Advisory Committee on Immunization Practices, a group established by the CDC. The panel of experts recommends who to vaccinate and when -- advice the government almost always follows.

LOS ANGELES — Los Angeles County has announced a new stay-home order amid a surge in coronavirus cases in the nation’s most populous county.

The three-week order takes effect Monday. It was announced Friday as the county confirmed 24 new deaths from COVID-19 and 4,544 new virus infections. Nearly 2,000 people in the county are hospitalized.

The order advises people to stay home “as much as possible” and to wear face coverings when they go out. It bans people from gathering with others who aren’t in their households, publicly or privately. Church services and protests are exempted as “constitutionally protected rights.”

Businesses can remain open but with limited capacity. Beaches, trails, and parks also will remain open.

His campaigned announced Friday that the former Miami-Dade County mayor and his wife, Lourdes, tested positive Thursday for COVID-19 after having mild symptoms.

They said they’re self-isolating at home, in accordance with Centers for Disease Control and Prevention guidelines and advice from medical professionals.

“I will continue attending New Member Orientation virtually and preparing our office to serve the people of Florida’s 26th Congressional District from Westchester to Key West until I can resume my normal schedule,” Gimenez said in a statement. “I am extremely grateful for all of the incredible health care workers who are tirelessly dedicated to their patients.”

Gimenez served as Miami-Dade mayor from 2011 until this month. The Republican won his congressional race in the Nov. 3 general election and is set to assume office Jan. 3.

BRUSSELS — Belgium has relaxed some rules imposed to contain the coronavirus resurgence but is remaining strict on family gatherings over Christmas.

Now that all the virus indicators are declining, the government said Friday that non-essential shops could open under restricted conditions next week. Prime Minister Alexander De Croo said that beyond containing the virus, everyone had to make sure that loneliness did not strike.

“We must also be sure that during Christmas and New Year people are not alone, so that is why on the evening of December 24 or 25 isolated people, people living alone, will have the possibility to invite up to two people inside their home,” De Croo said.

One of the hardest-hit countries in Europe, Belgium has reported more than 16,000 deaths linked to the coronavirus.

LAWRENCE, Kan. — Holiday traditions have been upended across Kansas due to the coronavirus, forcing Santa to stay firmly on the ground in one city and transforming parades elsewhere.

In Lawrence, hundreds usually turn out on the Friday after Thanksgiving to watch firefighters use a ladder truck to rescue Santa from the top of Weaver’s Department Store.

But that’s not happening this year as the pandemic strains hospitals.

Instead, Santa will appear on the first three Saturdays of December atop a truck decked out in garlands, poinsettias and pine cones, the Lawrence Journal-World reports.

The city’s hospital, Lawrence Memorial, has been converting more rooms for COVID-19 patients and 26 coronavirus patients were being treated there on Friday.

SIOUX FALLS, S.D. — South Dakota on Friday reported 39 deaths from COVID-19, pushing the state to record more deaths in November than all other months of the pandemic combined.

The state’s tally of COVID-19 deaths stands at 888 after the Department of Health reported the death records from a two-day period stretching over the Thanksgiving holiday. The total number of deaths has more than doubled since November began, with 463 reported this month.

MINNEAPOLIS — The Minnesota Department of Health has reported 101 more COVID-19 deaths, the first time the state has topped 100 single-day deaths since the start of the pandemic.

More than 1,800 patients are hospitalized, including more than 380 in intensive care, as dramatic case growth over the past month has led to increasing hospitalizations and deaths.

The figures reported on Friday reflect data acquired by the health department as of Wednesday.

DES MOINES, Iowa -- Iowa has reported that 37 people died of the coronavirus in the past day.

The state Department of Public Health on Friday said the additional deaths bring the total to 2,349.

In the past 24 hours as of Friday morning, there were 1,266 new confirmed cases.

Iowa has long had some of the nation’s highest coronavirus infection rates, but in the past week its numbers have improved slightly.

Oxford and AstraZeneca reported Monday that their vaccine appeared 62% effective in people who received two doses and 90% effective when volunteers were given a half dose followed by a full dose. They later acknowledged a manufacturing issue had resulted in a half dose mistakenly being administered as the first dose to some participants.

Dr. Soumya Swaminathan, WHO’s chief scientist, said at a Friday news conference that “the numbers are still too small to really come to any definitive conclusions.”

In the study, 2,741 people got a half dose followed by a full dose while 8,895 people got two full doses. None of the people in the half-dose regimen were over age 55.

Swaminathan said the agency had heard AstraZeneca would like to conduct a full study testing the half dose followed by a full-dose regimen, noting that the other ongoing research evaluating the vaccine uses two full doses.

LONDON — Ireland is easing its coronavirus restrictions, with most businesses allowed to reopen next week.

For six weeks, Ireland has been under tight restrictions, with many businesses shut and people restricted to a 3-mile (5-kilometer) radius of their home.

The government says shops, hairdressers, gyms, cinemas, museums and galleries will be allowed to open starting Tuesday, and religious services can resume. Restaurants and pubs that serve food will be able to open from Dec. 4, though bars that only serve drinks have to stay shut.

Ireland plans to ease restrictions further over Christmas, allowing people to travel and up to three households to gather between Dec 18 and Jan. 6.

Ireland, with a population of almost 5 million, has recorded more than 2,000 coronavirus-related deaths.

Prime Minister Micheal Martin acknowledged the hardship many faced, but said the nation’s “sacrifices” were working and had driven down the infection rate to one of the lowest in Europe.

TORONTO — Canadian Prime Minister Justin Trudeau says he expects more than half of Canadians to receive a COVID-19 vaccine by next September.

Trudeau’s government is facing criticism after he said Canada will have to wait for a vaccine because the first ones that roll off assembly lines are likely to be given to citizens of the country they are made in. He noted earlier this week that the United States, the United Kingdom and Germany have mass vaccine-production facilities but Canada does not.

Trudeau says Canada has signed deals that could give it the most per capita vaccines in the world. But when Canadians will get the first doses remains an open question. Toronto is on lockdown and the country’s largest province of Ontario is reporting a record 1,855 cases on Friday.

GENEVA — Scientists at the World Health Organization estimate that about 60 to 70% of people in countries will need to be vaccinated against the coronavirus to achieve any type of herd immunity.

At a press briefing on Friday, WHO vaccines expert Dr. Kate O’Brien said it was still unclear if vaccines against COVID-19 might reduce the amount of time people are infectious or their ability to spread the virus. But she said modelling studies suggest up to 70% of the population will need to be immunized so that people are protected from the disease.

“It’s really important that we actually start to get more information about what the vaccines do, not just for preventing disease, but for actually preventing the acquisition of the virus,” said O’Brien, director of the U.N. health agency’s department of immunization, vaccines and biologicals.

Dr. Michael Ryan, WHO’s emergencies chief, noted that in some situations, targeting certain groups for vaccination may be more important than immunizing the entire population.

“We’ve seen in many clusters that only 20% of the cases go on to transmit to others, 80% don’t transmit to anybody else,” he said. “I think we’ll need to be much more surgical and precise in exactly who we target for vaccination. It may be much more important to target certain sections of the community.”

PHOENIX — Arizona has reported more than 4,000 additional confirmed COVID-19 cases for the third time in a week as related hospitalizations continued to increase during the current surge in the pandemic.

The dashboard reported that 2,301 people were hospitalized for COVID-19 as of Thursday, including 532 in beds in intensive-care units.

Rep. Andrés Cano, a Democrat, announced on social media Wednesday that he is in isolation but is not symptomatic. Cano was reelected this month.

Last week, Democratic Rep. Arlando Teller of Chinle announced he also tested positive and was isolating. The most serious case involved Rep. Lorenzo Sierra, who spent several days on a ventilator after becoming ill in October. He has now recovered.