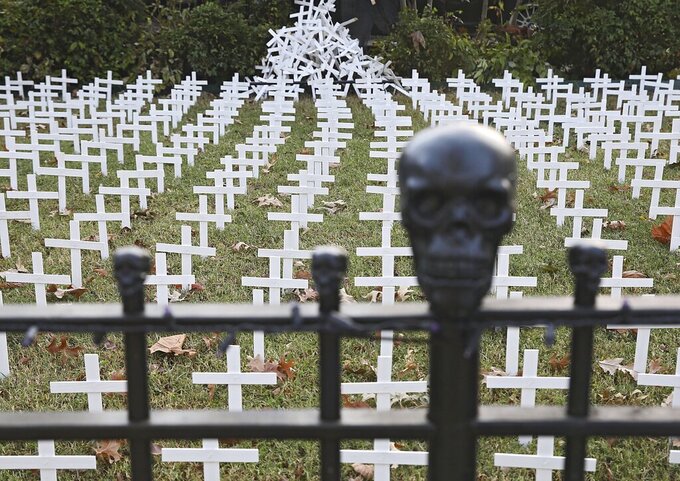 Toby Gregory's yard that is adorned with 1,006 white crosses to represent Oklahoma deaths due to COVID-19, Wednesday, Oct. 14, 2020, in Tulsa, Okla. Gregory was able to keep up with the state death toll until last week, and then it became too many. He says he doesn't have the room or supplies to keep up with the current death toll, but will do about 50 more crosses. (Mike Simons/Tulsa World via AP)

LONDON — Ireland’s government is putting the country at its highest level of coronavirus restrictions for six weeks in a bid to combat a rise in infections.

People are being asked to stay at home, with exercise allowed only within a 5-kilometer (3-mile) radius of their home. Only essential stores can open. Restaurants and bars can provide only takeaway service. No social or family gatherings will be allowed in homes or private gardens, but schools will remain open to prioritize education.

— Coronavirus vaccines will require non-stop refrigeration to stay potent and safe, which may leave 3 billion people without access to them

— To avoid the economic hit of full lockdowns, some places are trying more targeted restrictions

— Congress is past the point of being able to deliver more coronavirus relief before the Nov. 3 election

SACRAMENTO, Calif. — California Gov. Gavin Newsom says the state won’t allow distribution of coronavirus vaccines until it is reviewed by the state’s own panel of experts.

Newsom said Monday that California wants its own independent review no matter who wins the presidential election next month.

The governor named 11 doctors and scientists to review any rollout of vaccines by the federal government or vaccine developers. The board members hail from top California top universities and medical providers, along with state and local public health officials.

Newsom’s position pledge raises the possibility that California’s 40 million residents might not receive a vaccine as distribution begins in other states.

SALEM, Ore. -- As Oregon's total number of confirmed coronavirus cases since the start of the pandemic nears 40,000, state health officials say face-covering requirements are being expanded.

Currently, Oregonians are required to wear masks at indoor public spaces and outside where they cannot maintain six feet of space between others. Health officials said Monday that they are expanding the guidance to include all private and public workplaces, including classrooms, offices, meeting rooms, colleges, universities, outdoor markets and private career schools.

AUSTIN, Texas -- Health officials in Texas have reported 4,319 COVID-19 hospital patients, the most since Aug. 28.

The state estimated Monday that 82,930 coronavirus cases are active in Texas. That is about a third more than the 64,431 reported a month ago, on Sept. 20.

In Houston, schools in the state’s largest school district resumed in-person classes Monday for the first time since campuses doors were closed in March when the coronavirus came to Texas.

JACKSON, Miss. — Mississippi Gov. Tate Reeves says he is imposing a mask mandate for public indoor spaces and other restrictions in nine of the state’s counties to curb the spread of the coronavirus after weeks of steadily rising case numbers.

Reeves notes that Mississippi saw a spike in cases during the summer. He says: “We know what can happen if we allow this to get out of control, so want to be proactive to prevent that from happening.”

The governor adds that he does not think what is happening in Mississippi qualifies as a spike, saying that “we’ve seen a relatively slow, slight increase over the last six weeks.”

In the past week, Mississippi has had two days when the daily number of new cases reached more than 1,000. That hadn’t happened since mid-August.

SANTA FE, N.M. -- New Mexico Tech has temporarily shut down out of caution against COVID-19 after officials learned of several off-campus weekend parties.

In announcing the school's closing on Monday, University President Stephen Wells said on the school’s website that 50 to 100 students gathered over the weekend at multiple parties in the area surrounding the Socorro campus. Wells says extreme measures are needed due to “the irresponsibility of a few.”

State health officials on Monday reported an additional 518 confirmed coronavirus cases, bringing the statewide total to more than 37,300 since the pandemic began.

OKLAHOMA CITY — The president of the Oklahoma State Medical Association is renewing the group’s call for a statewide mask mandate as the number of people hospitalized due to the coronavirus has reached record levels.

Association President George Monks says in a tweet that cities in Oklahoma that have adopted mask ordinances have seen lower rates of infection. He says that “we need face mask mandates to protect more of our Oklahoma citizens.”

The association has been calling for a statewide mask mandate since the summer, but Gov. Kevin Stitt has repeatedly said he has no plans to do so, citing concerns about how such a mandate would be enforced.

OWOSSO, Mich. — A lawyer says misdemeanor charges are being dropped against a Michigan barber who defied Gov. Gretchen Whitmer and reopened his shop last spring during the coronavirus pandemic.

David Kallman said Monday that the case against Karl Manke of Owosso fizzled after the Michigan Supreme Court on Oct. 2 said Whitmer used an unconstitutional law as the foundation for emergency orders to control the virus.

Barbershops and salons were closed for months until June 15. But Manke, 77, reopened in early May, declaring that “government is not my mother.”

He inspired people from all over Michigan to drive to his shop for a haircut. Manke cut hair on the grounds of the state Capitol during a protest in May.

Kallman said state regulators still are trying to revoke his barber license. A hearing is set for Nov. 19.

RENO, Nev. — Skiing and snowboarding won’t be much different on the slopes when Lake Tahoe ski resorts begin reopening next month but a variety of changes are planned indoors because of COVID-19.

Capacity limits will be in place and some resorts are adopting reservation systems but masks and social-distancing requirements won’t faze skiers. Mount Rose spokesman Travis Bennett says the beauty of the ski industry is social distancing already exists. Wearing face coverings, masks and gloves are part of normal attire.

Diamond Peak will implement a reservation system for tables in the lodge. The number of people who enter restaurants and lodges at Heavenly, Kirkwood and Northstar will be monitored. At Sugar Bowl and Boreal, indoor use will be limited to restrooms or using a warming zone for 15 to 20 minutes.

Some resorts won’t allow non-skiing friends and family members to lounge in their lodges.

At least outdoors, he says it’s going to be business as usual. The first slopes are scheduled to open Nov. 20.

COLUMBIA, S.C. — Authorities in South Carolina say they broke up a party where at least 2,000 people were gathered without taking precautions to prevent spreading the coronavirus.

DeSumma said some people threw bottles at crews as they arrived to answer a medical call. Sheriff’s deputies and university police helped break up the party after fire officials declared it an imminent danger.

No citations were issued to partygoers, DeSumma said, but not wearing a mask is a civil infraction with a fine up to $25, and businesses face a $100 penalty, according to a pandemic ordinance in Richland County.

ISLAMABAD — Pakistan’s prime minister Imran Khan has warned that his countrymen in big cities could face the second wave of COVID-19 in the coming weeks in winter because of an increase in pollution level.

In Monday’s televised remarks at a gathering in Islamabad, he urged people to continue adhering to social distancing rules to help authorities in their efforts aimed at containing the spread of coronavirus.

Khan’s remarks come amid a slight increase in COVID-19 cases and deaths in recent weeks.

GENEVA — The head of emergencies at the World Health Organization says Asia’s “follow-through” in the fight against COVID-19 and its populations’ greater trust in and compliance with their governments have given the continent a leg up against the coronavirus.

As Europe grapples with big surges in case counts in recent days, Dr. Michael Ryan said that if he had one “golden wish” that “might change the game,” it would be to make sure that every contact of a confirmed COVID-19 case would undergo quarantine to break the chains of transmission.

Countries like China, South Korea and Japan, which had experience against earlier respiratory disease outbreaks, have been able to implement measures longer than their counterparts in places like Europe and North America that continued to struggle against the pandemic, he said.

Ryan noted the ability of Asian nations to restart tracing, quarantine and isolation activities when needed.

Such countries had “serious follow-through once they got the numbers down. They followed through,” Ryan said.

MADRID — Regional authorities across Spain continue to tighten restrictions against a sharp resurgence of coronavirus infections that is bringing the country’s cumulative caseload close to one million infections, the highest tally in western Europe.

Nearly 38,000 new cases were reported Monday, bringing the total since the onset of the pandemic to 974,449. Meanwhile, fatalities climbed to 33,992, with 217 confirmed deaths for COVID-19 recorded since the health ministry’s last data update on Friday. Experts agree that the real toll of the pandemic is much higher due to missed cases.

Restrictions renewed in some regions include caps on the amount of people allowed to meet indoors or outdoors and early closing times for businesses and restaurants, among others.

ROME — Italy added another 9,338 confirmed coronavirus infections to its official toll as the government implemented new restrictions to curb nightlife and socializing in hopes of slowing the resurging outbreak.

Another 73 people died, bringing Italy’s official COVID-19 toll to 36,616, the second-highest in Europe after Britain.

Monday’s health ministry update reflected the typical reduction in confirmed new cases following weekend testing lulls: Whereas tests had topped 160,000 by the end of last week, only 99,000 tests were performed over the last 24 hours.

Hospital officials are voicing increasing alarm at the growing number of intensive care admissions — 797 as of Monday. While hospitals may have enough ventilators in this second wave of the outbreak, they don’t have enough medical personnel to operate them, Dr. Roberto Parrella of Naples’ Cotugno hospital told Sky TG24.

Premier Giuseppe Conte’s cabinet on Sunday approved new restrictions short of a curfew or lockdown to try to tame the infection.

CONCORD, N.H. — New Hampshire is asking the U.S. Supreme Court to block Massachusetts from collecting income tax from roughly 80,000 New Hampshire residents who are employed by Massachusetts companies but have been working from home during the coronavirus pandemic.

New Hampshire filed a lawsuit Monday challenging a temporary rule that requires residents of other states who were working in Massachusetts before the pandemic to pay Massachusetts’ 5.05% income tax while they work from home.

MILAN — Milan’s La Scala theater said Monday that the cast of “Aida” has been put under quarantine after two members tested positive for coronavirus.

It is the first change in program due to positive tests at the Italian venue, one of Europe’s premiere opera houses. It underlines the difficulties facing the opera world due to the virus.

La Scala opened a restricted fall season with concerts instead of full operatic performances and with less than half of the house full, to allow distancing to be maintained both on and off stage.

But with the virus spiking in Milan, it has delayed announcing plans for December-March. La Scala said that it tested the entire cast after one performer resulted positive, and that a second infection was confirmed.

Now with the whole cast in quarantine, the opera house on Monday will instead stage a concert of arias and opera choruses from “Aida,” “Nabucco” and “La Boheme.”