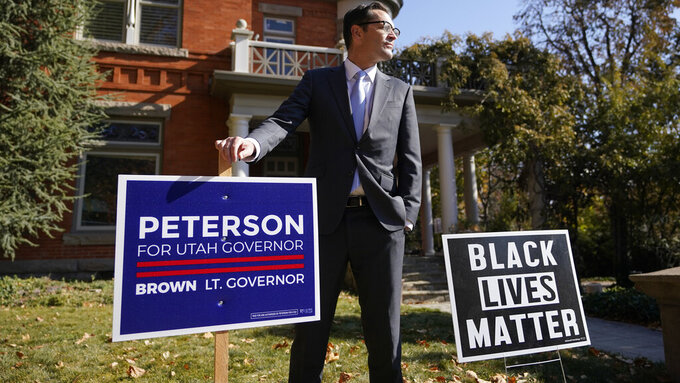 Inslee is the first incumbent elected to a third term in the state in more than 40 years.

Culp, police chief of the small town of Republic, campaigned in part against Inslee’s coronavirus restrictions like mandatory masks, saying they infringe on people’s constitutional rights.

Governors in Washington state aren’t subject to term limits, though most haven’t served more than two terms. The last three-term governor in Washington was Republican Gov. Dan Evans, who served from 1965 until 1977.

Inslee briefly ran for his party’s Democratic presidential nomination last year and has been a frequent and high-profile critic of President Donald Trump.

JEFFERSON CITY, Mo. — Republican Mike Parson has won the Missouri governor’s race, defeating Democratic state Auditor Nicole Galloway for the chance to serve a full term in the role he inherited when his predecessor resigned under a cloud of scandal two years ago.

Parson, a former state representative and sheriff, campaigned on law-and-order issues heading into Tuesday’s election and fought off criticism from Galloway over his laissez faire approach to the coronavirus pandemic.

Parson is a conservative who has favored what he calls a “balanced approach” to the pandemic by allowing businesses and schools to operate while imploring Missourians to act responsibly to slow the spread of the virus. But Missouri is among several Midwestern states that have seen big increases in confirmed cases and hospitalizations, which Galloway has blamed on a “failure of leadership.”

Parson was elected lieutenant governor in 2016 and ascended to the top job two years later when Republican Gov. Eric Greitens resigned amid a scandal.

The mild-mannered governor who has often been reluctant to criticize President Donald Trump has been generally praised for his handling of the coronavirus pandemic, though some complained he was slow to reopen K-12 public schools and certain parts of the economy.

Forest often criticized the shuttering of small businesses, including bars, bowling alleys and gyms. He announced in August that he would not continue to pursue an unsuccessful lawsuit he filed challenging Cooper’s executive authority to keep certain businesses closed during the pandemic.

Cooper’s win in Tuesday’s election is a positive sign for other Democrats on North Carolina’s ballot.

SALT LAKE CITY — Republican Lt. Gov. Spencer Cox has won the race for Utah governor, replacing the leader who endorsed him in a race that played out during the coronavirus pandemic.

Cox defeated Democrat Chris Peterson, a law professor who continued to advocate for a mask mandate as cases spiked this fall. Cox supported Republican Gov. Gary Herbert’s decision to encourage them but not require their use.

The general election came after a hard-fought GOP primary where Cox beat out three other competitors for the nomination that’s often decisive in conservative Utah.

One of those was former U.S. Ambassador Jon Huntsman, Jr., who had previously served as governor and is a well-known political name. He caught the virus during the race and later recovered.

Cox will succeed Herbert, who first took office in 2009 and decided not to run again this year.

BISMARCK, N.D. — Republican Gov. Doug Burgum has won a second term after a campaign that focused largely on his management of the coronavirus pandemic.

Burgum benefited from an electorate that is strongly conservative, winning despite a state economy that’s been weakened by the coronavirus epidemic and where the spread of COVID-19 cases has been among the worst in the nation since late summer.

Lenz had contended that Burgum didn't do enough to slow the spread of the coronavirus, including mandating face coverings.

Democrats have not won the governor’s office in North Dakota since 1988. The party holds no statewide or congressional offices.

MONTPELIER, Vt. — Vermont’s incumbent Republican Gov. Phil Scott has won reelection to the office he has held since first being elected in 2016.

Scott did not do any in-person campaigning ahead of the election, relying on a number of debates with Zuckerman and email and direct mail messages to the people of Vermont.

While Scott is a Republican in a heavily Democratic state, he is seen as popular with the public and has been given high marks for his handling of the COVID-19 pandemic.

Zuckerman, a 48-year-old farmer from Hinesburg, campaigned on promises to do more for to advance progressive causes such as saying wealthy people should pay more in taxes and Vermont should do more to combat climate change.

Sununu has enjoyed widespread support for his handling of the coronavirus pandemic and overcame his opponent’s efforts to tie him to President Donald Trump.

While Democrats held majorities at the Statehouse during Sununu’s second term, he made lavish use of his veto pen, often blocking bills sponsored by his opponent. He twice vetoed Feltes’ paid family and medical leave proposals, which he called an income tax.

Feltes denied that characterization, and argued that unlike Sununu, he was running to help working families, not out of a sense of entitlement. Sununu’s father served as governor in the 1980s, and his brother served in Congress.

Libertarian Darryl Perry also was on the ballot.

The race was seen partly as a referendum on Carney’s handling of the coronavirus pandemic. His closures and restrictions on businesses led to thousands of Delawareans losing their jobs and filing unemployment claims in record-shattering numbers.

Murray sued Carney herself over a ban on short-term rentals he imposed early in the virus outbreak. The lawsuit remains pending in federal court.

Carney has defended his actions and said he will continue to work to protect Delawareans from COVID-19.

He fended off a Democratic challenger by positioning himself as an ally of President Donald Trump with the experience to create jobs.

Justice beat Democrat Ben Salango, a Kanawha county commissioner. Salango tried to overcome his lack of name recognition with a campaign aimed at painting the billionaire governor as more interested in running his business empire than fixing the state’s roads and economy.

Justice will serve a second and final term under the state’s term limits.

INDIANAPOLIS — Republican Eric Holcomb has won reelection as Indiana governor, fending off challengers who criticized his handling of the coronavirus pandemic.

Holcomb went into his campaign for a second term with a huge fundraising advantage and didn’t face any well-known challengers. Holcomb sidestepped any criticism of President Donald Trump even as Holcomb promoted face mask use and issued a statewide mask mandate in July.