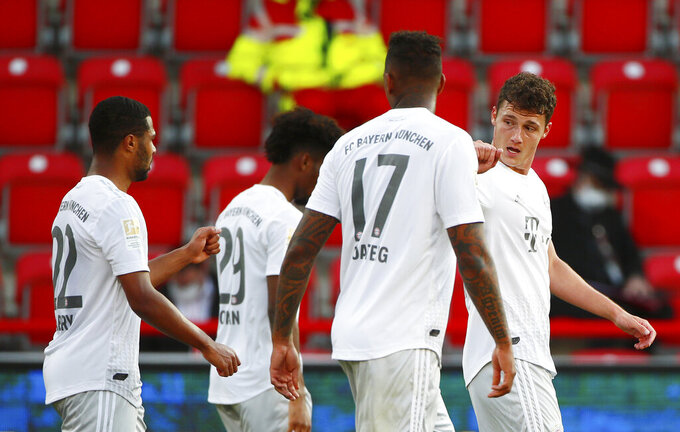 Benjamin Pavard of Munich, right, celebrates his side's second goal during the German Bundesliga soccer match between Union Berlin and Bayern Munich in Berlin, Germany, Sunday, May 17, 2020. The German Bundesliga becomes the world's first major soccer league to resume after a two-month suspension because of the coronavirus pandemic. (AP Photo/Hannibal Hanschke, Pool)

Bayern Munich has beaten Union Berlin 2-0 in its first game for more than two months as the German soccer league’s restart continues.

Robert Lewandowski scored from a penalty and Benjamin Pavard with a header as Bayern remained unbeaten in 2020.

It was Lewandowski’s 40th goal of the season in all competitions. That’s the fifth straight season he’s hit that mark.

The Bundesliga resumed Saturday after more than two months without any games because of the coronavirus pandemic. All games are being played without fans.

German soccer champion Bayern Munich has returned to action for the first time in more than two months with a league game at Union Berlin.

Bayern last played on March 8 before the Bundesliga was suspended because of the coronavirus pandemic.

Bayern starts with Robert Lewandowski up front after the Poland forward recovered from a shin injury during the time the league was suspended.

France international Kingsley Coman is also on the bench with the winger not having played since injuring his leg against Chelsea on Feb. 25.

Bayern can go four points clear of second-place Borussia Dortmund with a win as it chases an eighth successive German title.

Russia has relaxed border restrictions for athletes and coaches in a move that will help soccer to restart in the country next month.

Since March Russia has barred most foreign arrivals in a bid to stem the spread of the coronavirus. Now the government says athletes and coaches will be allowed in if they have a contract with a Russian sports team or organization. They will have to spend 14 days in isolation on arrival and will be observed by doctors.

The government says “the decision will help professional sports organizations, including Russian Premier League soccer clubs, to resume training after the lifting of restrictions related to the spread of the new coronavirus.”

The Russian Premier League aims to restart June 21 though some of its foreign stars headed home during the outbreak and have yet to return.

Lokomotiv Moscow said Saturday that its 35-year-old Peruvian winger Jefferson Farfan had contracted the virus. Club chairman Anatoly Meshcheryakov told the RIA Novosti news agency that Farfan was in Moscow and had not been hospitalized. Farfan hasn’t played this season due to injury.

Tottenham goalkeeper Hugo Lloris is in favor playing without fans for a long time if it helps “save" soccer clubs amid financial uncertainty.

The English Premier League hopes to re-start games by mid-June in empty stadiums amid the coronavirus pandemic.

He adds that “if we have to play behind closed doors for a long period of time in order to save soccer, then we have to.”

Lloris currently trains at his club every other day with “specific time slots” for each player, adding that “sometimes we pass each other, but from very far away.”

In a newspaper interview with Nice-Matin, Lloris says that arriving at training already dressed in his kit reminds him“of when I started out and my grand-parents would drop me off at training.”