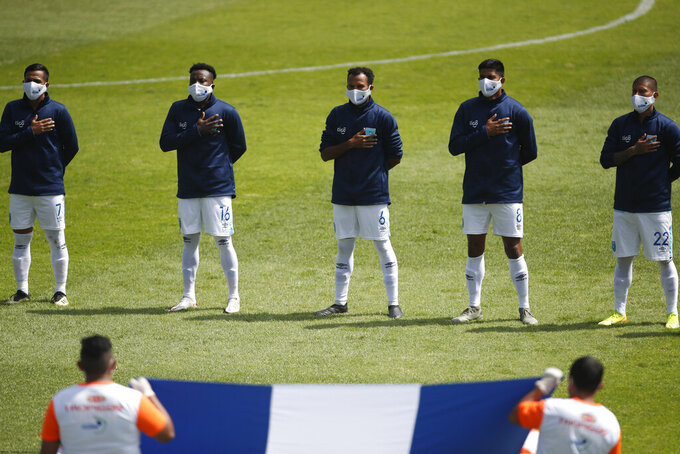 Lou Holtz has tested positive for the coronavirus.

“I don’t have a lot of energy right now,” Holtz told the ABC station.

Holtz led Notre Dame to the 1988 national title in a Hall of Fame career. He has worked for ESPN and campaigned for President Donald Trump. Holtz is set to receiver the Presidential Medal of Freedom from Trump.

The San Francisco 49ers have placed two more players on the COVID-19 list.

Offensive lineman Hroniss Grasu and linebacker Joe Walker were added to the list Thursday. The team has placed four players on the list this week.

The list is used for players who either test positive for COVID-19 or have been in close contact with someone who has been infected.

The Niners have a bye this week.

DePaul men’s basketball is pausing all team activities following positive COVID-19 test results, and the first three games of the season are being canceled.

The test results were in the team's Tier 1 group, which includes athletes, athletic trainers, physical therapists, medical staff, equipment staff and officials. For reasons of medical privacy, the school will not identify anybody who tests positive.

Coach Dave Leitao said the team will return to practice and competition after completing all mandated protocols and procedures.

DePaul and Big East foes Seton Hall, Marquette, and UConn have been forced to pause activities because of positive COVID-19 test results.

The cancellations include games scheduled for Nov. 25, Nov. 28 and Dec. 1.

UAlbany men's basketball has canceled its season-opener at home against Marist, and the Great Danes won't participate in the Basketball Hall of Fame Tip-Off Tournament at Mohegan Sun in December.

The Great Danes have not practiced since Nov. 2, after a pooled test returned a presumptive positive within the team. A surge in cases within the university community initiated the protocols for a full pause in line with state guidelines. That began Nov. 10.

The season opener was originally scheduled for Nov. 28 and the Great Danes were scheduled to play Drexel and Quinnipiac in the tournament.

The game, originally scheduled for Nov. 14, was postponed due to problems in both programs with positive COVID-19 tests and contact tracing. The game was rescheduled for Dec. 12 before being pushed back two days.

The Sea Dogs are the fifth team in the league to announce a positive test. The league says the team's next five games will be postponed.

The Cape Breton Eagles, who faced the Sea Dogs on Wednesday night, will not play again until public health officials conclude an investigation.

The QMJHL league is the only Canadian major junior league to start play this season. The Ontario Hockey League and Western Hockey League have said they plan to begin their seasons in the new year.

A jockey based at Woodbine Racetrack on the outskirts of Toronto has tested positive for COVID-19.

Woodbine Entertainment made the announcement Thursday but didn’t identify the jockey.

The track's COVID-19 prevention protocols do not allow access to Woodbine for at least 14 days while self-quarantining. The jockey will be required to provide proof of a negative COVID-19 test before being allowed to resume racing.

The organization said contact tracing has been performed and individuals who were in close contact with the jockey are being notified. Those individuals, including at least one other rider, will be required to provide a negative COVID-19 test prior to being permitted to enter the facility.

Woodbine Entertainment said the case of COVID-19 was contracted outside the racetrack. The organization added that the jockey room and other common areas received thorough electrostatic disinfection Saturday, which is the last day the facility hosted live racing.

The German hockey league will resume play next month for the first time since March.

The 2020-21 season will begin on Dec. 17 with the 14 clubs split into a pair of seven-team regional groups and playing fewer games than normal. The playoffs will be best-of-three games rather than best-of-seven.

The start of the new season was delayed twice as clubs faced an uncertain financial future while playing in empty arenas. The league says clubs have received assurances of financial help from German politicians.

The league suspended play last season on March 10 and no champion was named.

German soccer club Hoffenheim says it tried to move its match against Stuttgart from Saturday to Sunday because of coronavirus cases but its request was refused.

Seven Hoffenheim players have tested positive for the virus in the last two weeks. The club hoped that the delay would allow more players to end their quarantine periods or regain fitness in training.

Hoffenheim sports director Alexander Rosen says the league rejected the application and “we accept the decision but we regret it.”

Hoffenheim is in 13th place in the Bundesliga and Stuttgart is in eighth.