The Latest: Madison Keys wins just before midnight in Paris 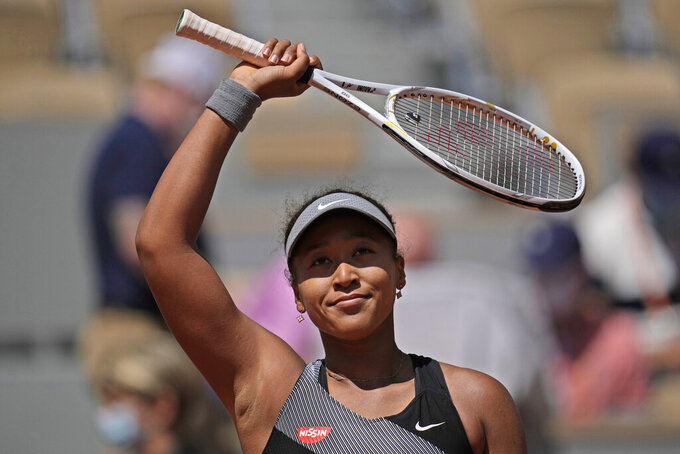 Japan's Naomi Osaka celebrates after defeating Romania's Patricia Maria Tig during their first round match of the French open tennis tournament at the Roland Garros stadium Sunday, May 30, 2021 in Paris. (AP Photo/Christophe Ena)

American Madison Keys worked nearly until midnight to close out Day 1 of the 2021 French Open under the artificial lights — and without a fan in sight.

Spectators were ushered out of Roland Garros to meet a 9 p.m. curfew in Paris because of coronavirus concerns and the 23rd-seeded Keys' 6-3, 3-6, 6-1 victory over Oceane Dodin did not start until after 10 p.m.

Keys, who missed the Australian Open in February after testing positive for COVID-19, took control right away in the third set Sunday night, hitting an ace to hold in the first game, then breaking at love en route to a 5-0 lead.

The 2017 U.S. Open runner-up and 2018 French Open semifinalist will face 18-year-old Leylah Fernandez of Canada in the second round.

Two American men in their 20s advanced earlier Sunday. Marcos Giron reached the second round when 16th-seeded Grigor Dimitrov stopped playing in the fourth set because of a back issue, while qualifier Mackenzie McDonald defeated Emil Ruusuvuori of Finland 4-6, 6-3, 7-6 (4), 6-3.

Kei Nishikori acknowledges he needs to “figure out” how to avoid going five sets in Grand Slam matches.

“I have to figure it out, how to win in three sets,” Nishikori said. “It’s really hard to win like this.”

It marked the first time in eight appearances at the clay-court Grand Slam that Thiem lost his opening match.

Andujar also defeated Roger Federer in Geneva earlier this month. It's the first time in his career that Andujar has come back to win after losing the opening two sets.

Thiem dropped to 11-9 in five-set matches.

Naomi Osaka was fined $15,000 by the French Open tournament referee for skipping the post-match news conference after her first-round victory — and threatened with stiffer penalties if she continues to avoid her media obligations.

The penalty was announced in a joint statement from the president of the French tennis federation, Gilles Moretton, and the heads of the other three Grand Slam tournaments.

The statement also said that Osaka has been “advised” that “should she continue to ignore her media obligations during the tournament, she would be exposing herself to possible further Code of Conduct infringement consequences.”

Citing the rule book, the statement notes that “tougher sanctions” from “repeat violations” could include default from the tournament and “the trigger of a major offense investigation that could lead to more substantial fines and future Grand Slam suspensions.”

Osaka announced Wednesday in a Twitter post that she would not be taking part in news conferences during the French Open.

Two-time Wimbledon champion Petra Kvitova saved a match point before rallying to beat Belgian qualifier Greet Minnen 6-7 (3), 7-6 (5), 6-1 in the first round at the French Open.

Kvitova, who reached the semifinals at Roland Garros in 2012 and last year, next faces either Elena Vesnina or Belarussian qualifier Olga Govortsova.

The 11th-seeded Kvitova has reached two quarterfinals on clay this year -- in Stuttgart, Germany, and Madrid.

Kvitova commanded with 43 winners to Minnen’s 17. She saved a match point at 5-6 in the second.

Coco Gauff and Venus Williams are teaming up in doubles at the French Open.

The women's doubles draw was announced in Paris on Sunday and Gauff, 17, and Williams, 40, are a surprise entry.

Gauff has beaten Williams twice in Grand Slam singles action — at Wimbledon in 2019 and at the Australian Open last year.

Williams is a seven-time major singles champion and owns another 14 Slam doubles titles that she won with her younger sister, Serena.

Gauff and Williams will face 13th-seeded Ellen Perez and Zheng Saisai in the first round.

The No. 1-seeded team is Hsieh Su-Wei and Elise Mertens.

Naomi Osaka overcame a slew of mistakes to win in her return to the French Open and then did something no one knew whether she would: She spoke briefly to the crowd.

The No. 2-ranked Osaka has said she won't participate in news conferences at Roland Garros — and she did not do a pre-tournament session with the media.

After beating Patricia Maria Tig 6-4, 7-6 (4) despite 35 unforced errors at Court Philippe Chatrier, Osaka spoke into a microphone and briefly exchanged pleasantries with Fabrice Santoro, a former pro tennis player who conducts post-match interviews at the French Open so fans can hear something from the athletes.

Osaka has won four Grand Slam titles, all on hard courts, including the Australian Open this February.

She has never been past the third round at Roland Garros and skipped the clay-court major last year shortly after winning the U.S. Open.

As for her game on clay, she told the sparse crowd at the tournament's first match in its main stadium this year: “I would say it’s a work in progress. Hopefully the more I play, the better I get.”

Three-time Grand Slam champion and former No. 1 Angelique Kerber already is gone from the French Open with a third consecutive first-round loss.

The 26th-seeded Kerber was beaten 6-2, 6-4 to Anhelina Kalinina, a qualifier from Ukraine ranked 139th making her tournament debut.

Roland Garros is the only Grand Slam title that Kerber hasn’t won, and she’s frequently struggled on its red clay.

Her defeat on Court 14 on the opening Sunday was the eighth time in 14 appearances in Paris that she has exited in the first round.

Kerber's best results in Paris were reaching the quarterfinals in 2012 and 2018.

Back in its usual May-June slot, the French Open is getting underway with Australian Open champion Naomi Osaka opening play on the Court Philippe Chatrier.

Just seven months after he won his 13th title at Roland Garros, Rafael Nadal is again the favorite to take a 14th French Open crown that would give him 21 major titles, one more than Roger Federer.

Last year’s tournament was held exceptionally in autumn in Paris because of the coronavirus pandemic.

Neither Nadal nor the 2020 women’s champion, Iga Swiatek, are playing on the opening Sunday.