The Latest: Michigan governor: State's surge may be ending 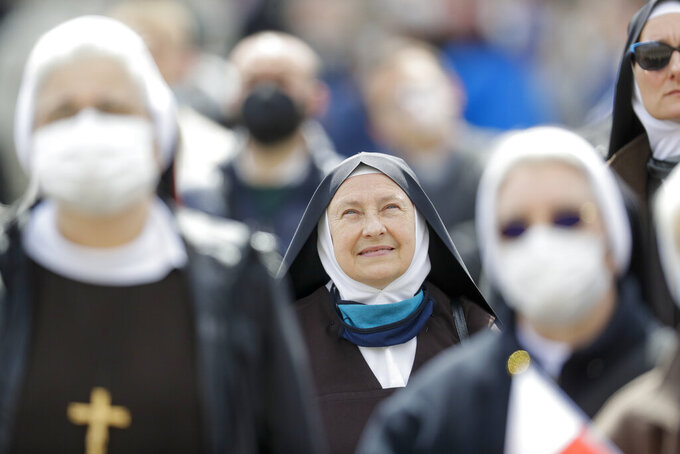 Nuns watch Pope Francis as he recites the Regina Caeli noon prayer from the window of his studio overlooking St.Peter's Square, at the Vatican, Sunday, April 18, 2021. Pope Francis said he is happy to be back greeting the faithful in St. Peter’s Square faithful for his traditional Sunday noon blessing after weeks of lockdown measures. (AP Photo/Andrew Medichini)

LANSING, Mich. — Michigan Gov. Gretchen Whitmer says her state could be seeing a drop in infections after leading the nation’s COVID-19 daily case rate for weeks.

Whitmer has extended a pandemic order that limits business capacity and requires masks in public, but the Democrat has avoided further restrictions in place during previous surges, including suspending indoor restaurant dining.

She told NBC’s “Meet the Press” on Sunday that cases could be beginning to slow down. She didn’t discuss specific data and Michigan doesn’t release coronavirus-related data on Sundays. Health officials said Friday that the seven-day average positivity rate had dropped in recent days to 17.1%, but remained above a December peak of 14.4%.gov

Whitmer has urged a voluntary pause on activities like dining out and pushed for more vaccinations from the White House, which has said it would help with other logistics but continue allocating based on population.

— CDC says half of U.S. adults have received at least one COVID-19 shot

— AP PHOTOS: As global toll tops 3 million, 15 photographers each reflect on a single shot of the pandemic

WASHINGTON — Advisers to the Centers for Disease Control and Prevention plan to meet this coming Friday to discuss the pause in Johnson & Johnson’s COVID-19 vaccine, and the top U.S. infectious disease expert says he’d be “very surprised if we don’t have a resumption in some form by Friday.”

Dr. Anthony Fauci said Sunday that “a decision almost certainly will be made by Friday. I don’t really anticipate that they’re going to want it stretch it out a bit longer.”

Fauci tells CBS’ “Face the Nation” that one possibility would be to bring the one-and-done shots back “with some form of restrictions or some form of warning. …I believe by Friday we’re going to know the answer to that.’

The Johnson & Johnson vaccine is in limbo in the U.S. after federal health advisers said last week they needed more evidence to decide if a handful of unusual blood clots were linked to the shot — and if so, how big the risk is.

The reports are rare — six cases out of more than 7 million inoculations with the J&J vaccine in the United States. The clots were found in six women between the ages of 18 and 48. One person died.

Fauci told NBC’s ``Meet the Press” that “I doubt very seriously if they just cancel it. I don’t think that’s going to happen.”

ISTANBUL - Turkey recorded 318 deaths due to COVID-19 on Sunday, the Health Ministry said, the highest daily count since the start of the pandemic.

The figure for the previous 24 hours took the country’s total death toll to 35,926. There were 55,802 new daily infections, pushing the overall figure to nearly 4.27 million, the ministry added.

Weekly data also released Sunday showed the northwest province of Canakkale had the highest rate of cases in the country, with 962.98 infections per 100,000 people.

Turkey has seen rising numbers of COVID-19 cases and deaths since restrictions were eased at the start of March, when daily cases were below 10,000. The government has blamed the rising numbers on coronavirus mutations.

A partial closure was re-introduced on April 13, with tighter controls such as an extended evening weekday curfew, a return to online education and a ban on unnecessary intercity travel.

A vaccination program was launched in mid-January and Erdogan said Saturday that 20 million doses had been administered in the country of nearly 84 million.

VATICAN CITY — Pope Francis says he is happy to be back greeting the faithful in St. Peter’s Square for his traditional Sunday noon blessing after weeks of lockdown measures.

Italy later this month will start gradually lifting some anti-pandemic restrictions, allowing, for example, outdoor dining at cafes and restaurants in areas of the country where the COVID-19 outbreak has been showing signs of improvement.

A couple of hundred people, including nuns and families, standing a safe distance apart in the vast square, turned out to see the pope speak from a window of the Apostolic Palace. “Thank God, we can gather in this square again,” Francis said. “I have to say, I miss the square.”

The past weeks have seen Francis standing at a lectern inside the palace to deliver his Sunday noon remarks via TV, radio and internet.

“Thank God and thank you for your presence,” Francis told those who showed up despite clouds threatening a downpour in Rome.

JERUSALEM — Israel has lifted a public mask mandate and fully reopened its education system in the latest easing of coronavirus restrictions following its mass vaccination drive.

All primary and secondary school grades returned to classrooms on Sunday, and health officials ended a year-long requirement to wear a mask in public spaces. Masks are still required indoors and in large gatherings.

Israel has speedily inoculated a majority of its population against the coronavirus in a world-leading vaccination campaign. It has lifted most of its coronavirus restrictions and announced last week that it would be reopening the country to vaccinated foreign tourists starting in May.

Since the start of the pandemic last year, Israel has recorded over 836,000 cases of the coronavirus and at least 6,331 deaths, according to the Health Ministry. Over 53% of its 9.3 million citizens has received two shots of the Pfizer/BioNTech vaccine.

In the months since Israel launched its vaccination campaign in December, serious cases and deaths have fallen precipitously and allowed the economy to fully reopen.

The vaccination campaign in the Israeli-occupied West Bank and Gaza has been slow to get off the ground, with Israel facing criticism for not sharing more of its supplies.

ISLAMABAD — Pakistan has reported its highest single-day death toll from COVID-19, bringing the country’s total deaths in the pandemic to nearly 162,430.

Federal authorities on Sunday said 149 new deaths were recorded in 24 hours confirmed. They also confirmed over 6,000 new coronavirus cases since the day before, bringing Pakistan's total confirmed cases to more than 756,285.

Authorities in Pakistan decided Saturday to start vaccinating people aged 50 to 59 next week.

Pakistan has largely relied on donated or imported Chinese vaccines, which had been offered only to health workers and elderly people. But those groups have not responded in overwhelming numbers to the vaccination campaign, prompting officials to offer the vaccines to a younger cohort.

Pakistan, with a population of 220 million, hopes to receive 15 million COVID-19 vaccine doses through the U.N.-backed COVAX program by next month.

After a slow-speed chase, officers surrounded his truck with their squad cars, but he refused to get out. Officer Steven Sickmann got up on the truck’s running board and reached through the window. The complaint says Oeltjenbruns closed the window on the officer’s arm, trapping him, and drove off, crashing into squad cars.

The state’s Department of Public Health said Sunday that the seven-day average of daily shots is just over 125,000. The news comes as the state on Sunday added 2,666 new confirmed and probable cases of coronavirus disease and logged 10 additional deaths.

Illinois has reported 21,663 deaths from COVID-19 with more than 1.3 million infections overall. On Friday, Chicago officials announced plans to open a vaccination program at a hospital where vaccine shipments were paused after reports the hospital acted with favoritism in dispensing the treatment.