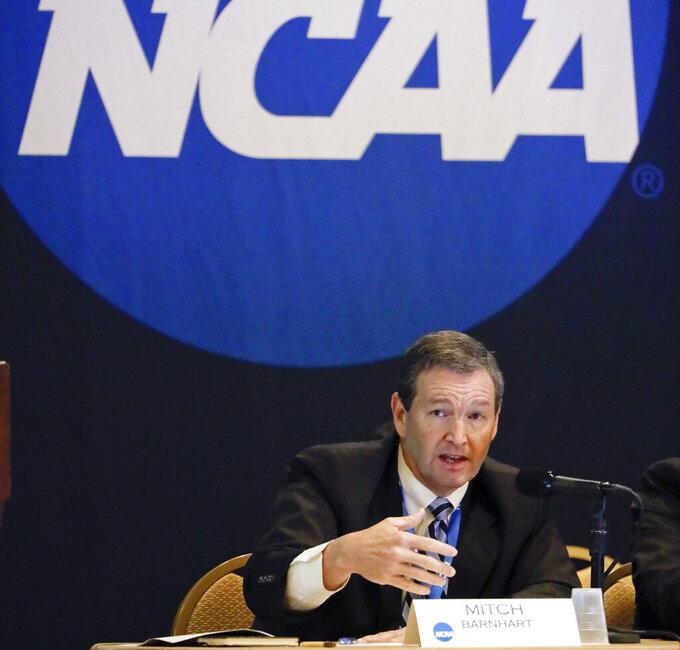 FILE - In this Jan. 19, 2017, file photo, Mitch Barnhart, athletic director at Kentucky, takes part in a panel discussion at the NCAA Convention in Nashville, Tenn. There is no need to worry about geography in this year's NCAA Tournament. Get ready for plenty of talk about the so-called “S curve” instead. And do not worry — it's not that complicated. (AP Photo/Mark Humphrey, File)

Michigan is set to play two rescheduled basketball games that could be crucial in determining who wins the Big Ten. The No. 3 Wolverines also moved another big game to accommodate the changes.

The league-leading Wolverines (15-1, 10-1) missed five games because the athletic department paused activities for coronavirus-related reasons. Two of those have now been rescheduled: Michigan is set to host Illinois (15-5, 11-3) on March 2 and rival Michigan State (10-9, 4-9) on March 4.

Michigan’s home game against Iowa (16-6, 10-5) is now set for this coming Thursday after being originally scheduled for March 4.

The NHL is down to 11 players on its COVID-19 list, the lowest number since the season began Jan. 13.

No new players were added, while Colorado Avalanche defenseman Samuel Girard and goalie Hunter Miska were removed from the list on Friday.

The previous low of players listed was 12 on Jan. 17. The number of players affected continued to drop since an NHL-high 59 were listed on Feb. 12.

The Philadelphia Flyers have a league-high six players still affected, including captain Claude Giroux, who has been on the list for 11 consecutive days.

The men’s basketball game between Texas A&M and Arkansas on Saturday was postponed because of an array of coronavirus issues. The Aggies will remain on pause until further notice.

The Aggies said Friday they were prepared to play the home game with a limited roster, but a new positive COVID-19 test along with subsequent contact tracing forced the postponement.

Arkansas coach Eric Musselman said his team found out about the postponement while boarding the bus to travel to College Station. He said his players were “devastated.”

A makeup date has not been set. Musselman says his team is working with the Southeastern Conference to see if it can add a nonconference game.

A limited number of fans will be allowed to attend all rounds of next month’s NCAA men’s basketball tournament in Indiana.

The governing body said Friday venue capacity will be capped at 25% to allow for social distancing. That figure will include all participants, essential staff and family of team members. All must be masked.

The NCAA says the decision came in conjunction with state and local health officials to follow COVID-19 safety protocols.

The NCAA earlier announced the entire tournament will be played in Indiana because of the pandemic. The Final Four already had been set for Indianapolis. The semifinals are April 3 and the national championship game two days later.