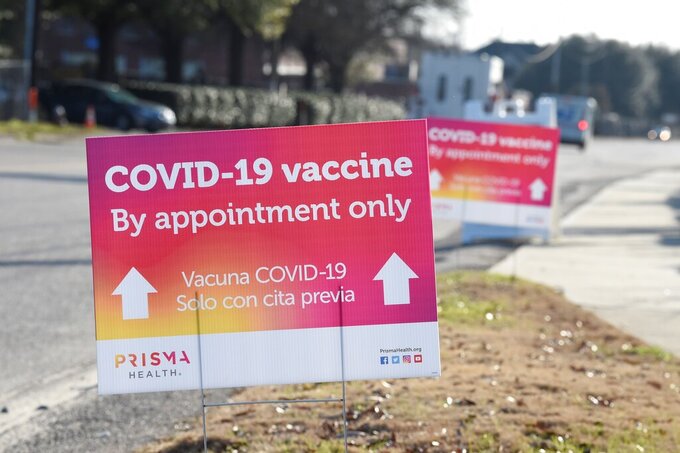 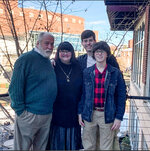 MINNEAPOLIS — Minnesota health officials urged this week that people wear masks — and wear them properly — as the state reported an additional 964 new infections on Saturday.

More than 6,300 people have died in Minnesota and more than 470,000 people have had confirmed coronavirus cases since the start of the pandemic.

State figures show more than 209,010 people have received the full two-dose series of the vaccine. However, health officials point out people need to wear masks correctly. Researchers at the University of Minnesota reviewed video of public events and found nearly a quarter of people were wearing masks under their noses.

OKLAHOMA CITY — Oklahoma is approaching 4,000 deaths caused by the coronavirus.

Data from Johns Hopkins University shows a decline in the seven-day rolling averages of cases and deaths. The new cases went from 2,603 per day to 1,584. The deaths declined from 40 daily to 35.

Oklahoma ranks third in the nation in the number of new cases per capita at 674 per 100,000 residents, according Johns Hopkins.

BEIRUT — Lebanon has received its first batch of coronavirus vaccines.

The 28,500 Pfizer doses arrived Saturday, ahead of a nationwide vaccination campaign in the tiny Mediterranean country. The health ministry says 57 vaccination centers are to be set up nationwide within two weeks. Lebanon has seen a sharp rise in cases and deaths in recent weeks.

Lebanon has imposed a nationwide lockdown, including a curfew, since Jan. 11. The nation of 6 million has registered 337,000 virus cases and 3,961 confirmed deaths since February last year.

More Pfizer doses are scheduled to arrive in the coming weeks. AstraZeneca shots will be brought in at a later stage, according to Abdul-Rahman Bizri, head of the national committee on COVID-19 vaccines.

So far, some 450,000 people have registered for the vaccines.

Mayor LaToya Cantrell has ordered bars closed during the Mardi Gras weekend that started Friday and runs through Tuesday. The lavish parades are canceled and there are limits on gatherings.

Mardi Gras, or Fat Tuesday, is the annual pre-Lenten bash celebrated along much of the Gulf Coast — with the biggest celebration in heavily Catholic New Orleans. Last year’s revelry is considered to have contributed to an early surge that made Louisiana a coronavirus hot spot.

Some locals are making the best of it, decking their houses like parade floats. A giant carton of popcorn, huge lollipops and a Paul Bunyan-sized ice cream cone are among the decorations on one two-story house aptly titled “Snacking in Place.” Motorists can drive by an array of idled floats at New Orleans’ City Park.

COLUMBIA, S.C. — The South Carolina state Senate has passed a proposal to open vaccinations to tens of thousands of teachers.

The state Senate unanimously voted this week to allow teachers, regardless of age, to begin scheduling vaccinations. The measure also requires districts to offer in-person classes five days a week after spring break — even if teachers aren’t fully vaccinated. Gov. Henry McMaster wants in-person classes to resume but favors prioritizing vaccines for those 65 and older. The House also must approve the measure before it goes to the governor’s desk.

It took weeks for Elizabeth Cline to schedule COVID-19 vaccination appointments for her 70-year-old parents, eventually getting slots through a hospital system near her home in Greenville, South Carolina. Now they’re awaiting second doses.

“I wish more thought had been put into that at the beginning, and it didn’t come down to teachers begging to be heard,” Cline told The Associated Press. “I think teachers deserve more prioritization than they’re getting.”

South Carolina has registered more than 7,000 confirmed deaths since the start of the pandemic.

The numbers reported by the Department of Health Services increased the state’s totals to 795,323 confirmed cases and 14,948 confirmed deaths, the 12th highest death toll in the U.S.

There were 2,300 hospitalized COVID-19 patients occupying inpatient beds Friday, down from the pandemic high of 5,082 on Jan. 11. Seven-day rolling averages of daily new cases and daily deaths have dropped in the past two weeks.

Also, the number of inmates in Arizona’s prisons has declined 11% since the start of pandemic.

The decrease reflects a slowdown in the state’s court system with fewer criminal jury trials in the last year as it took steps to prevent the coronavirus from spreading at courthouses.

At least 300 non-violent inmates have been released from country jails in Arizona in the last year in a bid to lower virus risks. However, the state has refused calls for early release of prisoners as a prevention measure.

The grants will help expedite a vaccination process that has been slower than anticipated in Hawaii. The state has experienced vaccine shortages and thousands of people who have received their first shot are overdue for their second. About 153,000 people in the state have been vaccinated.

OKLAHOMA CITY — The Biden administration’s plan to open 100 vaccination sites by the end of the month was initially embraced by governors and health officials, who considered it a needed lifeline to get more Americans inoculated against the coronavirus.

But reality has quickly set in: Some are hesitating to take the offer, at least for now, saying they don’t need more places to administer doses. They just need more doses.

The plan involves mobilizing thousands of staffers and contractors from the Federal Emergency Management Agency, the Department of Defense and other federal agencies. They already have been providing money, staffing or logistical support for many state and local vaccination efforts.

So far, just over 46 million doses have been administered, and the administration’s goal is to ramp up daily doses to 1.5 million.

Jeff Zients, the White House COVID-19 coordinator, told governors on a conference call this week that the administration will get more vaccines to the states. By next week, states will be sent a total of 11 million doses, an increase of 500,000 compared with this week.

More than 480,000 Americans have died from the coronavirus. Some 27 million have been infected.

OMAHA, Neb. — Hundreds of meatpacking workers have been vaccinated against the coronavirus.

However, the union that represents many of them says several hundred thousand more have not, despite the risks they continue to face.

The United Food and Commercial Workers International union is lobbying for workers to be moved up vaccination priority lists, and major meat companies have launched campaigns to educate employees and dispel rumors about the vaccines.

But in most states, meatpacking workers are still waiting for their turn to be vaccinated and are ranked behind health care workers, residents of long-term care centers and people age 65 and older.

Last spring, over 1,000 Smithfield workers in Sioux Falls, South Dakota, were sickened and four died. Other meatpacking plants also dealt with major outbreaks. In April, the industry’s meat production fell to about 60% of normal levels.

Governors are under pressure from mayors, some of whose vaccine stocks have already been depleted. Brazil’s two biggest cities, Rio de Janeiro and Sao Paulo, are expected to be without shots in a matter of days.

Bolsonaro reversed course in January, facing delay in the delivery of the only vaccine his administration purchased and watching as other nations began immunizing their citizens while Brazil’s 210 million people were on hold.

Doria told The Associated Press in an interview, “If it weren’t for this (CoronaVac) shot, Brazil today would be a country without vaccines.”

He says he’s negotiating for 20 million more doses, and if the federal government doesn’t buy them, he could sell them to other governors: “It is not for a state government to secure vaccines, but here we are.”

The variant dominant in Britain is now responsible for a large majority of recent virus cases around the French port city of Dunkirk, according to a statement Saturday from the regional health agency.

The regional administration ordered tougher mask rules and urged people in Dunkirk and some other areas not to leave town to limit the spread. The city’s saturated hospitals are sending virus patients to other regions amid a spike in the number of people needing intensive care.

Figures released Friday by France’s largest network of private medical labs, Biogroup, indicate the variant has spread significantly. The group says the variant showed up in about half of its tests in the western Paris region Feb. 1-7.

BEIJING — Railway journeys in China during the usually busy Lunar New Year holiday travel rush are down by almost 70% amid calls for people to stay where they are to avoid a new outbreak of the coronavirus.

Air and bus travel are also down considerably, but one figure is up: China’s box office receipts smashed the previous one-day record on the first day of the new lunar Year of the Ox, bringing in more than $269 million.

Earlier this month, Iran received 20,000 doses of the Russian vaccine in its first batch as the country struggles to fight the worst outbreak of the pandemic in the Middle East.

Reports have said Iran has purchased a total of 2 million doses of the vaccine. Iran has a population of more than 83 million.

Iran in December began human trials for a first vaccine manufactured in Iran, which is expected to be distributed in the spring. The country is also working on a joint vaccine with Cuba.

Iran plans also to import some 17 million doses of vaccine from the international COVAX program and millions more from individual countries.

Pennsylvania is among the lowest-ranked states in how efficiently it is vaccinating its population.

The state also plans to dramatically cut the number of providers administering the vaccine from 780 to between 200 and 300 providers. The health department says it will allow more doses to go to providers that have proven adept at swiftly using their weekly allotments.

Acting Health Secretary Alison Beam says the moves are intended to hold hospitals, pharmacies and other providers accountable for the vaccine doses.

LONDON — The University of Oxford plans to test its AstraZeneca COVID-19 vaccine in children for the first time, becoming the latest vaccine developer to assess whether its coronavirus shot is effective in young people.

The trial announced Saturday seeks to recruit 300 volunteers between the ages of 6 and 17, with up to 240 receiving the COVID-19 vaccine and the remainder a control meningitis vaccine.

Andrew Pollard, chief researcher on the Oxford vaccine trial, says while most children don’t get severely ill from COVID-19, “it is important to establish the safety and immune response to the vaccine in children and young people as some children may benefit from vaccination.’’

Regulators in more than 50 countries have authorized widespread use of the Oxford vaccine, which is being produced and distributed by AstraZeneca, for use in people over age 18.

Pollard says the Oxford trial should help policymakers decide whether at some point they want to extend mass vaccination programs to children as they seek to ensure schools are safe and combat the spread of the virus in the wider population.

“For most children, for themselves, COVID is really not a big problem,’’ Pollard told The Associated Press. “However, it is certainly possible that wider use to try and curb the progress of the pandemic might be considered in the future, so here we’re just trying to establish the data that would support that if indeed policymakers wanted to go in that direction.”