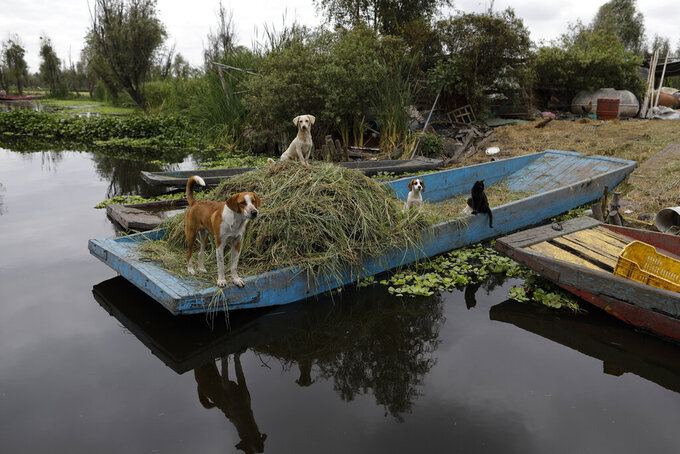 Dogs and a cat watch boats passing by on the canal from a parked boat amid the new coronavirus pandemic, in Xochimilco's chinampera farming zone, in Mexico City, Monday, Sept. 14, 2020. (AP Photo/Rebecca Blackwell)

COLUMBIA, Mo. — With more than 1,300 of its students infected with the coronavirus, the University of Missouri in Columbia has expelled two students and suspended three others for violating rules meant to slow the virus’ spread.

The university said Tuesday that the sanctions were necessary because of flagrant violations of rules and regulations that require students who test positive for the COVID-19 virus to isolate themselves and comply with social distancing requirements. Names of the students were not released.

University System President and MU Chancellor Mun Choi says the discipline was necessary because the students “willfully put others at risk, and that is never acceptable.”

The university’s COVID-19 dashboard cites 1,347 student cases of the virus since classes resumed in August. Of those, 332 cases remain active and 1,015 students have recovered.

Since the semester began, the university says that about 470 students have been referred to the Office of Student Conduct and Accountability for possible violations of COVID-19 policies. Discipline can range from a verbal reprimand to expulsion. Eleven student organizations also are under investigation.

— Speaker Nancy Pelosi says the House will remain in session until lawmakers deliver another round of COVID-19 relief.

— At least seven people in Maine have died in connection to a coronavirus outbreak following a wedding reception this summer that violated state virus guidelines.

— The COVID-19 pandemic has struck out a number of bars and restaurants near Cleveland’s Progressive Field this baseball season.

The Department of Health Services reported 138 intensive care unit beds were in use Monday for COVID-19 patients, below the 155 when the state started reporting hospitalization data on April 8. Use of ventilators also was below levels first reported in April.

He says those measures work in small states along with states such as New York, Texas and California.

Vermont has the lowest rate of positive tests for the coronavirus in the country and the lowest number of cases per capita.

GENEVA — The head of the World Health Organization says school closures due to the coronavirus pandemic should be a “last resort” and only applied in places with high levels of transmission.

Tedros Adhanom Ghebreyesus was joined by the heads of the UNICEF and U.N. cultural and education agency UNESCO to tout the importance of keeping schools open, when possible, and warn the more kids are out of school, the less likely they are to return in many places.

He says “distance learning” should be available where possible.

Tedros says WHO data shows fewer that one in 10 confirmed COVID-19 cases and under 0.2 percent of COVID-19 deaths were recorded in people under age 20. He says more research is needed on the factors that increase the risk of severe cases and death among children and warned the long-term effects remain unknown.

LONDON — Ireland’s entire Cabinet is self-isolating and parliament has been suspended after the health minister reported feeling unwell.

Speaker Sean O Fearghail made the announcement Tuesday, saying the “house stands adjourned, I suspect, until Tuesday next” or until he’s been given directions to restart government proceedings.

Donnelly had taken part in a cabinet meeting and attended a press conference announcing the Irish government’s latest plans to reopen the country’s economic and social life.

Ireland had 357 new coronavirus cases in the last 24 hours, with the majority reported in Dublin.

LOS ANGELES — California fitness centers have filed a lawsuit alleging Gov. Gavin Newsom’s measures aimed at curbing the spread of the coronavirus unfairly target the industry and are demanding they be allowed to reopen.

Scott Street, a lawyer for the California Fitness Alliance, says the suit was filed in Los Angeles County Superior Court. It accuses state and Los Angeles County officials of requiring gyms to close without providing evidence that they contribute to virus outbreaks and at a time when staying healthy is critical to residents.

BEIRUT — Syria’s government has decided to reopen the Damascus International Airport for international flights while taking all precautionary measures against coronavirus.

The airport has been closed since early March but in recent months there have been some flights that brought Syrians who were stuck outside the country back home.

The decision came Tuesday during a Cabinet meeting, according to state news agency SANA.

Syria, which had a population of 23 million before its conflict began in March 2011, has registered 3,540 confirmed coronavirus cases and 155 deaths in government-held areas.

The actual number of cases is believed to be much higher because of low testing.

Coronavirus tests at private clinics cost around $60, too expensive for most Syrians, whose average salary is less than $100 a month. The government conducts about 300 free tests each day for people showing symptoms.

MEXICO CITY — Mexicans will celebrate their Independence Day without a big, public ceremonies for the first time in 153 years Tuesday because of restrictions caused by the coronavirus pandemic.

President Andrés Manuel López Obrador has promised to perform the “grito” and “viva Mexico” but only in front of a select number of invited guests.

Traditionally, the president rings the bell that marked the call to arms during the 1810-1821 struggle to win independence from Spain. The event has not been cancelled since 1847, during the Mexican-American War, when U.S. troops occupied Mexico City.

López Obrador generally has no problem with crowds and dislikes wearing face masks. But with more than 671,000 cases and almost 71,000 deaths -- the fourth highest in the world -- the president apparently thought twice about packing the usual 100,000 rowdy revelers into Mexico City’s main square, known as the Zocalo.

MILAN — Italy’s coronavirus cases increased by 1,229 on Tuesday. Total cases in Italy stand at 289,990, after the government conducted 80,500 more tests in the last day.

There were nine additional deaths, bringing the total confirmed deaths to 35,633.

The number of COVID-19 patients in intensive care topped 200 and another 100 people were being treated in the hospital, for a total of 2,222.

MADRID — Spain’s official death toll for the coronavirus surpassed 30,000. The total cases increased beyond 600,000, becoming the first European country to reach that threshold.

The Health Ministry added 9,400 new confirmed infections to the total and 156 deaths.

The country has been experiencing one of Europe’s steepest second curves of contagion, with new cases increasing since mid-July. More than half of the newly infected didn’t develop symptoms and are mostly between 20 to 60 years old who didn't end up requiring treatment.

Health workers in the Madrid region staged small-scale protests at the gates of health centers and smaller clinics on Tuesday, demanding more resources to treat patients with COVID-19.

At least 8.5% of hospital beds in Spain are used for treating nearly 10,000 coronavirus patients and 1,273 in intensive care units.

LONDON — Hospitals in England say a shortage of coronavirus tests in Britain is jeopardizing efforts to restore medical services and prepare for a potential surge in coronavirus cases this winter.

National Health Service Providers says inadequate testing is leading to increased absences among NHS workers as they are forced to self-isolate while waiting for test results after possible exposures.

The shortage comes amid a surge in COVID-19 cases across the U.K. Last week, the U.K. recorded more than 3,000 new cases of the virus for three straight days for the first time since May. In response, the government has imposed new limits on public gatherings.

The government says it can process about 243,000 coronavirus tests a day, up from 220,000 at the end of August. The problem is the “second wave″ of the virus is hitting Britain earlier than anticipated, said John Bell, a professor of medicine at the University of Oxford.

ANN ARBOR, Mich. — The University of Michigan is suing to stop a strike by graduate-student instructors after they voted to extend their walkout.

The lawsuit, filed Monday in Washtenaw County court, seeks an injunction that would stop the strike by the Graduate Employees’ Organization, which represents 2,000 graduate-student instructors and graduate-student assistants. The university said a strike is illegal under the contract.

The strike began Sept. 8. Union members said the university isn’t doing enough to prevent the spread of COVID-19. It also wants the campus police budget cut by 50% and an end to cooperation with Ann Arbor police, among other demands.

Approximately 90% of all undergraduate students are enrolled in at least one course that is led wholly or partly by a graduate student, the university said.

BERLIN — Germany says it is providing up to $892 million to support three domestic pharmaceutical companies developing vaccines for the coronavirus.

Science Minister Anja Karliczek says the government has already agreed to pay BioNTech and CureVac to develop their mRNA-based vaccines. Talks with a third company are expected to conclude soon, she says.

IDT Biologika is developing a vaccine that delivers a coronavirus protein into cells to stimulate the body’s immune response.

The agreement with the three companies would guarantee Germany 40 million doses of vaccine. The amount comes on top of other vaccine supply agreements concluded through the European Union, of which Germany is a member.

Karliczek says Germany wouldn’t cut safety corners when it comes to testing vaccines, meaning most of the population may have to wait until mid-2021 to be inoculated.

“We need 55-60% of the population to be vaccinated,” he said. “I’m firmly convinced we will achieve this voluntarily.”

BANGKOK — Thailand’s Cabinet has approved in principle a plan to reopen the country to tourists by issuing special renewable 90-day visas and limiting their numbers to 1,200 a month.

Deputy Government Spokeswoman Traisulee Traisaranakul says the program, proposed to begin next month, is an effort to boost the coronavirus-battered economy, especially the tourism sector.

Under the plan, visitors would stay in quarantine at a hotel or hospital for 14 days on arrival and show confirmation they’ve made arrangements for long-term accommodations. The cost of the “special tourist visa” would be 2,000 baht ($64), with the same charge for each of two allowed renewals.

Thai health officials on Tuesday reported five new cases, from people arriving from abroad. That brings the confirmed total to 3,480 cases and 58 dead.

CHARLOTTE, N.C. — A county in North Carolina incorrectly told nearly 7,000 residents they had tested positive for the coronavirus.

The Charlotte Observer reports the messages were sent by text messages to more than 6,700 residents in Mecklenburg County on Friday. More than 500 people also received a county email with the notice.

The county said Friday on Twitter the messages went out due to a technical glitch. The county’s manager told county commissioners on Monday they were sent through HealthSpace Data System, a company based in Canada. The county has been using the company’s software to help with contact tracing efforts in the pandemic.

HealthSpace CEO Silas Garrison apologized for “any alarm this caused citizens who were not supposed to be sent an alert or survey.”

A corrected text or email was sent to those who received the incorrect messages, Diorio said.