The Latest: Nancy Pelosi reelected speaker of the House 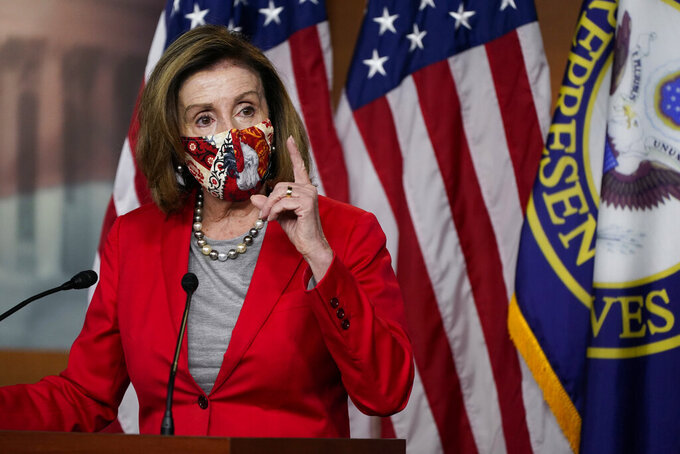 WASHINGTON (AP) — The Latest on the new session of Congress (all times local):

Nancy Pelosi has been narrowly reelected Sunday as speaker, giving her the reins of Democrats’ slender House majority as President-elect Joe Biden sets a challenging course of producing legislation to tackle the pandemic, revive the economy and address other party priorities.

The California Democrat, who has led her party in the House since 2003 and is the only woman to be speaker, had been widely expected to retain her post. Rep. Kevin McCarthy R-Calif., again will be the chamber’s minority leader.

To gain her victory, Pelosi had to overcome some Democratic grumbling about her longevity, a slim 222-211 edge over Republicans after the November election, and a handful of absences because of the coronavirus.

There are two vacancies in the 435-member House, and whatever happens Democrats will have the smallest House majority in two decades.

Former House Speaker Paul Ryan says in a statement that Democrat Joe Biden’s presidential victory is “entirely legitimate.” He is condemning efforts by some Republicans to object to the results and overturn the election in the congressional count of electoral votes on Wednesday.

The group of House and Senate Republicans are echoing President Donald Trump’s baseless claims of widespread voter fraud. Ryan, who left Congress in 2019, says it “is difficult to conceive of a more anti-democratic and anti-conservative act than a federal intervention to overturn the results of state-certified elections and disenfranchise millions of Americans.”

Ryan urged the lawmakers to reconsider, saying “the fact that this effort will fail does not mean it will not do significant damage to American democracy.”

The objections will force votes in both the House and Senate, where they are expected to be rejected.

There was not widespread fraud in the election, as has been confirmed by a range of election officials and by William Barr, who stepped down as attorney general last month. Nearly all of the legal challenges put forth by Trump and his allies have been dismissed by judges.

A bipartisan group of 10 senators has issued a statement calling for Congress to certify President-elect Joe Biden’s win.

The senators, including four Republicans, said in the statement on Sunday that efforts by some Republicans to overturn the results in favor of President Donald Trump “are contrary to the clearly expressed will of the American people and only serve to undermine Americans’ confidence in the already determined election results.”

Republican Sens. Susan Collins of Maine, Lisa Murkowski of Alaska, Bill Cassidy of Louisiana and Mitt Romney of Utah signed on to the statement, which said “it is time to move forward.”

A separate group of Senate Republicans, led by Sens. Josh Hawley and Ted Cruz, say they plan to object to the election results when Congress meets on Wednesday to tally Biden’s 306-232 Electoral College victory over Trump.

The objections will force votes in both the House and Senate, but none are expected to prevail.

Republican Senate Leader Mitch McConnell has urged Republicans not to object. And several other GOP senators have criticized the efforts, splitting the party as the new Congress begins. Nebraska Sen. Ben Sasse said Sunday that the objections are “bad for the country and bad for the party.”

Fraud did not spoil the 2020 presidential election, a fact confirmed by election officials across the country.

HERE’S WHAT YOU NEED TO KNOW ABOUT THE NEW CONGRESS

WHAT ELSE IS GOING ON:

Republican Sen. Lindsey Graham is calling the effort by Sen. Ted Cruz and other Republican senators to overturn the presidential election a “dodge” that doesn’t go far enough in helping President Donald Trump.

Graham said in a statement Sunday that Cruz has a “high bar” to show there was evidence of problems with the election. The South Carolina senator also said Cruz’s proposal has “zero chance of becoming reality.”

Cruz of Texas is leading a coalition of 11 GOP senators who vow to challenge the election results unless Congress agrees to launch a commission to investigate the outcome. They and others are prepared to object Wednesday when Congress convenes for a joint session to confirm Biden’s 306-232 electoral tally over Trump.

Graham, a top Trump ally, said that approach “is not effectively fighting for President Trump. It appears to be more of a political dodge than an effective remedy.”

The 117th U.S. Congress is beginning as the House and Senate have gaveled in to swear in new members.

Both chambers are holding rare Sunday sessions to open the new Congress on Jan. 3, as the Constitution requires. All members of the House and roughly one-third of the Senate will be sworn in.

Democrat Nancy Pelosi was set to be reelected as House speaker by her party, which retains the majority in the House but with the slimmest margin in 20 years.

Control of the Senate is in question until Tuesday’s runoff elections for two Senate seats in Georgia. The outcome will determine which party holds the chamber.

Senate Majority Leader Mitch McConnell is declining to say much about the effort by a growing number of Republican senators to overturn the presidential election.

McConnell told a reporter Sunday at the Capitol, “We’ll be dealing with all of that on Wednesday.”

The Republican leader was referring to this week’s joint session of Congress to confirm the Electoral College tally that Joe Biden won, 306-232, defeating President Donald Trump.

McConnell has privately urged Republicans not to object to the election results. He has said it would force Republicans to essentially choose between Trump’s demands and the will of the voters.

A dozen Republican senators, and more Republicans in the House, plan to object on Wednesday.

Sen. Ted Cruz says Congress has an obligation to ensure the presidential election was lawful, explaining why he and some Republican colleagues will raise objections when Congress meets this week to certify the Electoral College vote.

He tells Fox News Channel’s “Sunday Morning Futures” that the aim is to restore Americans’ “confidence in our electoral system.”

Numerous federal and state officials have said the election was conducted fairly and without evidence of fraud on a scale so grand that it would have altered the outcome.

Trump has refused to accept his loss and continues to falsely claim the election was “stolen.”

Groups of House and Senate Republicans plan to vote against certain state electors on Wednesday, but it will not halt Biden’s swearing-in as president at noon on Jan. 20.

Republican Sen. Josh Hawley is hitting back at GOP colleagues who are criticizing his attempt to overturn the presidential election won by Joe Biden.

In a lengthy email, the Missouri Republican defended his rationale for challenging President Donald Trump’s defeat. He and other Republicans are planning to mount objections to the results when Congress convenes for a joint session Wednesday to confirm the Electoral College tally.

Hawley specifically defended himself against criticism from GOP Sen. Pat Toomey of Pennsylvania as he challenges that state’s election results.

Hawley, a Trump ally and potential 2024 presidential candidate, insisted that constituents back home have been “loud and clear” that they believe Biden’s win over Trump was unfair.

“It is my responsibility as a senator to raise their concerns,” Hawley wrote late Saturday.

Sen. Ron Johnson is insisting that the extraordinary effort by congressional Republicans to challenge Joe Biden’s presidential victory is not intended to thwart the democratic process but “to protect it.”

In an interview with NBC’s “Meet the Press,” the Wisconsin senator pointed to an “unsustainable state of affairs” where he claimed that many people in the country don’t accept the election as legitimate. He contends that more transparency is needed to “restore confidence” in results that states and the Electoral College have certified.

A group of 11 senators led by Sen. Ted Cruz of Texas say they will reject the Electoral College results during a joint session Wednesday unless a commission is appointed to conduct a 10-day audit of the vote. They are zeroing in on the states where President Donald Trump has raised founded claims of voter fraud.

Johnson isn’t offering new evidence of voting problems. And he does acknowledge that Trump’s former attorney general, William Barr, found no evidence of widespread election fraud. Multiple lawsuits filed by Trump’s legal team have been repeatedly dismissed, by the Supreme Court and by Trump-appointed judges who have ruled the suits lacked evidence.

When Johnson insisted that “tens of millions of people” believe the presidential election was “stolen,” NBC’s Chuck Todd suggested that Johnson “look in the mirror” as to why that is. Todd cut off Johnson’s unsubstantiated assertions.

Todd told Johnson: “You don’t get to make these allegations that haven’t been proven true.”

The start of the new congressional session on Sunday comes during a tumultuous period in U.S. history.

A growing number of Republicans are working to overturn Joe Biden’s victory over President Donald Trump, and a surge of coronavirus infections is imposing limits at the Capitol.

Rep. Nancy Pelosi is set to be reelected as House speaker by fellow Democrats, who retain the House majority but with the slimmest margin in 20 years.

Opening the Senate could be among Mitch McConnell’s final acts as majority leader. Republican control depends on Tuesday’s runoff elections for two Senate seats in Georgia.

It’s often said that divided government can be a time for legislative compromises, but lawmakers are charging into the 117th Congress with the nation more torn than ever, disputing even basic facts including that Biden won the presidential election.