The Latest: Nevada gov to get test after staffer is positive 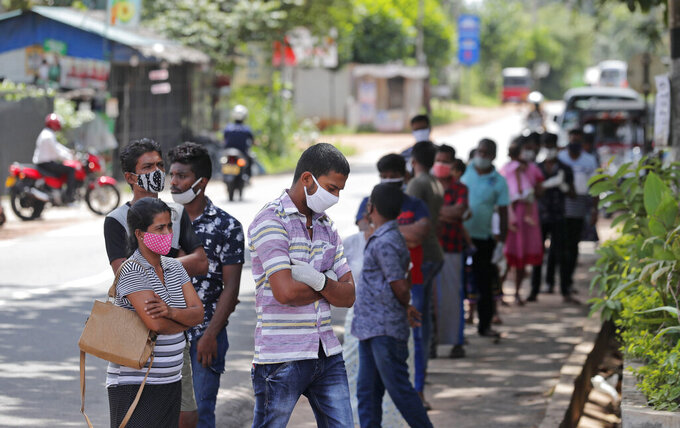 Sri Lankans wait to give swab samples to test for COVID-19 outside a hospital in Minuwangoda, Sri Lanka, Tuesday, Oct. 6, 2020. (AP Photo/Eranga Jayawardena)

RENO, Nev. — Nevada Gov. Steve Sisolak will be tested for the coronavirus and work out of his Las Vegas office indefinitely after a positive test was confirmed for a staff member working at the governor’s office in the state Capitol in Carson City.

Communications director Meghin Delaney said Tuesday that the staffer has not had in-person contact with the governor since mid-September. She says Sisolak departed northern Nevada on Sept. 17 and has been working from Las Vegas since then.

The governor had been scheduled to return to Carson City next week but his travel is on hold until officials get test results for all staffers there.

— How do I politely ask someone to wear a mask? If in store or restaurant, have a manager make the request

— Despite decades of warnings about the fragile supply lines bringing protective gear from overseas factories to America’s health care workers, the U.S. was unprepared for the coronavirus pandemic.

— Hospitals and staff are stretched to their limits again in Madrid, where the surging number of COVID-19 patients in September forced an expansion of critical care beds into gymnasiums.

— Service workers in New Orleans who were laid off because of the coronavirus’s impact on the economy are earning a living by helping others survive during the pandemic.

TALLAHASSEE, Fla. -- The president of Florida State University has become the latest high-profile figure linked to the school to test positive for the coronavirus, and he is isolating at home with his wife, who also has tested positive.

The university said John Thrasher received his test result Tuesday after his wife, Jean, was tested due to unrelated medical treatment. The statement said both are feeling well.

The announcement came one day after word that Hall of Fame former Florida State football coach Bobby Bowden tested positive for the virus. Current coach Mike Norvell sat out from the season at least 10 days last month while isolating at home after testing positive.

The university had a surge of cases in late August and early September..

Robert Gordon said Tuesday that he has reimposed rules for nursing homes and other such care facilities. He told local health departments to inform K-12 schools within 24 hours of learning of a confirmed or probable case of COVID-19.

The steps came a day after Gordon ordered the wearing of masks and limits on gathering sizes following the court decision that declared unconstitutional a law that Gov. Gretchen Whitmer had used to extend an emergency order on virus-related restrictions.

Opponents of the orders could file lawsuits.

ATLANTIC CITY, N.J. — Two highly regarded restaurants in Atlantic City will remain closed permanently, victims of the coronavirus and the restrictions that came with it.

Philadelphia restaurateur Stephen Starr told The Associated Press on Tuesday that Buddakan and The Continental will not reopen. They have been closed since mid-March.

Both were inside the former Playground Pier, which Caesars Entertainment recently repurchased. The pier has had extremely low levels of foot traffic and a majority of its stores have been empty for more than a year.

The two restaurants employed more than 100 people, who were notified late Monday that the businesses would not reopen.

Starr said that “it was a nice run, but we had to say goodbye." He operates high-profile restaurants in Philadelphia, New York, Washington and Paris that remain in business.

OKLAHOMA CITY, Okla. — Oklahoma’s two largest universities are both delaying the start of their spring semester and canceling spring break because of the coronavirus pandemic.

Oklahoma State University and the University of Oklahoma each announced the delays Tuesday, with OSU beginning spring classes Jan. 19 and OU starting Jan. 25., one week later than previously scheduled. OU also said that all classes will be held online following the Thanksgiving holiday.

Also, the governor of the Cheyenne and Arapaho Tribe, Reggie Wassana, announced Monday that he tested positive for the virus. Wassana said he had a mild headache and runny nose, but no fever.

The state health department on Tuesday reported 1,364 new confirmed cases and 11 more deaths from COVID-19, raising the overall totals to 93,346 cases and 1,066 deaths.

Coronavirus cases in Oregon have been climbing during the past few weeks.

Health officials said that with Oregon’s jump in testing capacity, they recommend people who have symptoms of COVID-19 not only be tested but also people who have been in close contact with an infected person, regardless of whether they show symptoms.

The rapid antigen tests, which are being provided by the federal government each week through the end of 2020, can diagnose COVID-19 in 15 minutes.

BOSTON — Brigham and Women’s Hospital in Boston and the Broad Institute of MIT and Harvard are teaming up for a six-month study of 10,000 people to help them better understand the prevalence of COVID-19 in the area and to help identify potential surges during the fall and winter.

The study, called TestBoston, will provide monthly at-home kits for both the virus and antibodies against it, the organizers said Tuesday.

Participants, selected from Brigham and Women’s patients and reflecting the demographics of greater Boston, will also complete routine symptom surveys and will be able to seek additional testing should they develop symptoms.

Study results may reveal critical clues and warning signs about how COVID-19 cases are changing in the area, while helping investigators establish a model for at-home sample collection, the statement said.

The study will also help clinicians learn more about whether prior infection provides any protection against subsequent re-infection.

SIOUX FALLS, S.D. — South Dakota Gov. Kristi Noem has no plans to get tested for the coronavirus before heading back to the president’s campaign trail this week, even though she attended a fundraiser with the president shortly before he tested positive.

Noem’s spokesman, Ian Fury, said Tuesday she has “no plans to get tested in the immediate future” because she has not been in close contact with anyone who tested positive for the coronavirus.

The Republican governor tested negative for the virus on Sept. 29, a day before the Trump fundraiser in Minnesota. But she did not get close enough or spend enough time with the president to become a close contact, as defined by the Centers for Disease Control and Prevention, according to Fury.

South Dakota has seen a surge in cases and hospitalizations in recent weeks. But Noem has not stopped traveling for the campaign or holding events. She spoke to South Dakota legislators gathered for a special session on Monday, and she will next head to Florida for a Trump rally. She is also slated to speak Friday at the American Priority Conference, a gathering of the president’s supporters, at Trump National Doral hotel in Miami.

NEW YORK — The United States was unprepared for the coronavirus pandemic and failed to react quickly, despite decades of warnings about diminishing medical supplies and protective equipment.

That’s according to a seven-month Associated Press and “FRONTLINE” investigation that examines the deadly consequences of a fragmented worldwide medical supply chain.

Nurse Sandra Oldfield in Fresno, California, was among the first to become sick with COVID-19 after caring for an infected patient. She had asked for more protection but was only provided a flimsy surgical mask. Oldfield is one of more than 1,700 health care workers who have died from COVID-19, according to a National Nurses United study released in September.

The CDC released the report, authored by a team of Arizona health officials.

The report noted the average number of daily cases skyrocketed in the state in early June, after a stay-at-home order lifted. But they leveled off and then dropped dramatically after local officials began implementing and enforcing rules about mask wearing, closures of certain businesses and other measures.

The study didn’t prove the measures caused the decline, but the researchers say there was a clear correlation and communities should take such steps against spread of the virus.

MADISON, Wis. — Wisconsin Gov. Tony Evers issued a new order limiting the size of public indoor gatherings in his state, which has become a hotspot for the coronavirus.

The state ranked third nationwide this week in the number of new cases per capita with 548, according to Johns Hopkins University.

The order from state Department of Health Services Secretary Andrea Palm limits public indoor gatherings to 25% of a room or building capacity. Gatherings in indoor spaces without an occupancy limit will be limited to 10 people. The order doesn’t apply to colleges, schools, churches, polling locations, political rallies and outdoor venues.

The limits take effect on Friday and run through Nov. 6.

“We’re in a crisis right now and need to immediately change our behavior to save lives,” Evers said in a statement.

LONDON — Britain has recorded 14,542 confirmed cases of coronavirus, an increase of nearly 2,000 in the past day.

Large parts of northern England are under tough coronavirus restrictions as infection rates in that region have spiked.

The latest figures show the official coronavirus death toll in the U.K. has reached 42,445. However, that number only includes people who died within 28 days of testing positive.

The total is more than 58,000 if the death toll included cases where coronavirus was suspected.

BERLIN — Berlin officials have issued a nightly business curfew to clamp down on rising coronavirus infections.

Starting this weekend, most stores, restaurants and bars will close between 11 p.m. - 6 a.m., with exceptions only for pharmacies and gas stations. The measures will last until Oct. 31.

The number of people allowed to congregate outside during those hours will be limited to five, or to members of two households. A maximum of 10 people will be allowed to participate in private indoor celebrations, down from 25.

On Monday, Germany surpassed 300,000 coronavirus cases. Another 2,639 confirmed cases were added overnight and 12 deaths, taking the overall death toll to 9,546.

MADRID — Spanish Health Minister Salvador Illa is highlighting key differences between the first wave of the coronavirus pandemic and the current second wave in his nation.

Illa says the death rate has dropped to 1% of cases from 12% during the initial outbreak.

In the first wave, authorities detected only around 10% of cases. Now, it’s around 70-80%. He also noted that 1 in 4 cases are asymptomatic.

Nearly 4.8 million residents in or around Madrid, are under restrictions on movement due to the second wave. The Health Ministry announced nearly 12,000 new cases on Tuesday.

WEST DES MOINES, Iowa — An educator in a Des Moines suburb has died from complications of the coronavirus, but authorities are unable to say whether she contracted the virus at school. Jennifer Crawford, a special education assistant at Indian Hills Junior High School in West Des Moines, died Monday, Principal Shane Christensen announced.

School district spokeswoman Laine Mendenhall-Buck says Crawford was out of the state when her symptoms began, and she hadn’t been at the school for several weeks.

Iowa had the fourth-highest positivity rate in the nation on Monday. Iowa reported 11 additional deaths in the past day and 522 new confirmed cases.

AMMAN, Jordan — Authorities in Jordan say they will impose a full lockdown on Friday and Saturday to contain a resurgent coronavirus outbreak and the army will deploy in all cities.

In-class education will be suspended from Friday until further notice. Universities also will shift to remote learning, except for medicine and nursing schools. The measures were announced Tuesday in a televised briefing by several senior officials.

People were ordered to remain in their homes Friday and Saturday, with only medical staff and those carrying out epidemiological investigations permitted on the streets.