The Latest: New outbreak delays easing of rules in Melbourne 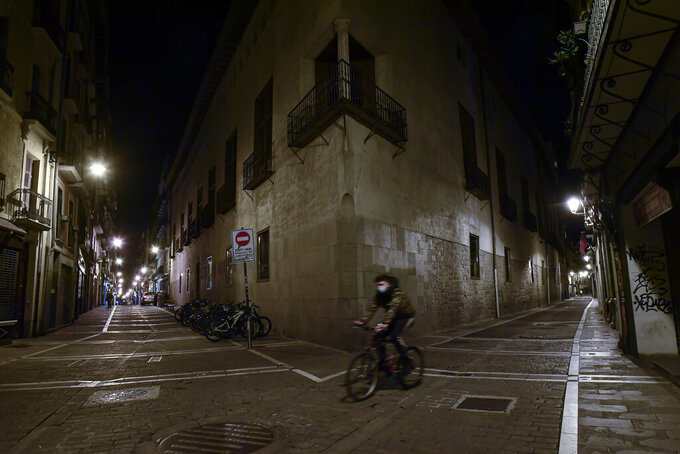 A cyclist wearing face mask protection crosses along an empty High street, in Pamplona, northern Spain, Saturday, Oct. 24, 2020, as new measures against the coronavirus began in the Navarra province where all bar and restaurants are closed for 15 days from midnight Wednesday. (AP Photo/Alvaro Barrientos) 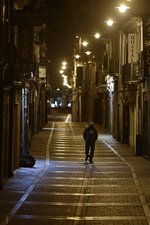 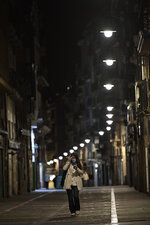 MELBOURNE, Australia — A COVID-19 outbreak in the north of Melbourne has led health authorities in Australia’s Victoria state to hold off on any further easing of restrictions in the beleaguered city.

Victoria Premier Daniel Andrews withheld any announcement on an easing on Sunday as the state awaits results on 3,000 people who were tested in the city’s north in the past 24 hours.

He described it as a “cautious pause” - not a setback - to rule out there wasn’t widespread community transmission linked to the cluster.

Among the current restrictions are mandatory wearing of masks and no traveling beyond 25 kilometers (15 miles) from home. At the start of the second wave of cases two months ago, Andrews instituted an overnight curfew and shut down most businesses.

“I know it is frustrating,” Andrews said. “I know people are keen to have a long and detailed list of changes to the rules. It is not appropriate for us to do that now.”″

Victoria reported seven new coronavirus cases on Sunday, with six linked to the latest outbreak, which involves 39 people across 11 households.

No additional deaths kept the state toll at 817 and the national toll at 905.

— Iran’s supreme leader has urged authorities to prioritize public health above any economic or security concerns, amid the Mideast’s worst outbreak of the coronavirus. Iran’s death toll from the global pandemic topped 32,000 this week.

— Pope Francis met with the Spanish prime minister Saturday at the Vatican, which has had a rash of COVID-19 infections confirmed in recent days, but neither man used a face a mask during the public part of their meeting.

— Poland’s President Andrzej Duda has tested positive for the coronavirus; apologizes to those in quarantine because of contact, including Poland's recent French Open winner.

— Police force in England says it will try to stop people from leaving Wales, which has started a 17-day lockdown to slow a surging rate of coronavirus infections.

COLOMBO, Sri Lanka — Sri Lankan authorities have terminated a number of passenger trains and widened the curfew as COVID-19 cases related to a new cluster at a garment factory continue to surge.

The Railway Department canceled at least 16 trains — mostly ran through busy office hours — after the number of commuters declined due to the curfew imposed in many parts of the country.

More than a dozen villages are isolated in densely populated Western province, which includes capital Colombo.

Authorities last week closed the island’s main fish market on Colombo’s outskirts after 49 traders tested positive for the coronavirus. By Sunday, the number of cases from the fish market went up to nearly 900.

Authorities say the outbreak is linked to a cluster in a garment factory early this month, which has grown to 4,052 cases, more than half the country’s total of 7,521. During the last 24 hours, 368 new cases have been detected.

In a bid to contain the spread, health authorities also closed three fishery harbors and many fish stalls around the country.

Several thousand people have been asked to quarantine at home. Schools and key public offices are closed and gatherings banned. The death toll rose to 15 on Saturday.

BOGOTA, Colombia — Colombia reached 1 million confirmed coronavirus cases on Saturday, its health ministry says, becoming the second country in Latin America to report that number in less than a week.

The nation of 50 million saw cases peak in August and has seen a decline since but still continues to register around 8,000 new infections a day.

Overall, Latin America continues to register some of the highest caseloads, diagnosing more than 100,000 confirmed infections each day, though the World Health Organization reports that Europe is now seeing even larger numbers as a second virus wave strikes.

LANSING, Mich. — Michigan has reported more than 3,000 new confirmed cases of the coronavirus — the highest daily count yet during the pandemic.

The 3,338 new COVID-19 cases reported Saturday by the Michigan Department of Health and Human Services surpassed the state’s previous single-day record of 2,030 new cases set on Oct. 15. That earlier record had topped the previous record of 1,953 from early April.

Dr. Joneigh Khaldun, Michigan’s chief medical executive, said in a statement that it’s “now more important than ever that people take this seriously.” She urged Michigan residents to wear a face mask every time they are around someone outside of their own household, to practice social distancing and avoid large gatherings.

EL PASO, Texas — The surge in coronavirus in the Texas border city of El Paso continued Saturday with a record 1,216 new cases, nearly 20% of the state’s 6,125 new cases, according to city-county health officials.

There have been 3,346 cases in the city during the past three days, according to city-county health reports. El Paso has reported 38,554 total cases since the pandemic began in March.

“Today’s spike is part of an unfortunate national surge that we have been planning and preparing for,” public health director Angela Mora said in a statement. “Now, we need our community to help us by doing their part and staying home, if and when possible, for the next two weeks in order to stop the rapid the spread of the virus.”

Gov. Greg Abbott has sent medical equipment and about 500 medical personnel to the region to help fight the virus. There have been more than 858,000 reported cases in Texas and nearly 17,500 deaths, 81 reported Saturday, since the pandemic’s start.

COLUMBIA, Tenn. — A Tennessee hospital is suspending all elective procedures requiring an overnight stay due to a surge in patients hospitalized with COVID-19, The Daily Herald of Columbia, Tennessee, reported.

As of Friday evening, Columbia’s Maury Regional Medical Center was treating 50 COVID-19 inpatients, 20 of whom were in the medical center’s 26-bed intensive care unit. In response, the hospital said Friday it is suspending elective surgical procedures that require an overnight stay for two weeks, beginning on Monday.

“The time has long passed for our community to take this virus seriously,” Alan Watson, CEO of Maury Regional Health, said in a Friday statement. “We are seeing the impact of our community letting down their guard, and we must make every effort to mitigate the spread of this virus.”

On Thursday, the Tennessee Department of Health reported that statewide hospitalizations had reached a new record of 1,300 patients with COVID-19 and had an ICU bed availability of just 11%.

Martin Chaney, Maury Regional’s chief medical officer, said small home gatherings have become the emerging threat through which the disease is being spread in the six-county region the medical center covers.

“In our homes, we all let our guard down,” Chaney said. “You think it is safe to not socially distance, and you take your masks off. That is spreading the disease very rapidly.”

He said Maury Regional has consistently seen a surge in cases about two weeks after each major holiday.

“It is so predictable now,” Chaney said. “When families travel and get together for holidays, it is a high-risk time for spreading the virus.”

Tennessee recorded 2,574 new cases of the coronavirus on Saturday and 24 new deaths, bringing the total number of deaths in the state to 3,100.

VATICAN CITY — Pope Francis met with the Spanish prime minister at the Vatican, but neither man wore a mask during the public part of their meeting.

That’s despite 13 Swiss Guards and someone staying at the same Vatican City guest house where Francis lives recently testing positive for the coronavirus.

Prime Minister Pedro Sanchez wore a mask when he arrived in a Vatican courtyard, but everyone sat unmasked immediately before and after his closed-door talks with Francis.

The Vatican says Sanchez also spoke with the Holy See’s foreign minister, discussing matters including “the current health emergency, the process of European integration and migration.”

In his speech, Francis called politics “an act of charity, nobility” and the mission of a politician is to help a nation to progress. The pontiff also says its “very sad” when ideologies drive the destiny of a nation.

PHOENIX — Arizona is experiencing increases in coronavirus cases and the rate of positive test results.

Rolling averages even out daily spikes and drops.

The state Department of Health Services on Saturday reported 890 cases and four additional deaths, increasing the Arizona totals to 236,772 confirmed infections and 5,869 deaths.

The Oklahoma State Department of Health report on Saturday comes one day after Gov. Kevin Stitt extended a state of emergency another 30 days. The health department reported 1,829 new cases for a total of 115,685.

That’s despite a few thousand fewer swab tests performed, according to the Health Ministry.

Lombardy, where the outbreak has been most devastating, registered more than double the number of daily cases than any other region.

The nation’s confirmed death toll, second highest in Europe after Britain’s, rose to 37,210, after 151 more deaths.

CHICAGO — Illinois health officials reported a one-day record of 6,161 confirmed cases of the coronavirus on Saturday.

The Illinois Department of Public Health also reported 63 more people died of the virus, bringing the statewide total to 9,481 since the start of the pandemic.

Illinois officials have warned in recent days the state is experiencing a second surge and pleaded with people to wear face coverings and take other precautions.

The total confirmed cases since the beginning of the pandemic is 29,992 and 564 deaths.

Blazej Spychalski says Saturday on Twitter the 48-year-old conservative leader was tested the day before and his result was positive. He says the president feels well and is in isolation.

Duda’s diagnosis comes amid a huge surge in the number of confirmed cases of COVID-19 and deaths in Poland, a nation that had low numbers in the spring.

The spiking infection rates are pushing the country’s strained health system to the breaking point. The government is preparing to open field hospitals but it is not sure where it will find the doctors and nurses to staff them.

Duda on Friday visited the National Stadium in Warsaw, which is being transformed into one of the field hospitals. He also met Friday with Iga Swiatek, the 19-year-old Polish tennis player who won the French Open this month.