The Latest: NHL postpones Avalanche games due to COVID-19 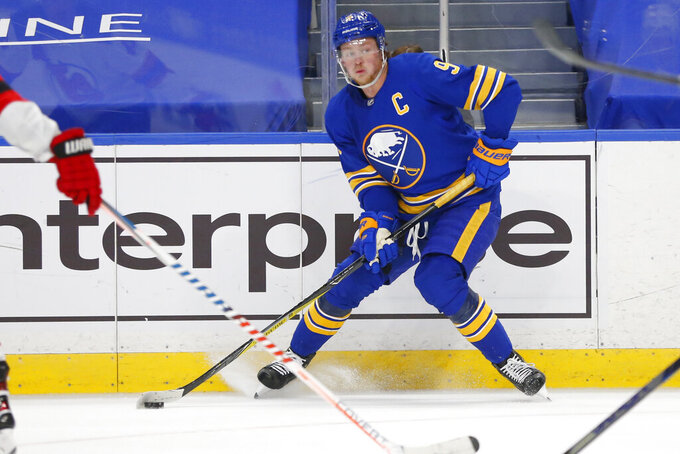 The NHL has postponed the Colorado Avalanche’s games through Feb. 11.

Colorado becomes the fifth team shut down, joining Vegas, New Jersey, Buffalo and Minnesota. Dallas and Carolina were put on pause because of outbreaks in January.

The Avalanche currently have two players on the league’s COVID-19 list: captain Gabriel Landeskog and forward Tyson Jost. They played the Wild, who now have seven players on the list, three times over the past week and already had their game scheduled for Thursday night postponed.

There are 40 players from 11 teams on the COVID-19 unavailable list, and the league instituted new protocols Thursday in an attempt to slow the spread of the virus.

Michigan's fourth-ranked men's basketball team took a step toward returning to the court, allowing athletes to have their skills, strength and conditioning assessed by coaches after a pause that lasted nearly two weeks.

Michigan paused all of its athletic programs on Jan. 23 after several people within the athletic departed tested positive for a COVID-19 variant that transmits at a higher rate.

The move to shut down the teams was made after the state Department of Health and Human Services said it issued recommendations for the school. University officials interpreted the recommendations as an order.

Michigan’s men’s basketball team is scheduled to play Feb. 11 at home against No. 12 Illinois.

The No. 2 Baylor men have had their next two games postponed by the Big 12 because of COVID-19 protocols, the Bears’ season getting interrupted again after a 17-0 start that is the best in school history.

The Big 12 announced late Thursday that Saturday’s home game against TCU and next Wednesday’s game at Oklahoma have been postponed in accordance with the league’s interruption guidelines. Neither the league nor Baylor provided specifics.

Baylor is coming off a win at No. 6 Texas on Tuesday night, the first meeting this season between the Top-10 teams. Their scheduled Dec. 13 game in Waco, which hasn’t yet been rescheduled, was postponed after the Bears had a program pause because of COVID-19 issues then.

With the latest changes, Baylor’s next scheduled game is at home Feb. 13 against No. 13 Texas Tech.

The NHL is releasing the names of players who are “unavailable” to the club for practice, travel or games due to virus protocols.

In a statement, commissioner Gary Bettman said: “It is important to note that, while we have seen almost 100 players enter our COVID Protocols, fewer than half have done so because of confirmed positive tests -- and, among that group, many have not been symptomatic. Our priority has been and will continue to be to act conservatively with an abundance of caution, understanding that there are many things about the transmission of COVID-19 that are still being discovered.”

The Cleveland Cavaliers have been given permission to increase their attendance at home games.

The team received a letter Thursday from the state of Ohio, which has granted a second variance and will allow the Cavs to have 2,720 (14%) inside 19,000-seat Rocket Mortgage FieldHouse. It’s a bump of 4% of what had previously been allowed.

The change takes effect immediately. The Cavs host the Milwaukee Bucks on Friday and Saturday.

Last week, the Cavs held a Zoom meeting with state officials to outline their plans to accommodate more fans during the COVID-19 pandemic. The team would like to get another increase if possible.

Cleveland is one of eight NBA franchises currently allowing fans.

West Virginia is boosting home attendance to 2,800, or 20% of capacity, for the men’s basketball game Feb. 13 between the 17th-ranked Mountaineers and No. 9 Oklahoma.

No fans, except for essential personnel and the players’ and coaches’ families, were allowed at home games in Morgantown, West Virginia, over the first two months of the season. Attendance was limited to 1,000 for the Jan. 30 Florida game and 1,500 for the upcoming game Saturday against No. 23 Kansas.

The Canisius athletic department announced Thursday that the Golden Griffin women’s basketball program will not complete the remainder of the season due to health and safety concerns.

The school, a member of the Metro Atlantic Athletic Conference, said the decision was made after conversations between the athletes, coaching staff and athletic department administration.

The Griffs have not been able to play a game since Dec. 20, and the team’s current pause will not allow it to return to game action until at least Feb. 18. Injuries also have affected the roster, and that has impacted the program’s ability to safely practice and compete.

The NCAA announced Wednesday that it was canceling the Division III winter championships due to low participation numbers among member schools.

Canisius said it will maintain its current schedule of competition in other sports.

The National Lacrosse League says its plans for an abbreviated season this spring have been canceled due to uncertainties arising from the coronavirus pandemic.

The league will now move to start a traditional season in the fall. NLL commissioner Nick Sakiewicz says the logistical challenges, including the recently announced tighter travel and quarantine restrictions across the Canadian border, forced the league to pivot.

The exact start date of a full season will be announced at a later date, and it will stretch into 2022.

The NLL is comprised of 14 franchises across the United States and Canada.

The WTA’s Volvo Car Open in Charleston, South Carolina will conduct its April tournament without fans because of the continuing coronavirus pandemic.

Event organizers announced the decision Thursday. The tournament is traditionally the first clay-court tournament of the season.

The tournament was canceled last April because of the coronavirus and organizers began ticket sales in November for this year’s event.

Tournament director Bob Moran said for the Volvo Car Open to comply with health and safety protocols, measures would have to begin this week. However, with the pandemic still affecting South Carolina, Moran said that’s not possible.

Moran said those who purchased tickets for the tournament will be contacted about refunds. He also cited uncertainties about travel within and outside the United States as part of the decision.

Thursday’s women’s basketball game between No. 17 Indiana and Rutgers has been postponded because of COVID-19 healthy and safety issues within the Scarlet Knights’ program.

The schools issued a statement saying they had mutually agreed to scrub the game after consulting with university medical officials and Big Ten representatives. They will work with the conference office to try to reschedule the game.

Bill Russell is the latest NBA legend to reveal that he’s gotten the COVID-19 vaccine.

The 11-time NBA champion with the Boston Celtics and Basketball Hall of Famer made the announcement in a video released Thursday by the league. “This is one shot I won’t block,” Russell says in the video, which shows him receiving the vaccine.

Russell participated in the video to encourage others to receive the shot when they have the opportunity, just as Kareem Abdul-Jabbar and Gregg Popovich also did in recent weeks when their vaccinations were filmed on the league’s behalf.

“No Celtics were harmed,” Russell said.

Russell meets the criteria established by the Centers for Disease Control and Prevention surrounding vaccine eligibility. The CDC guidelines suggest that priority for receiving the vaccine should go to health care personnel, those living in long-term care facilities, front-line essential workers, those over the age of 65 and people “with underlying medical conditions” that increase their vulnerability to COVID-19.

The NHL has a series of pandemic protocol adjustments in response to more players being added to the COVID-19 unavailable list.

The glass is being removed from behind team benches to allow for better air flow, no players or coaches are allowed at the game arena until 1:45 before puck drop, except those getting treatment for injuries, all meetings must be virtual and teams have been asked to space out locker rooms to allow for six feet of distance between players.

Deputy Commissioner Bill Daly confirmed those updates in an email to The Associated Press on Thursday morning.

The league is not yet considering adding a daily rapid test to the current PCR testing regimen, like the NBA did.

There are currently 40 NHL players from 12 teams on the COVID list, which could be from a positive test result, symptomatic isolation, high-risk close contact, an unconfirmed virus positive or quarantine for travel purposes.

Four teams are currently shut down because of varying degrees of outbreaks: Vegas, New Jersey, Buffalo and Minnesota. The Wild are the most recent team to have games postponed after five new players were added to the COVID list on Wednesday.

Iowa wrestling coach Tom Brands has tested positive for COVID-19 and will be away from the team until Feb. 13.

Brands, who has no symptoms, tested positive during his regularly scheduled rapid antigen test Wednesday. A PCR test confirmed the result.

Wrestlers, coaches, and staff members are tested daily as part of the Big Ten return-to- play protocols. The defending Big Ten champion Hawkeyes have been dominant this season and are favored to win their 24th NCAA championship but first since 2010.