The Latest: NHL's Canucks get OK to reopen team facilities 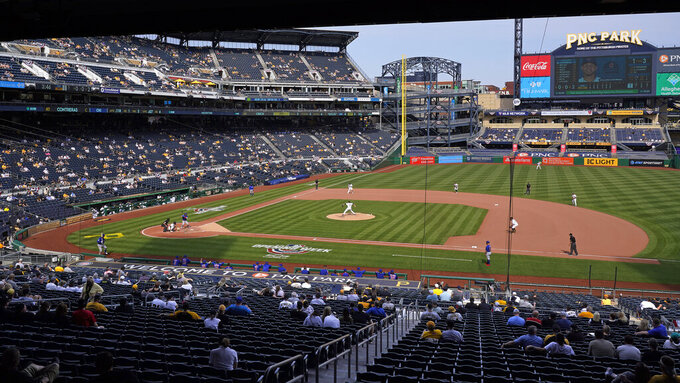 Pittsburgh Pirates relief pitcher Kyle Crick delivers against the Chicago Cubs' Willson Contreras during the seventh inning of a baseball game in Pittsburgh, Thursday, April 8, 2021. A limited number of fans were admitted to the game due to COVID-19 protocol. (AP Photo/Gene J. Puskar)

The NHL says the Vancouver Canucks will reopen team facilities Sunday and resume play Friday after a COVID-19 outbreak in which 21 players and four staff members tested positive for the virus.

The Canucks’ next game will be their first since March 24. They still have 19 players on the league’s COVID protocol list.

Vancouver general manager Jim Benning said Friday he was optimistic his team would still be able to complete the shortened, 56-game season. With schedule changes, the Canucks will need to play six consecutive days and eight of nine to get to 56 games by May 16.

The Stanley Cup playoffs could start for the rest of the league while the Canucks, who are out of contention, play out the string.

The curling world championship playoffs are on hold because of a positive COVID-19 test result inside the bubble set up for a series of events in Calgary, Alberta.

The World Curling Federation said Saturday’s match between the United States and Switzerland has been postponed. The winner was to play Sweden in the semifinals. The Canadian curling federation said the asymptomatic positive test did not involve a competitor on any of the playoff teams.

Organizers said all competitors were to be tested on Saturday morning before play could resume. Scotland had already beaten Canada in the other qualification match, earning a semifinal matchup with the team from Russia.

All six playoff teams earned a spot for their countries in the 2022 Olympics in Beijing.

Last year’s world championships were among the events canceled due to the coronavirus pandemic. This year’s tournament was the last of six curling events planned for a controlled environment in Calgary.

The tournament was scheduled to end on Sunday.

The Professional Women’s Hockey Players Association postponed its Dream Gap Tour stop in St. Louis this weekend after one of its teams was exposed to COVID-19.

The PWHPA did not provide details Saturday on which team was exposed or the number of players. The two-game stop was in partnership with the NHL's Blues, and was to be the association’s third event over the past six weeks.

The teams scheduled to compete are made up mostly of U.S. National team members and based in the PWHPA’s hubs of Minnesota and New Hampshire. Games were scheduled at a community rink on Saturday and at the Blues’ home on Sunday.

The PWHPA says the games will be rescheduled. ___

Driver wasn't feeling well so he stayed in Chicago when the team traveled to Pittsburgh for the start of a six-game trip.

The Cubs were to play the Pirates again on Saturday. Mike Napoli was the first base coach for Chicago's 4-2 win in the series opener Thursday.