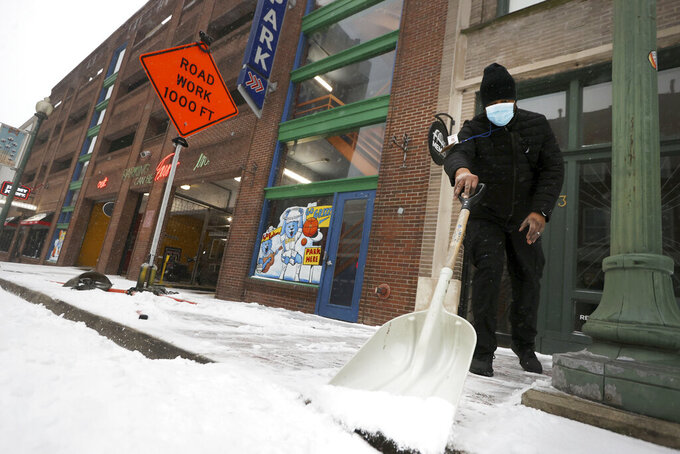 Maintenance workerLelon Armstrong shovels the sidewalk outside a parking garage in Downtown Memphis, Tenn. as below freezing temperatures grip the Mid-South on Monday, Feb. 15, 2021. (Joe Rondone/The Commercial Appeal via AP)

OKLAHOMA CITY — Oklahoma Gov. Kevin Stitt said Wednesday that he is asking President Joe Biden for a federal disaster declaration as a result of a winter storm that dumped snow and ice on the state in addition to days of subfreezing temperatures and power outages.

Stitt’s disaster declaration request for all 77 Oklahoma counties comes a day after the governor spoke with Biden by phone.

“President Biden pledged the federal government’s support for Oklahoma when we spoke by phone,” Stitt said. “I am now urging the president and his administration to act quickly and deliver on our request to help Oklahomans recover from this historic storm.” Stitt declared a statewide emergency last Friday as the winter storm was approaching the state.

Darlene G. Skinner Ragland, 61, of Corbin, died Tuesday after officers were sent to a home in southern Laurel County on a carbon monoxide poisoning call, police said. The home was without power due to winter weather, and the residents were using a generator to help operate a basement sump pump, police said in a news release.

She was taken to a hospital where she died. Her husband and grandchild were treated at a hospital and released.

In western Kentucky, police said Melissa Sheerin, 25, of Crofton, died Friday at a mobile home that had no heat or electricity. A man was also found unresponsive at the home in Guthrie near the Tennessee state line.

HOUSTON — About 7 million people in Texas have been told to boil their tap water before drinking it as of Wednesday afternoon, according to state officials.

That’s a quarter of the population in America’s second-largest state, where days of frigid temperatures have knocked out power in millions of homes and frozen pipes and infrastructure.

Toby Baker, executive director of the Texas Commission on Environmental Quality, said water pressure has fallen across the state because lines have frozen and many residents are dripping their faucets in hopes of preventing their pipes from freezing.

Texas Gov. Greg Abbott urged residents to shut off water to their homes, if possible, to prevent busted pipes and also preserve pressure in their municipal systems.

In New Orleans, the Sewerage and Water Board said power from Entergy was cut to a facility that pumps drinking water from the Mississippi River. Spokeswoman Courtney Barnes said on-site generators were used until Entergy power was restored.

In the southwest Louisiana city of Lake Charles, Mayor Nic Hunter said Wednesday that local hospitals were faced with the possibility they might have to transfer patients to other areas because of low water pressure. “Thankfully, we have not had to do that yet,” he said.

The problems began with a Tuesday power outage that Hunter said came without warning, one of the rolling blackouts instituted by Entergy. The outage caused a drop in water pressure and depletion of reserves— even as many city residents were running their faucets to prevent their pipes from freezing. Without advance notice, Hunter said, it took time to switch the system to generator power.

The governor surveyed the brunt of the damage, at Ocean Ridge Plantation, a neighborhood where residents recounted near-death experiences from the powerful EF3 tornado that approached swiftly.

“It developed so fast,” Conrow told the governor. “I mean, it just was really nothing and just exploded. Within four minutes, we had a tornado on the ground, which is scary because everyone’s in bed at nighttime sleeping.”

He told reporters during Cooper’s visit: “It was just a freak storm that developed so fast we had no chance to respond.”

JACKSON, Miss. — Mississippi Gov. Tate Reeves said Wednesday that the Highway Patrol had worked more than 1,110 wrecks from Sunday through Tuesday, and roads in many parts of the state remained icy and treacherous.

Reeves said the entire state is facing weather challenges in the coming days: The rural Delta could receive a significant amount of ice, the metro Jackson area into the northeastern part of the state could see more snow and ice, and parts of south Mississippi could see hail or tornadoes.

CHARLESTON, W.Va. — West Virginia residents who have endured two ice storms in the past week are preparing for another blast of winter.

Forecasters said up to 6 inches of snow along with accumulations of ice and sleet were likely in much of the state through Friday morning, including higher amounts in the highest elevations.

Warming centers and shelters were open Wednesday in at least seven West Virginia counties, including four apiece in Cabell and Putnam counties, according to the state Department of Health and Human Resources. Appalachian Power said 47%, or about 24,000, of its customers in Cabell County and 31%, or about 9,000 customers, in Putnam County remained without electricity on Wednesday night.

Appalachian Power said it had restored service to more than a third of the 97,000 West Virginia customers who lost electricity after ice accumulations toppled trees and power lines Monday night.

PHILADELPHIA — The School District of Philadelphia announced that with another winter storm on the way, all school buildings would be closed Thursday to allow safe clearing of snow from roads and walkways on school district property.

“With all instruction taking place digitally, there will not be a need to issue a ‘snow day,’ so digital learning and instruction will continue as planned,” the announcement said.

Students were told they would be expected to log on for teacher-led instruction in the morning followed by independent learning tasks in the afternoon.

PORTLAND, Ore. — More than 150,000 remained without power in the greater Portland, Oregon, area Wednesday and authorities warned that outages caused by a fierce weekend storm could continue for several more days.

The Seattle area saw more than a foot of snow and western Oregon was hit with snow and ice that toppled more than 5,000 power lines. Oregon Gov. Kate Brown declared a state of emergency for the greater Portland region following the storm.

Steve Corson, a spokesman with PGE, said “right now we need people to be prepared for the fact that it could be several days yet” before power is restored.

Late Tuesday the Clackamas County Sheriff’s Office confirmed four deaths over the weekend due to carbon monoxide poisoning. While authorities didn’t immediately provide any details about the deaths, they did urge people not to use alternative heat sources like camp stoves or barbecues to stay warm.

According to Grand River Dam Authority police, Greg Garner appeared to have ventured out onto the frozen lake to retrieve two dogs that had fallen through the ice when he also fell through the ice and “succumbed to the dangerously cold waters.”

Garner’s body was discovered by Delaware County deputies about 10 p.m. Monday near a dock. Police say they believe the two dogs also drowned.

Meanwhile, the state Department of Wildlife and Fisheries said cold coastal waters could kill large numbers of fish, though it’s too early to tell if that will happen,

None had been reported as of Wednesday afternoon, department spokesman Rene LeBreton said.

“If fish kills do occur, the fish could be on the bottom of water bodies and may not be visible for a week or more,” the department noted in a news release Tuesday.

OKLAHOMA CITY — Officials in Oklahoma City say a homeless man is believed to the first weather-related death in the city since a winter storm and subfreezing temperatures moved into the state.

The man, described only as being in his 50s, was found west of downtown Oklahoma City, said Jerod Shadid, director of the city’s homeless services.

“With the weather it’s been hard ... to reach some locations, (homeless) camps can be far out in the field” and difficult for officials to reach, Shadid said. “We think it will be likely that we may find more people next week.”

Police Capt. Dan Stewart said there are no other known or suspected weather-related deaths in the city and that the cause of the homeless man’s death, while appearing to be due to the cold weather, will be determined by the state medical examiner.

AUSTIN, Texas — Two people died on the scene after being rescued from a house fire in Austin where firefighters believe the power was out.

Brandon Wade, Austin Fire Department assistant chief of operations, said in a press conference Wednesday that one other person was recovered from the structure and transported to a local hospital in critical condition and three other people escaped with minor injuries.

Austin Fire Department officials said the fire has been extinguished and is under investigation. An official cause has yet to be determined and foul play is not suspected.

Wade said the Austin Fire Department has received numerous calls of residents who have built fires burning charcoal or wood.

“We understand that people have been without power for an extremely long among of time and they are cold,” Wade said. “If you cannot warm yourself with blankets or any other heating device, we ask that you go to a warming shelter or a friend’s house, but we absolutely do not want people starting fires inside their house.”

ATLANTA — Officials in Georgia, Alabama and Oklahoma are among those reporting that snowy and icy weather across much of the nation has “significantly” delayed shipments of COVID-19 vaccines.

The Georgia Department of Public Health said in a statement that both the Pfizer and Moderna vaccines that normally would have arrived the first part of this week were held back by the manufacturers due to the winter weather.

The agency said that as a result, health departments and other vaccine providers have been forced to reschedule appointments. When those shots can be administered will depend on when vaccine shipments resume and when they arrive in Georgia.

Vaccine shipments have also been delayed to a large part of Alabama because the shipper, McKesson Corp., has weather-related problems at its terminal in Memphis, Tennessee, said Ryan Easterling, a spokesman with the Alabama Department of Public Health. He said the vaccine allocated to Alabama will be shipped when weather conditions allow.

Meanwhile, in Oklahoma, deputy state health Commissioner Keith Reed said Wednesday that wintry weather has also caused a delay of “multiple days” in the delivery of the coronavirus vaccine to the state.

“People are working as hard as they can, given the importance of getting the vaccines to the states and to providers, but there is an impact on deliveries,” Zients said “What we’re encouraging governors and other partners to do is to extend hours once they’re able to reopen.”

He added that: "we want to make sure that as we’ve lost some time in some states for people to get needles in arms, that our partners do all they can to make up that lost ground consistent with distributing the vaccine to people as efficiently and equitably as possible.”