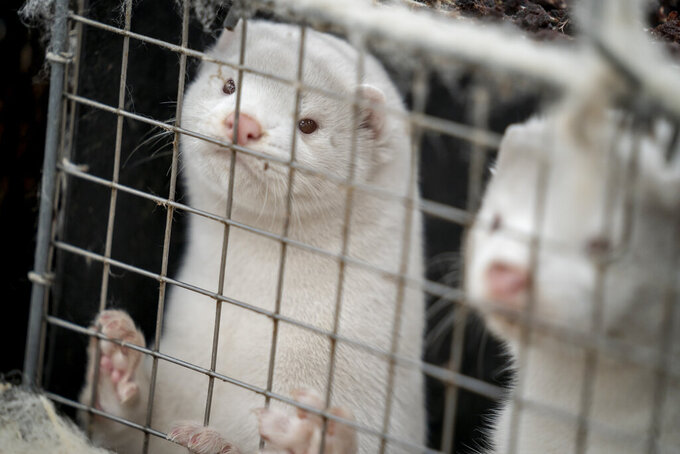 Henrik Nordgaard Hansen and Ann-Mona Kulsoe Larsen kill their herd, which consists of 3000 mother minks and their cubs, on their farm near Naestved, Denmark, Friday Nov. 6, 2020. More than a quarter million Danes have gone into lockdown in a northern region of the country where a mutated variation of the coronavirus has infected minks being farmed for their fur, leading to an order to kill millions of the animals. (Mads Claus Rasmussen/Ritzau Scanpix via AP)

At least a dozen players from the Italian league are being blocked from joining their national teams.

Roma and Fiorentina say their clubs remain in controlled isolation after positive coronavirus cases for Edin Džeko at Roma and José Callejón at Fiorentina.

Genoa, Inter Milan, Lazio and Sassuolo are also in isolation. All the clubs are still playing league games.

Denmark coach Kasper Hjulmand has called up nine new players for an upcoming friendly against Sweden after new quarantine regulations affecting Denmark were introduced by the British government.

According to the new regulations, UK citizens and visa holders can enter the country from Denmark but have to isolate for 14 days upon arrival. Consequently, Denmark players based in England would have to isolate upon their return if they travel to the country for international duty.

The new rules were introduced in response to a mutated variation of the coronavirus among minks in northern Denmark.

Denmark plays Sweden in a friendly on Wednesday, then Nations League games against Iceland in Copenhagen on Nov. 15, and Belgium in Leuven on Nov. 18.

The Danish federation's Jakob Jensen says “We are working hard and hope that the situation will be resolved as soon as possible so that we can play with our strongest national team in the remaining matches.”