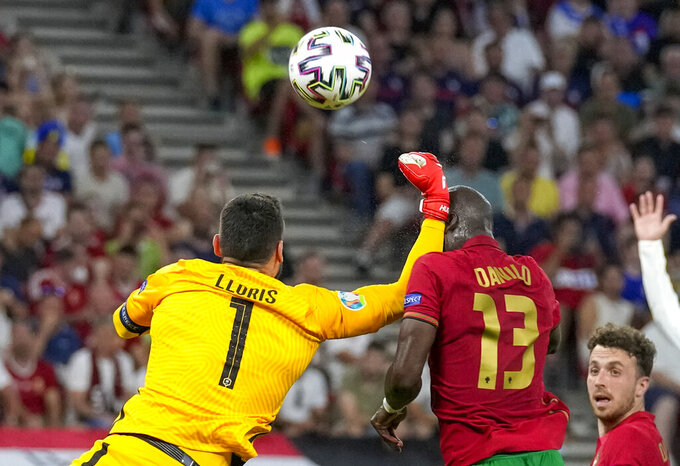 Portugal midfielder Danilo says he is doing fine after being hit in the face by France goalkeeper Hugo Lloris during a game at the European Championship.

Danilo says on his Instagram account “it was only a scare.” He thanked everyone for their messages and their concern.

Danilo was hit after Lloris came out to punch away a free kick in the 28th minute. Danilo needed treatment on the field before leaving with an ice pack on his face. He was substituted at halftime.

Portugal will play Belgium in the round of 16 on Sunday.

English pop star Ed Sheeran performed a socially-distanced acoustic set at England’s European Championship base at St. George’s Park as the team discovered its last-16 opponent would be Germany.

A BBQ and outdoor gig were being held by England as the final round of group matches was being played on Wednesday.

There was even a brief rendition of the England team’s “Three Lions” song with the lyrics “Football’s Coming Home.”

Danish health officials have urged soccer fans who attended the European Championship game between Denmark and Belgium on June 17 in Copenhagen to be checked for the coronavirus after they found at least three people who later tested positive for the delta variant.

The Danish health minister says about 4,000 people sat near those who have tested positive.

Denmark has reported 247 cases of the variant since April 2.

All those attending the final Euro 2020 game in Copenhagen on Monday must show valid documents that they are not infected with COVID-19 before they can enter Parken Stadium.

The first round of the European Championship is over and the first off day of the tournament has arrived.

Eight teams have been eliminated from Euro 2020 but 16 others are still in the mix and getting ready for the weekend.

Italy will face Austria in London and Wales will take on Denmark in Amsterdam on Saturday. Defending champion Portugal will face top-ranked Belgium in Seville and the Netherlands will play the Czech Republic in Budapest the following day.

It will be World Cup champion France against Switzerland in Bucharest and Spain against Croatia in Copenhagen on Monday. Then England will play Germany in London and Sweden will face Ukraine in Glasgow on Tuesday.