The Latest: Purdue receiver Rondale Moore opting back in 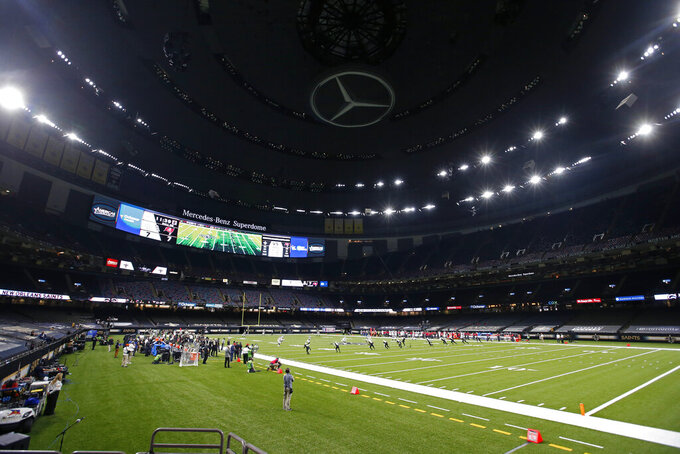 the New Orleans Saints and the Tampa Bay Buccaneers play in the Superdome without fans, due to the COVID-19 pandemic, in the first half of an NFL football game in New Orleans, Sunday, Sept. 13, 2020. (AP Photo/Butch Dill)

Purdue All-America receiver Rondale Moore is opting back in to the 2020 football season.

Moore announced in early August that he was opting out and would concentrate on preparing for the NFL draft. His decision came before the Big Ten postponed its fall football season, but there was speculation at that time the conference could be heading into that direction because of concerns about playing through the pandemic.

The Big Ten announced last week that it would stage a fall football season, starting the weekend of Oct. 24. The Big Ten has pledged to daily COVID-19 testing for its athletes.

Moore, a possible first-round draft pick who missed much of last season due to a knee injury, decided to rejoin the Boilermakers for his junior year. As a freshman, Moore had 114 catches for 1,258 yards and 12 touchdowns. He also ran for 213 yards and two scores. Last year he was limited to just four games.

The New Orleans Saints say they’ll admit about 750 family members of players, coaches and other staff to Sunday night’s game against Green Bay in the Superdome.

All of those attending the game, which will be otherwise held without fans, will sit along the sideline behind the Saints’ bench in what club is labeling a “strict test” of its health and safety protocols for future games.

The club says Louisiana Gov. John Bel Edwards and New Orleans Mayor Latoya Cantrell have approved of the plan to test protocols being developed with local, state and national officials as well as health experts and Superdome management.

The Saints say protocols include health screenings, mobile ticketing, social distancing and the wearing of face masks for all attending.

North Carolina State has announced temporary salary cuts or furloughs for coaches and staff members because of financial concerns amid the pandemic.

The school announced the measures Thursday, citing expected losses of $25 million to $35 million in projected revenue.

Those measures will run Oct. 24 through June 30 to end the fiscal year.

“These are uncomfortable and very difficult decisions and I fully understand that actions taken will have a significant impact on individuals and families,” Corrigan said.