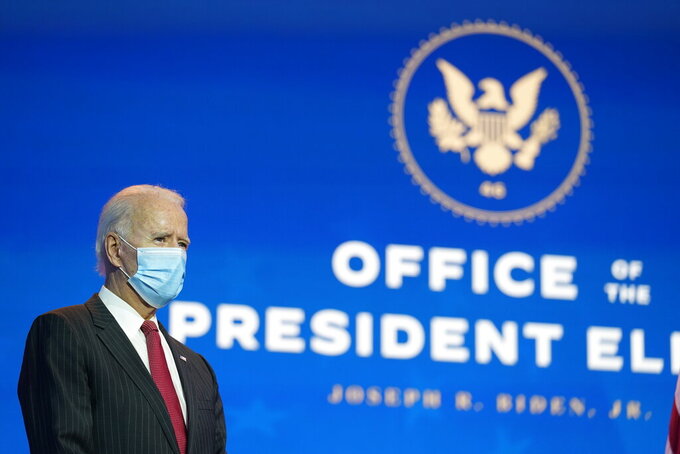 Sen. Mitt Romney, R-Utah, one of Trump’s most vocal GOP critics, tweeted Thursday, “It is difficult to imagine a worse, more undemocratic action by a sitting American President.”

Romney accused Trump on resorting to “overt pressure on state and local officials to subvert the will of the people and overturn the election.”

Sasse tweeted: “Rudy and his buddies should not pressure electors to ignore their certification obligations under the statute. We are a nation of laws, not tweets.”

President-elect Joe Biden is meeting with governors and expressing concern that President Donald Trump's unprecedented attempt to block the peaceful transition of power at the White House has hindered the flow of information about programs to fast-track a coronavirus vaccine. Trump, meanwhile, is continuing to spread misinformation and sow doubt about a democratically held election he lost.

House Democrats are asking a Trump administration official for an immediate briefing to explain why she has not launched the transition process for President-elect Joe Biden.

Democrats say in a letter to General Services Administration head Emily Murphy that her refusal to begin transition activities required by law is having “grave effects.″ Those effects include “undermining the orderly transfer of power, impairing the incoming administration’s ability to respond to the coronavirus pandemic, hampering its ability to address our nation’s dire economic crisis, and endangering our national security,″ Democrats say.

The letter is signed by the chairs of the House Oversight and Appropriations committees. It requests an immediate briefing with Murphy to help lawmakers decide whether to call Murphy and other officials to testify at a public hearing.

Murphy has yet to certify Biden as the winner of the presidential election, stalling the process of officially launching the transition.

President-elect Joe Biden is denouncing President Donald Trump as the “most irresponsible president in American history” over his efforts to overturn the result of the election.

Biden was asked by a reporter Thursday about Trump extending a White House invitation to Michigan state lawmakers in an apparent bid to overturn the results of the election in the state, which Biden won.

Biden shook his head, noted that “there’s questions whether it’s even legal” and said the move was “outrageous.”

Biden added: “It’s hard to fathom how this man thinks.”

Speaking broadly about Trump’s refusal to concede the election, Biden said Americans are “witnessing incredible irresponsibility” and warned that “incredibly damaging messages are being sent to the rest of the world about how democracy functions.”

President-elect Joe Biden is ruling out the possibility of a national lockdown to address the coronavirus pandemic.

Speaking to reporters in Wilmington, Delaware, on Thursday, Biden said there will be “no national shutdown” when he’s in office because “every region, every area, every community can be different” and a blanket lockdown would be “counterproductive.”

Biden has faced questions about whether he’d pursue a nationwide shutdown to try to rein in the virus after one of the members of his coronavirus task force floated the possibility in an interview. But Biden and other members of the task force have said the proposal is not on the table and is not the best option to address the pandemic.

President-elect Joe Biden says he has decided whom to nominate as his secretary of the Treasury Department.

Biden said Thursday that the decision will be announced just before or after Thanksgiving and that “you’ll find it is someone who I think will be accepted by all elements of the Democratic Party, progressives through the moderate coalition.”

Biden spoke to reporters after participating in a video conference with a group of governors from both parties, telling them he wanted to be their partner in the White House. The governors talked about the need for government officials to be clear with Americans about what to expect as the virus surges. He says, “They all acknowledge this is going to take a massive education campaign.”

Biden’s treasury secretary would lead his economic team as many businesses and Americans struggle while the coronavirus pandemic continues.

President-elect Joe Biden says the Trump administration’s refusal to give his team access to key federal agencies is affecting their ability to create a plan to respond to the coronavirus pandemic, particularly around vaccine distribution.

Speaking in Wilmington, Delaware on Thursday, Biden referenced the refusal by the General Services Administration to name him the apparent winner of the election. The refusal has blocked Biden’s team from receiving federal funds allocated for the transition and barred his team from meeting with their counterparts to collect relevant information.

Biden says that his transition team doesn’t have “all the information that we need to get from all the various agencies,” and that, as a result, “we’re not able to deal with everything from testing to guidance to the all-important issue of vaccine distribution.”

Biden has launched his own working group focused on crafting an actionable plan to rein in the pandemic. But he and his aides have said a lack of access to the current planning in the federal government will make the response much more difficult when Biden does take office in January.

A Biden transition official confirms that Pelosi and Schumer are traveling to Wilmington to meet with the president-elect in person on Friday. The official wasn’t authorized to share internal planning and spoke to The Associated Press on condition of anonymity Thursday.

Biden spoke with the pair by phone last week about the intensifying pandemic and prospects for passage of a COVID-19 relief bill in the lame duck session of Congress. Biden has made addressing the virus his top priority as he moves forward with his transition.

The meeting comes as President Donald Trump continues to spread misinformation and sow doubt about an election that he lost to Biden. The Trump administration is blocking the Biden team from the official intelligence briefing traditionally afforded to incoming presidents and from collaborating with its coronavirus response team.