The Latest: S Korea fears infections getting out of control 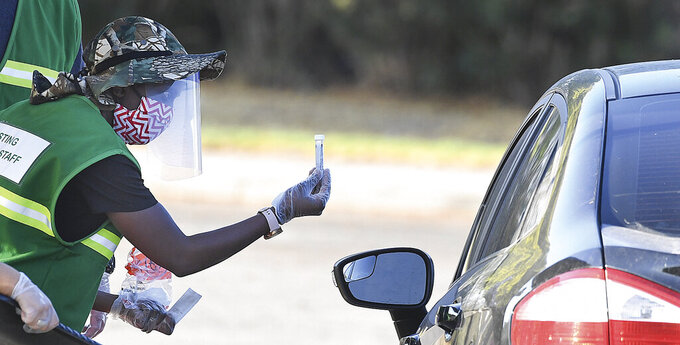 A volunteer shows the occupants of a car the step by step procedure for performing a COVID-19 nasal swab early Tuesday, Aug. 11, 2020 during the first day of a megablitz testing event presented by Yuma County, the City of Yuma and the Arizona Department of Emergency and Military Affairs in the parking lot of the Yuma Civic Center. The blitz is intended to offer up to 10,000 free COVID-19 drive-through tests to area residents. (Randy Hoeft/Yuma Sun via AP)

SEOUL, South Korea — New coronavirus cases in South Korea have reached the highest level in five months, and authorities fear infections are getting out of control in the Seoul region, which is home to half the country’s 51 million people.

Officials reported 166 newly confirmed cases Saturday. That was the highest since March 11, when South Korea reported 242 amid an outbreak in the southeastern city of Daegu and nearby towns.

With 103 new cases reported Friday, this is the first time since late March that the daily increase surpassed 100 two days in a row.

Officials say all but 11 of the new cases were local transmissions, and most were in the Seoul area.

— Canada-U.S. border closed for another month

— Rural families without internet face tough choice on school. Roughly 3 million students across the United States don’t have access to a home internet connection. For some, it is simply too expensive or there's no wi-fi.

— A federal judge threw out a lawsuit by an Arizona woman who claimed New York’s quarantine requirement for travelers from hotspot states infringed on her “fundamental right to travel.”

— NBA players at the Walt Disney World campus have been safe, with no players testing positive for the coronavirus since arriving in early July. Now some players whose teams missed the playoffs return home to virus hotspots.

Much of the reservation has been closed since March as the new coronavirus swept through.

The tribe released a plan this week that allows parks and marinas to reopen with safeguards. Businesses can operate at limited capacity.

Employees at tribal and national parks on the reservation say they will be busy this weekend preparing for tourists.

MELBOURNE, Australia — The Australian state of Victoria continues to flatten the curve in its wave of coronavirus infections and deaths.

The state on Saturday reported four more COVID-19 deaths and 303 newly confirmed cases in the previous 24 hours. It is the second-lowest daily figure reported in Victoria this month after 278 cases Thursday.

Victoria’s daily case numbers are gradually decreasing, with the seven-day average down to 344 from 521 a week ago.

But authorities warn there is more progress needed before lockdown restrictions in the city of Melbourne can be eased.

Melbourne residents and those in a nearby shire remain subject to strict night-time curfews, time limits on outdoor exercise, distance allowed from home, mandatory public mask wearing and shutdowns of non-essential industries.

MEXICO CITY — Mexico’s number of confirmed coronavirus cases has risen to 511,369, as health officials say they believe the country's infections have peaked.

Assistant Health Secretary Hugo López-Gatell says Mexico had reached its peak of infections over the last three weeks, saying that “we have now had a maximum point in the curve.”

However, he predicts that second waves of outbreaks will continue around the world for time. He says that “this is a phenomenon that is going to be with us in the whole world for several years.”

PARIS — Paris is expanding the areas of the city where pedestrians will be obliged to wear masks starting Saturday morning, with health officials saying the coronavirus is “active” in the French capital and the Mediterranean city of Marseille,

The Champs-Elysees Avenue and the area around the Louvre museum are among zones where masks will be mandatory.

Paris police checks ensuring respect for mask wearing in designated areas are to be reinforced. Bars and restaurants could be ordered closed if distancing and other barriers to virus transmission aren’t respected.

With France’s national figures on infections also rising, Britain late Thursday ordered a quarantine for people entering the United Kingdom from France. France responded Friday by saying it would do the same for travelers from Britain.

The Hawaii State Teachers Association filed a complaint with the state Labor Relations Board over a change in working conditions from increasing COVID-19 infections.

Most public schools will start the academic year Monday with online instruction. The union is asking that all schools be online until at least the end of the first quarter.

The union says some schools are going forward with in-person instruction. The state Department of Education disputes that statement. The union is asking teachers to wear black on Monday.

PHOENIX -- Arizona Gov. Doug Ducey’s office says unemployed residents of the state were expecting to receive an additional $400 a week under an executive order by President Donald Trump will get only $300 extra.

Friday’s announcement comes after the state decided it should not use its own funds to cover a required 25% match to the extra coronavirus payments.

Arizonans were getting $600 extra on top of the maximum $240 a week. But that extra pay expired in late July when Congress failed to extend it.

SPRINGFIELD, Ill. — The Illinois Department of Public Health is reporting 2,264 more people have tested positive for the coronavirus — the largest increase in confirmed cases in nearly three months and the third time the state has topped 2,000 daily cases in the last week.

The state health department also said Friday that 25 more people have died from the virus, raising Illinois’ death toll from the pandemic to 7,721.

The most confirmed cases reported in Illinois in a single day was 4,014 on May 12.

In a press release, the health department blamed the uptick in the number of virus cases on local elected officials of communities “where there is little public concern for consequences or enforcement” of social distancing and isolation orders. Officials say 14 of the state’s 102 counties were deemed at “warning level” for the resurgence.

FRESNO, Calif. -- Students at a private school in California have attended a second day of in-person classes despite state and county orders to close the school.

Immanuel Schools in Reedley was told on Thursday to close its classrooms until the county is removed from a state monitoring list for two weeks. Fresno County also issued a health order against the K-12 school, which has about 600 students.

But the school allowed students into classes Thursday and Friday without masks or social distancing. The school’s trustees and superintendent say they believe students’ development will suffer if they cannot be taught on campus.

LANSING, Mich. — Michigan Gov. Gretchen Whitmer says 4 million masks will be distributed to the state's residents at no charge to help combat the coronavirus pandemic.

The face coverings will go to low-income people, seniors, schools and homeless shelters through a partnership of the state, Federal Emergency Management Agency and Ford Motor Co.

FEMA is supplying 2.5 million of the masks, including 1.5 million that the state has already sent to social service agencies. Ford is paying for 1.5 million masks, which combined with an additional 1 million from FEMA will go to low-income schools, the city of Detroit, health clinics for the poor, some virus testing sites and other places.

The governor has required that masks be worn in enclosed public spaces and also in outdoor public areas whenever consistent distancing is not possible.

LOS ANGELES — California is withering under a heat wave that has brought dangerously high temperatures, increased wildfire danger and fears of coronavirus spread as people flock to beaches and recreation areas.

Health officers were worried that people will pack beaches, lakes and other recreation areas without following mask and social distancing orders — a major concern in a state that has seen more than 600,000 coronavirus cases.

Dr. George Rutherford, an epidemiologist at the University of California, San Francisco, told the San Francisco Chronicle that Israel saw a COVID-19 resurgence after a May heat wave inspired school officials to let children remove their masks.

“People will want to take off their masks when it’s hot,” Rutherford said. “Don’t do it.”

CHAPEL HILL, N.C. — A pair of COVID-19 clusters has been discovered at separate dormitories at the University of North Carolina at Chapel Hill.

An alert sent out by the school on Friday said the clusters were confirmed in Ehringhaus Community on the south end of campus and Granville Towers, which is on the west side of campus and adjacent to downtown Chapel Hill.

According to the school, the people in the clusters have been identified and are isolating and receiving medical monitoring. The school says it has also notified the Orange County Health Department and is working with the agency to identify possible potential exposures.

GAINESVILLE, Fla. — Florida’s high school athletic board has voted to begin practices for football and other fall sports Aug. 24 and games less than two weeks later. The decision pushes aside the advice of medical experts who said competition shouldn’t resume for at least six weeks because of the coronavirus outbreak.

The Florida High School Athletic Association board voted 11-5 on Friday to begin practices this month, though some counties with major outbreaks might choose to delay their seasons and forgo participation in the statewide playoffs.

Football games and other competitions could start Sept. 4, but the 67 countywide school districts plus private schools will have until Sept. 18 to resume if they want to participate in the playoffs. Other fall sports affected are swimming and diving, cross country, golf, bowling and girl’s volleyball.

The association’s vote pushed aside the recommendation of its medical advisory board, which called for not resuming sports until Sept. 28 at the earliest. No county meets all the criteria the board recommended for the resumption of sports.

The decision comes as Florida reported more than 6,200 new coronavirus cases and 200 deaths on Friday. Over the past week, Florida has averaged 175 reported coronavirus deaths per day — only Texas was higher with 212.

OAKLAND, Calif. — A judge has ordered a McDonald’s restaurant in California that was hit by a coronavirus outbreak to follow increased health and safety protocols to help stop the spread of the virus.

The San Francisco Chronicle reports an Alameda County judge issued a preliminary injunction on Thursday against the owners of the McDonald’s in Oakland. Workers said the outbreak there infected 35 people.

The judge ordered them to provide employees masks and gloves. It also required them to send home workers who show symptoms of infection.

After being closed for weeks, the McDonald’s franchise reopened in July after agreeing to requirements in a temporary restraining order.

Coronavirus-related hospitalizations in Arizona peaked about a month ago. The latest hospitalization metrics posted by the Department of Health Services are trending down to mid-June levels.

MONTGOMERY, Ala. — Alabama health officials are encouraged by a decline in coronavirus cases a month after a statewide mask order.

Harris encouraged people to keep wearing masks. He says the numbers may be declining because the surge of cases after the July 4 holiday has ended and the statewide mask order in July “played a role” in lowering the numbers.

Dr. Don Williamson, the former state health officer who heads the Alabama Hospital Association, says the next concern is a possible spike when students return to schools and colleges and gather for the Labor Day weekend.

Williamson says while the number of coronavirus patients in hospitals has dropped, 89% of ICU beds are full.

WINDOW ROCK, Ariz. — Navajo Nation President Jonathan Nez is urging all schools on the tribe’s reservation to use online learning during the fall semester to help reduce the risk of spreading the coronavirus.

Nez’s statement cited all public and private schools, including charter schools, schools operated by the federal Bureau of Indian Affairs and those controlled by the tribe.

More than 9,300 confirmed coronavirus cases have been reported on the reservation, which includes parts of Arizona, New Mexico and Utah.