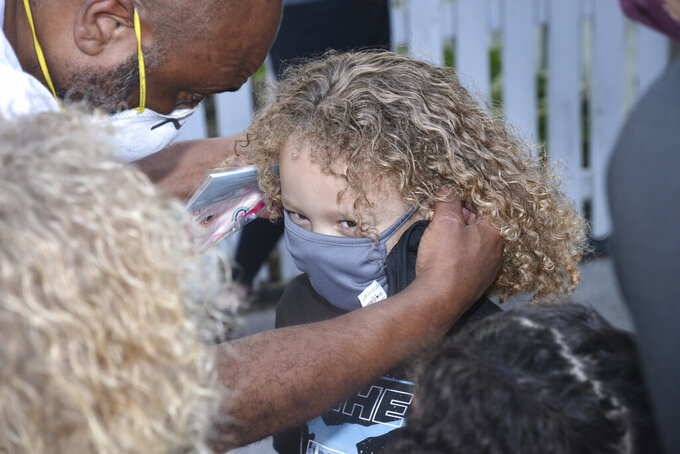 SEOUL, South Korea — South Korea has reported 113 newly confirmed cases of COVID-19 over the past 24 hours — its first daily jump above 100 in nearly four months.

But the rise was expected as health authorities had forecast a temporary spike driven by imported infections found among cargo-ship crews and hundreds of South Korean construction workers flown out of virus-ravaged Iraq.

The figures released Saturday by South Korea’s Centers for Disease Control and Prevention brought the national caseload to 14,092, including 298 deaths.

The agency says 86 of the new cases are linked to international arrivals, while the other 27 involved local transmissions. It says the imported cases include 36 South Korean workers who returned from Iraq and 32 crew members of a Russia-flagged cargo ship docked in the southern port of Busan.

— Enhanced federal aid for millions of unemployed Americans is set to expire.

— Dr. Birx: Must slow virus surge in south so it doesn’t head to northern states

— More students are frustrated by college plans to keep housing payments, even if the campuses must shut down again and go online in the fall.

— Nearly half of Americans whose families experienced a layoff during the coronavirus pandemic now believe those jobs are lost. That’s according to a new poll from The Associated Press- NORC Center for Public Affairs Research.

— South Korea will allow baseball fans to return to the stands beginning Sunday and soccer fans can return Aug. 1. The teams can fill only 10% of the seats. Fans will be screened for fevers and must wear masks.

NEW ORLEANS — New Orleans’ mayor is shutting down the city’s bars because of rising coronavirus numbers and is also forbidding restaurants to sell alcoholic drinks to go.

Mayor LaToya Cantrell said Friday that some lines of people waiting to buy drinks were so long they became “a gathering in themselves, and no mask-wearing and the like.”

Cantrell says the city is seeing daily increases in confirmed coronavirus cases about double its threshold of 50 a day for more relaxed rules. The rule against take-out sales of alcoholic drinks takes effect at 6 a.m. Saturday.

JACKSON, Miss. — Mississippi’s governor is setting new restrictions on bars and social gatherings to curb the spread of the coronavirus among a group that he describes as “young, drunk, careless folks.”

Gov. Tate Reeves said Friday that coronavirus infections have been rising steadily in people in their 20s who are not being responsible under the current regulations.

Bars and restaurants in the state have been able to open if they use only 50% of their capacity. Under the new rules, they also must require that customers be seated to order alcohol and alcohol sales will end at 11 p.m.

The governor says that “our bars must look more like restaurants and less like mobs of COVID-19 spread.”

INDIANAPOLIS -- The Indianapolis Symphony Orchestra has canceled its 2020-21 indoor season due to the coronavirus outbreak and “unforeseen economic pressures.”

Orchestra management and the Orchestra Committee that represents musicians released a joint statement announcing the cancellation.

It says management and musicians are is “committed to collaboratively exploring creative ways to continue to connect with our patrons and return to performing if conditions allow.”

The statement didn’t elaborate on the ”unforeseen economic pressures.”

CAIRO — A humanitarian group says 97 medical workers in Yemen have died of the coronavirus, the first reliable estimate to give a glimpse into the pandemic’s impact on the devastated health sector in the war-torn country.

The report by MedGlobal elies on accounts from Yemeni doctors tracking the deaths of colleagues to gauge the toll of the virus. The 97 dead include infectious disease experts, medical directors, midwives and pharmacists.

Even before the pandemic Yemen had just 10 doctors for every 10,000 people. The country’s health system is in shambles after five years of war that has spawned the world’s worst humanitarian crisis. Half of its medical facilities are dysfunctional.

HONOLULU -- The first hurricane to threaten the United States since the start of the coronavirus pandemic is presenting new challenges for Hawaii, even though officials there are long accustomed to tropical storms.

But Honolulu authorities are having to prepare extra shelter space so people can maintain physical distance from others.

Evacuees at Honolulu shelters also will have their temperatures taken. Those with high temperatures or with a travel or exposure history will either be isolated at that shelter or taken to a different site.

Officials are reminding people to make sure they have masks and hand sanitizers in their emergency supply kits.

PORTLAND, Ore. -- Health officials in Oregon say nine more people have died from COVID-19 — the highest number of deaths reported in one day in the state since the pandemic began.

The Oregon Health Authority said Friday the newly recorded deaths raise the state’s toll for the pandemic to 282.

The authority also said there were 396 new confirmed or suspected cases of COVID-19, bringing Oregon's case total to more than 16,100.

LOS ANGELES — California prosecutors have charged two brothers in an alleged assault of Target security guards during a brawl in May after they refused to wear face masks because of the coronavirus pandemic.

The Los Angeles city attorney said Friday that Phillip and Paul Hamilton refused to wear masks at the Target store in Van Nuys and started a melee as they were being escorted out. One of the security guards suffered a broken arm.

It was not immediately clear if the brothers had attorneys who could speak on their behalf.

MONTPELIER, Vt. -- Vermont Gov. Phil Scott issued an order requiring people in the state to wear masks in public to reduce the spread of the coronavirus.

Scott says outbreaks hitting the South and West may be spreading back toward the Northeast and Vermont.

The Republican governor says, “We are still in very good shape, but it is time to prepare.” He notes it’s better to take precautions than having to roll back the reopening.

All public and private businesses must display signs saying masks are required for anyone over age 2. Businesses can refuse service to people not wearing a mask. The order that takes effect Aug. 1.

PESHAWAR, Pakistan — A 103-year-old Pakistani man has recovered from the coronavirus, making him one of the world’s oldest survivors of the newest virus.

Aziz Abdul Alim was tested positive this month and was discharged last week from a hospital, which was set up in May by a non-governmental organization in the northern town of Chitral.

Alim says Friday he never lost hope during the illness, although he felt high-grade fever, cough and pain in his body.

His recovery comes amid a steady decline in COVID-19 deaths and infections in the country. Pakistan has reported more than 270,000 confirmed infections and 5,763 deaths.

SAO PAOLO — Sao Paulo Mayor Bruno Covas says next year’s Carnival festivities in February have been canceled due to the coronavirus pandemic.

Covas says samba schools that take part in the yearly parade and organizers of street parties have agreed to discuss a new date for the four-day extravaganza, possibly between May and June.

The country’s total as increased to 421,996. More than 6,300 people have died in the pandemic in South Africa, which makes up more than half the recorded cases on the African continent.

President Cyril Ramaphosa said Thursday that schools would “take a break” for a month to protect children from the surging infections. Businesses are feeling the financial impact. There were protests by hospitality and restaurant workers this week, calling for more loosening of lockdown restrictions.

The state Senate’s Republican leader praised Holcomb’s decision to eliminate the possible misdemeanor offense, which could have carried penalties of up to $1,000 in fines and a maximum 180 days in jail.

Holcomb, a Republican, said Wednesday in announcing the mask requirement that violators could face a misdemeanor charge, while adding the “mask police will not be patrolling Hoosier streets.”

The executive order on the mask mandate describes it as a step to protect health during the coronavirus outbreak and help ensure businesses and schools can be open.

Hospitalizations for the virus have dropped significantly in the past two weeks, with 2,844 people being treated as of Thursday. That’s down from the July 13 peak of 3,517 people.

BOISE, Idaho — An Idaho federal judge has held a pair of rare outdoor court proceedings to swear in new U.S. citizens amid the coronavirus pandemic.

The Idaho Press reports that U.S. Magistrate Judge Candy Dale swore in 20 people last week and 37 people Thursday on a patio outside the James D. McClure U.S. Courthouse and Federal Building in Boise.

Without the ceremonies, the people approved for citizenship would have to wait months to become U.S. citizens because in-person court gatherings have been halted to limit the spread of COVID-19. Clerk Steve Kenyon proposed the idea after seeing a photo of an outdoor proceeding during the Spanish flu pandemic.

The Minnesota Department of Health reported 773 new cases Friday, continuing a trend in increasing cases in recent weeks, and five deaths. Hospitalizations have been rising slowly.

The COVID-19 Response Assistance Field Team was sent to Minnesota by Health and Human Services Secretary Alex Azar. It arrived this week and the recommendations will be released later Friday.

White House coronavirus task force leader Dr. Deborah Birx identified Minneapolis as one of 11 cities with a surge in coronavirus cases that needs aggressive action. The city’s positive infection rate is higher than the state overall, which city health officials said is due to young people frequenting bars, essential workers infected while working and larger households in smaller homes.

The statewide total of confirmed coronavirus cases stands at 48,488 and 1,566 deaths.

PARIS — French Prime Minister Jean Castex says travelers to France from 16 countries where the coronavirus is strong must undergo compulsory tests on arrival at French airports or ports.

That’s unless they can present a negative test within 72 hours from their countries of departure. Those testing positive on arrival must isolate for 14 days, the prime minister said during a visit to Paris’ Charles de Gaulle airport. The plan will start on Aug. 1.

France is nervous about signs that the coronavirus is spreading as vacation season moves into full swing. Health authorities say cases on mainland France have surged by 66 percent in the past three weeks.

Besides the U.S., other countries on the list cover much of the globe -- from the Middle East, including Israel, the United Arab Emirates and Qatar, South Africa and Brazil and Peru in Latin America.

Birx told NBC’s “Today” show: “We have to change our behavior now before this virus completely moves back up through the north.”

The densely packed New York metropolitan area had been the hardest-hit section of the country, but the daily number of cases and deaths declined after a strict lockdown. The number of cases has been growing in southern states, including South Carolina, Georgia and Florida, where hospital officials say they desperately need medication to treat the patients filling up beds.

Birx says it’s difficult for people to understand “how deeply you have to clamp down” with social distancing, hand washing, mask wearing and avoiding crowds to stem the spread of the deadly virus. Birx says that’s why health professionals have “called out the next set of cities” where they see early warning signs. If those cities make changes now, they “won’t become a Phoenix.”

Arizona’s Maricopa County, which includes Phoenix, has more than 100,000 confirmed cases and more than 1,600 deaths.