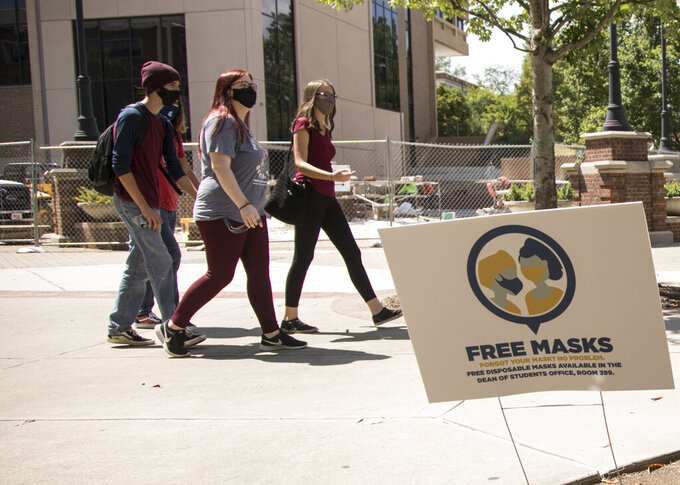 Students wear masks as they walk through campus at UTC on Monday, Aug. 17, 2020 in Chattanooga, Tenn. Monday was UTC's first day of classes in person classes since March, when all University of Tennessee schools moved to virtual classes in an effort to stop the spread of COVID-19. (Troy Stolt /Chattanooga Times Free Press via AP)

SEOUL, South Korea — South Korea is banning large gatherings, shutting nightspots and churches and removing fans from professional sports nationwide in an attempt to slow a resurgence of coronavirus infections.

Most of the new cases were in the Seoul metropolitan area, which has been at the center of the viral surge of recent weeks. But infections were also reported in practically every major city and in towns across the country.

The government had already imposed the tighter restrictions in the capital region earlier this week, a move they resisted for months out of economic concerns. Park said it has become inevitable to expand the same measures nationwide with the virus spreading more broadly.

— Several aging U.S. veterans will gather in Pearl Harbor next month to mark the 75th anniversary of Japan’s surrender, despite the coronavirus pandemic

— University of Wyoming reports 61 cases of the coronavirus

— A U.S. count of deaths from all causes during the seven-month period yields what experts believe is a fuller — and more alarming — picture of the disaster and its racial dimensions.

— Major League Baseball has postponed this weekend’s Subway Series to allow time for more testing and contact tracing after two members of the New York Mets tested positive for the coronavirus.

BEIJING — Health officials in China say in their Saturday report on the coronavirus that the country had no locally transmitted infections in the latest 24-hour period, though 22 cases were confirmed in Chinese arriving from abroad.

While the local spread of the virus appears to have been contained in mainland China, the semi-autonomous southern city of Hong Kong continues to struggle with its worst outbreak since the pandemic began.

Hong Kong leader Carrie Lam said Friday that free coronavirus tests will be offered to residents during the first two weeks of September, in hopes of restarting the heavily services-dependent local economy.

A new surge in infections that started in July has more than tripled the number of cases in Hong Kong to 4,632, with a total of 75 deaths.

WASHINGTON — Democratic presidential nominee Joe Biden says he would do whatever was needed to keep the country safe amid the coronavirus pandemic even if that meant shutting down the country.

Biden made the comment in an interview with ABC. The interview airs Sunday night, but clips were provided Friday.

Biden says, “I will be prepared to do whatever it takes to save lives because we cannot get the country moving until we control the virus.” He adds that if scientists recommended shutting down the country, “I would shut it down.”

President Donald Trump is encouraging schools to reopen and people to get back to work. The U.S. has had more than 5.5 million confirmed coronavirus cases, with more than 175,000 deaths.

SALEM, Ore. — Oregon public health experts say the number of new coronavirus cases in the state has dropped over the past month, but the decline hasn’t been enough for schools to safely open.

The state is averaging about 250 new cases a day, and health officials say that needs to drop to about 60 for schools to reopen.

Gov. Kate Brown said Friday that residents will have to continue to follow and enforce current statewide pandemic mandates or else bars and restaurants may have to close and travel restrictions will be implemented.

Brown says at the current rate, schools won’t be able to reopen until April.

But housing advocates contend it falls far short of what is needed to help as many as 130,000 households estimated to face possible eviction between now and Dec. 31 because of the pandemic. In comparison, there were about 20,000 eviction filings in all of 2019.

Lamont said he also will soon sign an executive order extending the moratorium on residential evictions until Oct. 1.

OLYMPIA, Wash. — Washington Gov. Jay Inslee is asking Canada for help with U.S. residents of a small peninsula who have been marooned by the pandemic-related closure of the U.S.-Canada border.

Point Roberts is part of Washington state, but it juts out from the Canadian mainland south of Vancouver and is not connected to the rest of Washington. About 1,300 people live there.

In a letter Friday to Canadian Prime Minister Justin Trudeau, Inslee suggests that residents of Point Roberts be given special travel permits allowing them to drive directly to and from the Washington state mainland.

HARRISBURG, Pa. — The governing body for Pennsylvania interscholastic sports decided Friday to move forward with the fall season, rejecting the governor’s recommendation that all youth sports be postponed until 2021 to help stop the spread of the coronavirus.

The board of the Pennsylvania Interscholastic Athletic Association had delayed the start of fall sports by two weeks after Gov. Tom Wolf on Aug. 6 urged that scholastic and recreational youth sports be put off until January, citing the pandemic.

The PIAA had said it was blindsided and “tremendously disappointed” by Wolf’s recommendation — which was not binding — and insisted that fall sports could be held safely. For his part, Wolf has pointed out that major collegiate leagues have independently canceled fall sports.

The board voted 25-5 on Friday to allow high school football, soccer, tennis, field hockey and other fall sports to go on as planned, starting Monday. Among those voting no: board members representing professional associations of school boards, superintendents and principals.

SALT LAKE CITY — The annual Christmas concert by The Church of Jesus Christ of Latter-day Saints’ choir has been cancelled because of lingering concerns about the coronavirus pandemic.

The cancellation of the Tabernacle Choir at Temple Square’s holiday concert announced Friday by church officials is the latest sign that disruptions to normal religious activity will continue through the holidays. The Utah-based faith previously announced it would hold its twice-yearly signature conference in October without in-person audience as it did at the April conference.

LITTLE ROCK, Ark. — Arkansas on Friday reported its largest single-day increase in deaths from the illness caused by the coronavirus as the state moved closer toward resuming in-person classes at public schools.

The spike in deaths comes days before Arkansas’ public schools are scheduled to reopen. Schools are allowed to offer virtual classes or a hybrid option that includes some onsite classes, but the state is requiring schools to be open five days a week for students who need in-person instruction.

BLOOMINGTON, Ind. — The size of private gatherings in Bloomington is now limited to 15 people under an emergency executive order by Mayor John Hamilton. The order took effect immediately Friday. The previous maximum crowd size was 50.

Hamilton issued the order after photos and videos shared on social media showed Indiana University students gathering in large groups without masks or practicing social distancing. Hamilton urged residents to report any violations of the new order to the Bloomington Police Department.

Des Moines Public Schools, which has 32,000 students and 5,000 employees, blasted the decision by Republican Gov. Kim Reynolds’ administration to deny its request for a waiver to allow for 100% online learning. The district announced that it would file a lawsuit to challenge the state’s order to reopen schools, a prospect that it said was simply unsafe because of the coronavirus threat.

“Unfortunately, the governor and her agencies have decided to ignore the local decision-making authority set out in the law to try and force their will on school districts to do things we all know are simply not safe at this time,” said Kyrstin Delagardelle, the chair of the school board.

The Iowa Department of Education denied the district’s waiver request on Thursday. The agency said the denial would still allow parents to choose 100% virtual learning for students, and the district could offer a hybrid approach in which students get 50% in-person learning and the rest online.

DETROIT — Educators in Detroit concerned about exposure to the COVID-19 virus in classrooms and hallways have given their union the OK to call a “potential safety strike” in which teachers would agree to teach and work remotely.

The Detroit Federation of Teachers insists the strike would not be a work stoppage with the start of the school year looming, and said the aim is to press the public school district to implement science-based safety protocols during the coronavirus pandemic. Classes in Detroit are scheduled to start Sept 8.

Friday is the deadline for parents to complete a survey on whether they want online or face-to-face learning for the first quarter. A district spokeswoman says teachers also can choose face-to-face or online instruction.

PHOENIX — Arizona has reported a 20% increase in deaths in the first seven months of this year.

Public health experts say not all have been directly linked to the coronavirus. They say possible explanations include overdoses and suicides by those struggling with isolation or unemployment during the pandemic.

Other possibilities are patients succumbing to chronic diseases after postponing hospital visits because of fears about contracting the virus there. Or deaths from Arizona’s regular flu season in October to April.

TOPEKA, Kan. — The largest school district in Kansas moved classes online for its middle and high-schoolers while public health officials in Topeka imposed stricter crowd size limits to stem the spread of the coronavirus.

The Wichita school district, with more than 50,000 students, will give the parents of elementary students the option of taking classes in person or online. But older students will be online only when classes begin Sept. 8, the district’s board of education decided Thursday in a 5-2 vote.

The district also is the latest to cancel sports and extracurricular activities. Wyandotte County called off football, volleyball and soccer, as well as marching band, last week. And the Shawnee Mission School District, which is the state’s third largest with 27,000 students, decided to suspend sports and extracurricular activities starting Friday.

OKLAHOMA CITY — The Oklahoma State Department of Health reported an increase of 1,077 coronavirus cases and six deaths in the last 24 hours.

Also, the health department and the state Department of Education announced Friday a plan that provides public school teachers and school support staff with free coronavirus testing in their areas.

Gov. Kevin Stitt in July issued an executive order for the state health and education departments to develop a plan for teachers to be tested monthly for the virus.