The Latest: Santa Anita to reopen with limited capacity 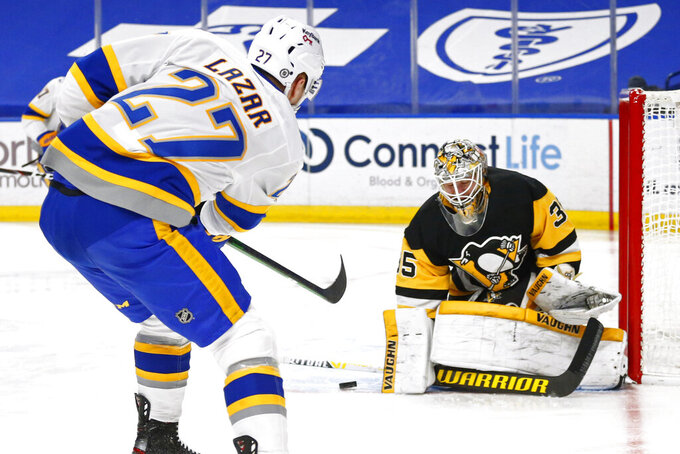 Santa Anita will reopen to the public at limited capacity next month in time for the Santa Anita Derby, the West Coast’s major prep for the Kentucky Derby.

Fans must purchase tickets for an assigned seat in advance. Walk-up or general admission tickets cannot be sold, though that could change as COVID-19 numbers improve in Los Angeles County.

Fans will be required to wear masks and maintain social distancing.

The county has dropped into the red tier for COVID-19, and the state is allowing limited capacity for large sporting event venues.

The Buffalo Sabres’ home game against the Boston Bruins will go on as scheduled “as of now.”

The teams issued the same announcement Thursday based on the results of COVID-19 tests and contact tracing.

The Denver Nuggets of the NBA and the Colorado Avalanche of the NHL will allow up to 4,050 fans into Ball Arena starting April 2.

Kroenke Sports & Entertainment announced Thursday it received a capacity variance approval from the Colorado Department of Health and Environment. The total amount of fans is about 22% of the venue’s overall capacity.

KSE said a Nuggets game on March 30 and an Avalanche contest on March 31 will allow frontline staff, health care providers and first responders. The first game for ticketed fans will be when the Avalanche host the St. Louis Blues on April 2.

In a statement, KSE chairman and owner Stan Kroenke said the team is “thrilled” to welcome fans back and called it a “major first step" in the quest to have a fully packed arena again.

The status of the Sabres-Bruins game in Buffalo on Thursday night is uncertain after both teams placed personnel in the NHL’s COVID-19 protocol.

The development comes a day after the Sabres fired coach Ralph Krueger, and the practice was supposed to be the first under interim coach Don Granato. Buffalo is in a 0-10-2 slump, matching the third worst in team history. The Sabres have been off since a 3-2 loss at New Jersey on Tuesday night.

The Sabres’ scheduled paused for two weeks at the beginning of February after seven players and Krueger were placed in the protocol.

The game Thursday night is supposed to be Buffalo’s first this season with a limited number of fans. The team invited 700 local front-line workers, who will be honored as part of the team’s “Hockey Fights Cancer Night.”