The Latest: Sharks back at practice, play Sat night vs Blues 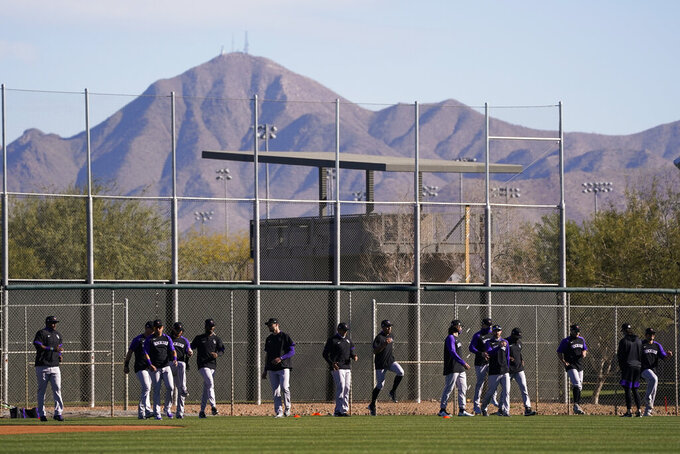 The San Jose Sharks have returned to practice and are set to play the St. Louis Blues as scheduled on Saturday night after having one game postponed because a player tested positive for the coronavirus.

Tomas Hertl was placed on the COVID-19 list on Wednesday, leading to the team canceling practice that day and postponing Thursday’s game against Vegas.

With no other players or staff testing positive since then, the Sharks were allowed to return to practice Friday and will host St. Louis the next night.

Coach Bob Boughner says Hertl is feeling well and has reported no symptoms but he will miss at least two weeks because of protocols.

The Atlantic Coast Conference will expand use of KINEXON SafeTag contact tracing devices by equipping players, coaches and Tier 1 personnel for its upcoming men’s and women’s basketball tournaments.

SafeTags measure proximity between users to provide school medical officials with contact tracing data when an individual tests positive for COVID-19. All 15 ACC schools used the devices inside team facilities during the regular season to mitigate the spread of the virus. Athletes also had the tags sewn into jerseys or tucked into socks during games.

An ACC release stated that the technology identified several high-risk close contacts of a positive case within the league. They were quarantined and later tested positive, limiting the spread of the virus.

The Colorado Rockies say they’ve been approved to allow 12,500 fans per game at Coors Field this season.

The Colorado Department of Public Health and Environment agreed to the club’s request to allow fans back into the stands. The 12,500 figure amounts to 25% of the stadium seating capacity.

The Rockies said the club and the state health officials will continue monitoring the pandemic “with the hope of safety adding to the capacity number in the future.”

Indianapolis will relax coronavirus restrictions on the city’s bars and restaurants starting next week ahead of the upcoming Big Ten and NCAA men’s basketball tournaments.

The changes will allow bars to operate at 50% capacity instead of 25% starting Monday, while restaurants will see their indoor restaurant capacity increase from 50% to 75%. Bars, restaurants and music venues will also be able to close two hours later, at 2 a.m., instead of at midnight.

Mayor Joe Hogsett says the capacity and time changes were prompted by drops in the city’s COVID-19 cases and its coronavirus positivity rate, and not due to the upcoming Big Ten and NCAA men’s basketball tournaments.

“I want to make it clear though that these decisions were in no way driven by March Madness,” Hogsett said.