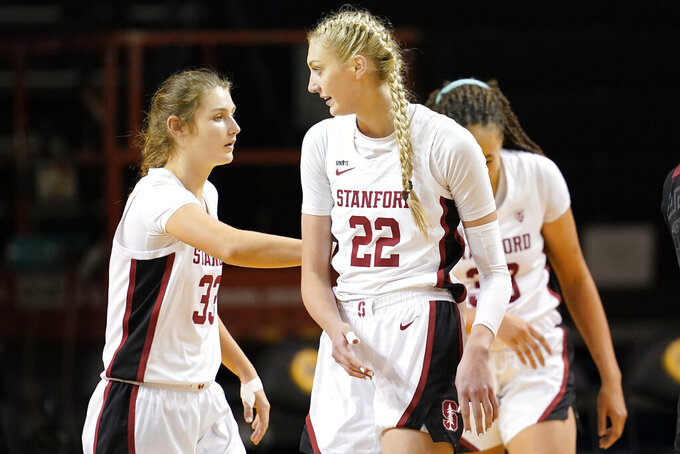 Stanford's athletic teams are able to return to campus after Santa Clara County lifted the restrictions on contact sports because of the coronavirus.

Stanford’s men’s and women’s basketball teams have been playing home games in Santa Cruz because of the ban that has been in place all season and was lifted earlier this week.

The sixth-ranked Cardinal women’s team left Tuesday for three games in Washington and will return to Maples Pavilion on Feb. 5 against Colorado.

The men’s team will travel to Arizona on Wednesday and will play its first home game Feb. 7 against California.

Athletes must adhere to strict safety protocols that include three tests a week and forming teammate-only households. Any athlete who travels more than 150 miles outside the county will be required to remain at their home or team’s facilities except when seeking medical care or other emergency services.

Arizona’s women’s basketball team has postponed games against No. 5 UCLA and Southern California this weekend due to COVID-19 protocols within the Wildcats’ program.

The 10th-ranked Wildcats were slated to play the Trojans on Friday and the Bruins on Sunday in Southern California.

Arizona also had its game against Colorado last Sunday postponed.

The schools will work with the Pac-12 conference to reschedule the games.

Oregon has suspended its men’s basketball program again because of coronavirus protocols, forcing the postponement of three games in Los Angeles.

The Ducks were set to play at UCLA on Thursday and Southern California on Saturday, and then make up a previously postponed game against the Bruins on Monday.

Oregon’s home games against Arizona State and Arizona earlier this month were also postponed because of virus protocols.

The NHL’s Vegas Golden Knights are playing their home game against the St. Louis Blues without coach Peter DeBoer or any of his assistants behind the bench.

The team says the coaching staff is isolating “out of an abundance of caution” and that general manager Kelly McCrimmon would take over. He’s expected to be helped by members of the American Hockey League Henderson Silver Knights coaching staff.

The Colgate men’s basketball games this weekend at Army have been postponed due to a positive COVID-19 test result within Army’s Tier 1 personnel.

The news for the Raiders comes on the heels of last weekend’s postponements of games against Bucknell after positive COVID-19 tests came back for two students associated with the Bison men’s and women’s basketball teams. Those results were later changed to negative after the laboratory that conducted the testing found an error in recording.

The games with Army will be rescheduled following discussions with the two schools and the Patriot League office.

The Raiders are scheduled to return to action on Saturday, Feb. 6, for a two-game home series against Boston University.

The Tennessee Tech men’s basketball team has its first schedule change of the season because of COVID-19 issues.

The Golden Eagles have postponed Thursday night’s home game because of COVID-19 protocols with Eastern Kentucky. The game has been rescheduled for Feb. 15.

Michigan State is planning to resume competing later this week after postponing three straight games due to a COVID-19 outbreak within the men’s basketball program.

Coach Tom Izzo says the Spartans (8-4, 2-4 Big Ten) are planning to play at Rutgers (8-6, 4-6) on Thursday night. He expects shooting guard Joshua Langford and center Mady Sissoko to be cleared to play the Scarlet Knights after both tested positive for the coronavirus earlier this month.

Izzo says Gabe Brown and an assistant coach recently tested positive, adding the junior shooting guard will be out of the lineup until early February.

The Spartans had postponed games at No. 4 Iowa and at home against Indiana and No. 22 Illinois. Since starting daily testing in the fall, Izzo said only “a couple” of players in the program have avoided testing positive for COVID-19.

Nearly 955,000 tests have been given to players and personnel since testing started at the beginning of August, and so far 262 players and 462 other personnel have been confirmed positive.

Individuals who test positive for COVID-19 follow the protocol established by the league and the players' association. They are immediately isolated, are not permitted access to club facilities, and can’t have direct contact with anyone affiliated with the team.

Club medical staff are in regular communication with individuals who test positive to monitor symptoms.

Carolina Hurricanes captain Jordan Staal is back at practice after testing positive for COVID-19.

Staal said Tuesday he feels good now after having some chills and coughing. He was the first of six Hurricanes players that ultimately appeared on the league’s daily COVID-19 unavailability list, which ultimately led to the postponement of three games.

The Hurricanes are currently scheduled to return to the ice Thursday against Tampa Bay. Staal was still listed on the league’s COVID-19 list as of Monday along with Jesper Fast, Warren Foegele, Jordan Martinook, Jaccob Slavin and Teuvo Teravainen.

Staal said he was “the first guy to test positive” and said he was “as surprised as anyone else – really in shock” after finding out. He said he was trying to be safe and follow health protocols before testing positive.