The Latest: Tennis courts, golf courses to reopen in England 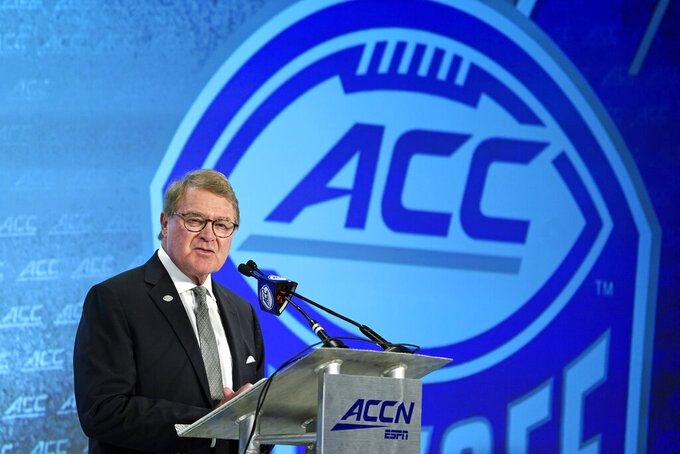 FILE - In this July 17, 2019, fil photo, Commissioner John Swofford speaks during the Atlantic Coast Conference NCAA college football media day in Charlotte, N.C. There are 130 major college football teams, spread across 41 states and competing in 10 conferences, save for a handful of independents. The goal is to have all those teams start the upcoming season at the same time — whether that's around Labor Day as scheduled or later — and play the same number of games. (AP Photo/Chuck Burton, File)

The British government says tennis courts and golf courses in England can reopen from Wednesday, although people can only play with members of their own household.

The sports venues were ordered to be closed in March when Britain imposed a national lockdown due to the coronavirus outbreak.

Gyms and swimming pools remain closed, although swimming in the sea or lakes will be allowed.

Scotland, Wales and Northern Ireland can set their own stance on tennis courts and golf courses, and their administrations have already indicated a more stringent version of the lockdown will be maintained.

British Prime Minister Boris Johnson used a speech on Sunday to lay out the outlines of a “road map” for easing the coronavirus pandemic restrictions while maintaining forms of social distancing.

Johnson said people can “play sports but only with members of your own household.”

Johnson gave no indication when professional sports can resume after competitions, including the Premier League, shut down in March.

The president of the University of Virginia says he hopes college football can be played this fall, though he cautioned that he does not expect it to seem like “normal football seasons.”

James Ryan told CBS’ “Face The Nation” on Sunday that athletic director Carla Williams and football coach Bronco Mendenhall are committed to a safe return to play, but that nothing will proceed until medical officials say it’s safe to resume workouts.

“We’re taking it day by day,” Ryan said. “Obviously, we need to have students back on grounds before football can begin.”

Virginia is coming off a season in which it won the Atlantic Coast Conference’s Coastal Division championship. The Cavaliers also have recently won national championships in men’s basketball, soccer, tennis and lacrosse.

The Spanish league says five players from clubs in the country's first and second divisions have tested positive for COVID-19.

They are all without symptoms and will be allowed to start practicing after testing negative in further testing. They will need two negative results to be allowed to come back.

The league has not named the players who tested positive. It also hasn’t disclosed their clubs.

Spain this week started loosening some of the lockdown measures that had been in place since mid-March because of the coronavirus pandemic, allowing soccer players to resume training individually.

Most teams returned to action on Friday, including league leader Barcelona. Atlético Madrid resumed its activities on Saturday and Real Madrid players will be back practicing on Monday.

Spanish media has reported that Atlético Madrid defender Renan Lodi was among the players who tested positive. He did not practice on Saturday.

The president of the French Tennis Federation says holding the French Open without fans later this year is an option.

The clay-court tournament at Roland Garros was initially slated to be held May 24-June 7, but was postponed amid the coronavirus pandemic and rescheduled for Sept. 20-Oct. 4.

Bernard Giudicelli tells French newspaper Le Journal du Dimanche that “organizing it without fans would allow a part of the economy to keep turning, (like) television rights and partnerships. It’s not to be overlooked.”

Giudicelli adds that “the lack of visibility is genuine” when hosting a tournament without fans but “we are not ruling any option out.”

That could potentially mean moving the starting date back to Sept. 27, something Giudicelli says “does not change much.”

The FFT is refunding all tickets purchased for the original dates of Roland Garros by the end of May and a new ticketing procedure will be opened if the tournament goes ahead.

A Brighton player has tested positive for the coronavirus as the Premier League pushes ahead with plans to resume during the pandemic.

The southern England club says there is no need for other members of the squad or coaches to self-isolate because players have only trained in isolation when at the training ground.

The positive test came back on Saturday.

Brighton chief executive Paul Barber told broadcaster Sky Sports that “despite all of the measures that we’ve been taking over the past few weeks, where the players haven’t been involved in any significant training at all, we’ve still suffered another player testing positive for the virus.”

Brighton says three players have now had the coronavirus. The club announced one case in March.

Premier League clubs are due to hold a conference call on Monday about “Project Restart.”

Clubs are yet to resume group training as they abide by government social distancing regulations.

Brighton has opposed plans to complete the season in neutral stadiums rather than being able to play its five remaining home games at its stadium.