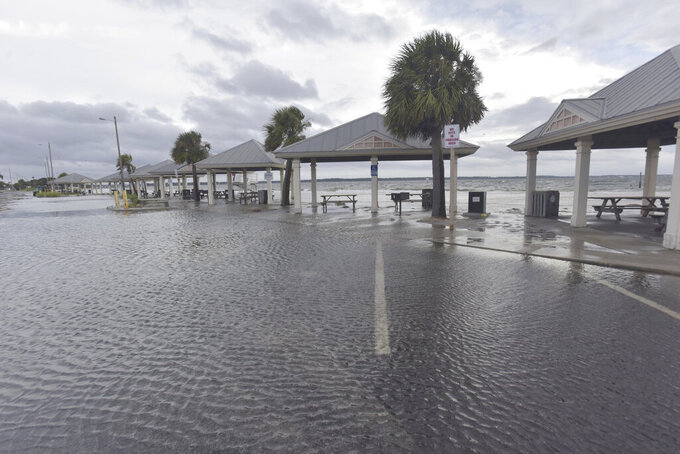 Here are the latest developments on tropical weather (all times local):

Alabama Gov. Kay Ivey sought the presidential declaration after the National Weather Service in Mobile warned of the increasing likelihood of “dangerous and potentially historic flooding.”

The weather service forecast that waters could rise as much as 9 feet (2.7 meters) above ground in large parts of the Mobile metro area.

With a population of 400,000 people, it is among the largest metro areas along the Gulf Coast between New Orleans and Tampa, Florida. Some businesses in Mobile placed sandbags at their entrances in preparation.

DeSantis issued an executive order Monday evening directing state resources to help with response, recovery and mitigation efforts in Escambia and Santa Rosa counties. Federal assistance can also be sought for the areas.

The Centers for Disease Control and Prevention guidelines call for non-congregate sheltering, where evacuees can continue to practice social distancing to prevent the spread of COVID-19. The emergency order authorizes the activation of sheltering agreements with area hotels.

MONTGOMERY, Ala. — Alabama Gov. Kay Ivey says she has asked for a federal emergency declaration ahead of powerful Hurricane Sally’s arrival.

The strengthening Category 2 storm was on track to reach land somewhere near the Mississippi-Alabama state line late Tuesday or early Wednesday. The National Weather Service in Mobile forecast “dangerous and potentially historic” floods from storm surge.

JACKSON, Miss. — The Mississippi Gaming Commission has ordered all 12 casinos along the Gulf Coast to close as Hurricane Sally approaches.

All of the casinos are either on or near the water. The commission told the establishments to close immediately.

NEW ORLEANS — President Donald Trump has issued an emergency declaration for parts of Louisiana and Mississippi as Hurricane Sally moves toward the northern U.S. Gulf Coast.

A news release from the Federal Emergency Management Agency says the declaration authorizes the agency to coordinate disaster relief efforts and provide emergency assistance to the affected areas.

Sally is strengthening in the Gulf while on a forecast track that would take it just east of the tip of southeast Louisiana, on the way to a landfall near the Mississippi-Alabama state line.

The National Hurricane Center said Monday that Sally has recently strengthened and developed an inner core, while the warm waters of the Gulf favor additional strengthen in the coming hours. The hurricane is currently packing 100-mph (155-kph) winds as it meanders offshore.

The Miami-based forecasting center said sustained winds of around 110 mph (177 kph) are now expected just before the hurricane makes landfall. That is just shy of a Category 3 hurricane on the Saffir-Simpson Hurricane Wind Scale, which is capable of catastrophic damage.

UNDATED — Seawater and sand have already washed onto roads on one end of Dauphin Island off the coast of Alabama as Hurricane Sally veers nearer to the U.S. Gulf Coast.

He said emergency officials drove a Humvee to evacuate about 12 to 15 people from one area of the isalnd. He said at least four cars had already been overtaken by ocean water and sand from the storm surge already washing onto part of the island.

MIAMI — A rapidly intensifying Hurricane Sally is closing in on the northern Gulf Coast Sally after reaching Category 2 strength.

The National Hurricane Center in Miami says Sally has grown into an extremely dangerous hurricane with top sustained winds of 100 mph (155 kph). The hurricane was centered at 4 p.m. CDT about 105 miles (170 kilometers) east of the mouth of the Mississippi River. It was also about 145 miles (230 kilometers) southeast of Biloxi, Mississippi.

The center said a hurricane warning is in effect from Morgan City, Louisiana, to Navarre on the Florida Panhandle and also in areas including metropolitan New Orleans and nearby lakes Pontchartrain and Maurepas.

Sally is one of five storms churning simultaneously in the Atlantic.