The Latest: Tsitsipas routs Simon to reach 2nd round 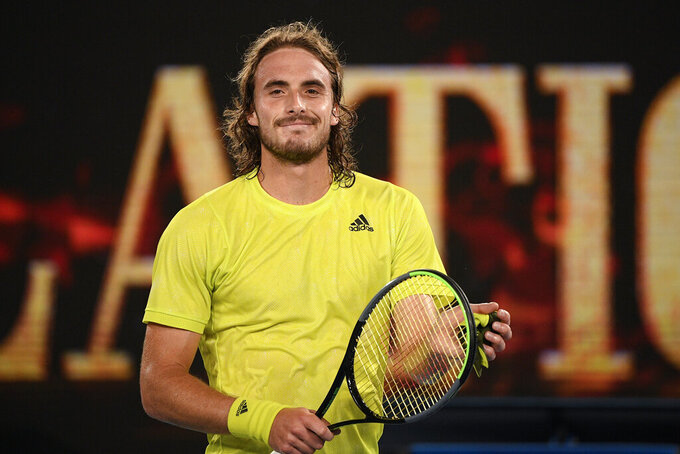 Tsitsipas has a lot of support within Melbourne's large Greek community and felt at home in an extended on-court interview.

Tsitsipas says “I honestly wasn’t expecting it to come so easily. It was a great match from my side,”

There will be fans with divided loyalties in his next match against Australian wild-card entry Thanasi Kokkinakis in the second round.

Kokkinakis has Greek heritage and also has a big following despite his ranking dropping to 267 following struggles with illness and injuries.

The Grand Slam Board has appointed Ugo Valensi as executive director.

The Grand Slam Board comprises the chairs and chief executives of the four major tournaments and the International Tennis Federation president.

Valensi is a 39-year-old Frenchman who was chief executive of Lagardère Sports & Entertainment until its sale last year. He will start his post on March 1.

He says it's a “privilege to join the Grand Slams" and calls them "four of the most iconic organizations in the world of sports."

The Grand Slam Board says Valensi will build on the foundations provided by Bill Babcock and his highest priority will be to enhance the relationship within the game to “reflect the substantial and continuing investment of the Grand Slams towards the future strength and benefit of the sport.”

Mayar Sherif has made history for Egyptian tennis, beating fellow qualifier Chloe Paquet 7-5, 7-5 in the first round of the Australian Open to become the first woman from her country to win a Grand Slam match.

Sherif became the first Egyptian woman to qualify for a Grand Slam tournament when she made the main draw at last year’s French Open. Now, she’s gone a step further.

“Obviously, it means a lot because finally this is a barrier that I had to pass, a mental barrier,” she said, adding she was “very, very happy with my accomplishment and I’m going for more.”

Given her recent success, Sherif’s fame is growing back home. She said she’s often stopped on the streets in Egypt to take photos with fans.

“It’s such a great feeling, especially when kids come and they recognize me,” she said. “I want them to believe in themselves and to see me and look at me and say that we can be like her.”

Top-ranked Ash Barty dominated in her first Grand Slam match in more than a year, dropping just 10 points in a 6-0, 6-0 rout of Danka Kovinic in the first round of the Australian Open.

Barty lost in the semifinals of last year’s Australian Open to eventual champion Sofia Kenin, then skipped the French Open and U.S. Open because she stayed in Australia during the COVID-19 pandemic. Before winning last week’s Yarra Valley Classic warm-up tournament, Barty hadn’t played a competitive match since last February.

Barty, the 2019 French Open champion, said after the match she missed tennis “every single day” during her long time away from the sport.

If Rafael Nadal has a bad back, he didn't show any signs of it in his 6-3, 6-4, 6-1 win over Laslo Djere in the first round at the Australian Open.

The No. 2-ranked Nadal is aiming to go one better than Roger Federer and win a men’s-record 21st Grand Slam singles title.

He didn’t play for Spain at the ATP Cup last week and has been troubled by stiffness in his lower back.

“Well, it's been a tough 15 days for me. I had some issues with the back,” Nadal said in his post-match interview. "I needed to survive today. That’s what I did.

“Straight sets — that’s what I need.”

American 16-year-old Coco Gauff is into the second round at the Australian Open.

Gauff advanced by beating Jil Teichmann of Switzerland 6-3, 6-2. The youngest player in the tournament, Gauff served out the first set with three aces in the final game and gained momentum from there.

A year ago Gauff advanced to the round of 16 in her Melbourne debut, and that run included an upset victory over Naomi Osaka. Gauff also reached the round of 16 at Wimbledon in 2019, making a big splash in her first Grand Slam appearance.

American Jessica Pegula is building on her momentum from the end of last year, upsetting 12th-seeded and two-time former Australian champion Victoria Azarenka 7-5, 6-4 to advance to the second round for the first time.

Azarenka required medical attention on court in the second set when she bent over in the middle of the game and appeared to have trouble breathing. After a medical timeout, she managed to hold serve and break Pegula to level the match at 4-all, but then lost the final two games.

The 26-year-old Pegula had her best-ever result at a major at last year’s U.S. Open, where she reached the third round. She also won two matches at last week’s Yarra Valley Classic warm-up tournament before losing to defending Australian Open champion Sofia Kenin in three sets.

Azarenka, who won the Australian Open in 2012 and 2013, was one of 72 players who were forced into hard quarantine after arriving in Australia. She played just one match after being released in late January.

Seventeen-year-old Carlos Alcaraz of Spain was impressive in his highly anticipated Grand Slam debut match, defeating Dutch qualifier Botic Van de Zandschulp in the first round of the Australian Open 6-1, 6-4, 6-4.

The 141st-ranked Alcaraz, who has been compared to Rafael Nadal and is coached by former No. 1 Juan Carlos Ferrero, became the youngest man to win a Grand Slam singles match since Thanasi Kokkinakis of Australia defeated Igor Sijsling at the 2014 Australian Open.

Alcaraz said he was nervous before the match and didn’t feel very relaxed in the first couple of games. After settling down, though, he broke his opponent twice to take the opening set in 22 minutes.

Paula Badosa has lost her first-round match at the Australian Open after going through a three-week quarantine because she tested positive for COVID-19.

Badosa already was in a hard quarantine — not allowed to leave her hotel room in Melbourne — after potentially being exposed to the coronavirus on an Australian Open charter flight. But then she tested positive for the illness on her seventh day in lockdown, and so needed to isolate for another two weeks.

She was allowed to play in the tournament after testing negative.

Badosa was born in New York but lives and trains in Barcelona and reached the French Open’s fourth round last year.

She led 5-3 in the third set Tuesday but faltered against Samsonova, a 22-year-old from Russia who is ranked 130th and entered the day 0-4 in Grand Slam tournaments.

Rising star Andrey Rublev of Russia has won his opening match at the Australian Open, beating Yannick Hanfmann of Germany 6-3, 6-3, 6-4.

Rublev won five tour-level titles last year, the most of any player, and his ranking is a career-high No. 8. At 23 he’s a three-time Grand Slam quarterfinalist who had his best showing in Melbourne last year, when he reached the round of 16.

Rublev hit 17 aces against Hanfmann and overcame an early break, holding serve the rest of the way.

Sofia Kenin’s Australian Open title defense got off to a bit of a rocky start before she righted herself and pulled out a two-set win.

The 22-year-old American trailed by an early break and took about 45 minutes to actually wrest some semblance of control before eventually beating 133rd-ranked Australian wild-card entry Maddison Inglis 7-5, 6-4.

Inglis never has won a tour-level match, falling to 0-6.

But she did not make things easy on Kenin, who nevertheless managed to avoid becoming the first woman since Jennifer Capriati in 2003 to lose in the first round at the Australian Open a year after winning the championship.

“First round, it’s obviously nerves for me,” said Kenin, who followed up her first major title last year by reaching the final at the French Open.

Kenin acknowledged with a chuckle that she was “not too happy with the way I played” but added: “A win is a win.”

Garbiñe Muguruza has won her opening match at the Australian Open, where she reached the final last year before losing to American Sofia Kenin.

Muguruza improved to 9-0 in first-round matches at Melbourne Park. The two-time Grand Slam champion lost only 11 points in the second set.

Li is a 20-year-old American who is ranked 69th and competing in only her third career Grand Slam tournament.

She needed just 47 minutes to win and improve to 5-0 this season.

Li is coming off an unusual accomplishment at a tuneup tournament at Melbourne Park last week: She shared the title of the Grampians Trophy with Anett Kontaveit because organizers decided not to hold a final so as not to wear out the players right before the Australian Open.

That warmup event was created for players such as Li who had to go into a hard lockdown after potentially being exposed to COVID-19. They were not allowed out of their hotel rooms for practice — or any other reason — during a two-week quarantine upon arrival in Australia.

Sofia Kenin begins defense of her Australian Open title when she takes on Australian Maddison Inglis to begin play at Rod Laver Arena. Kenin beat Garbiñe Muguruza in the final last year in three sets for her first Grand Slam singles title. Muguruza will be in action at the same time, kicking things off at Margaret Court Arena in a match against Margarita Gasparyan.

Rafael Nadal plays the final day match at Rod Laver Arena against Laslo Djere. This is Nadal’s first chance to grab sole possession of the men’s mark for most Grand Slam singles titles. He pulled even with Roger Federer at 20 by winning the French Open in October, beating Novak Djokovic in a lopsided final. Federer is still sidelined after two knee operations and is not playing here.