The Latest: UAB-North Texas football game off for Saturday 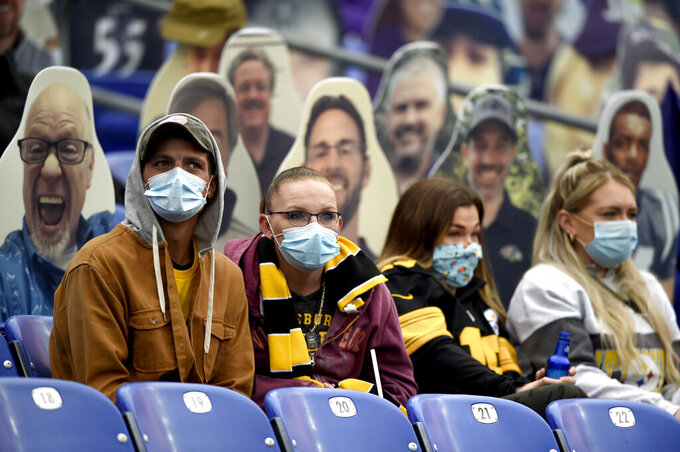 FILE - In this Nov. 1, 2020, file photo, spectators wear face masks to protect against COVID-19 during the first half of an NFL football game between the Baltimore Ravens and the Pittsburgh Steelers, in Baltimore. A new set of rules are coming in just about every sport, almost all with enhanced health and safety in mind. If they work, games could get out of bubbles and return to arenas and stadiums with some fans in attendance sometime soon. Perhaps more importantly, they could also provide some common-sense solutions to virus issues in the real world.(AP Photo/Gail Burton, File)

The Conference USA game between UAB and North Texas scheduled for Saturday won't be played because of a COVID-19 outbreak and contact tracing among the Blazers.

The schools said there’s a possibility the game could be rescheduled.

North Texas has already had to move games with Louisiana Tech (Dec. 3) and UTEP (Dec. 12). UAB is 4-3 overall and 2-1 in the league. North Texas has only played five games, winning two and going 1-2 in C-USA.

The Ivy League on Thursday became the first Division I conference this year to cancel all winter sports, including men’s and women’s basketball.

The decision came 13 days before the scheduled start of the college basketball season. The league had decided this past summer, when it canceled fall sports, not to allow any of its sports to start play before early December.

The league was the first conference to scrap its postseason basketball tournament last March. That preceded a cascade of cancellations. All major college and professional sports were halted within days.

The Ivy League announcement affects not just basketball, but wrestling, indoor track and field, swimming, fencing and other sports.

The women’s basketball team at Cal State University in Northridge doesn’t have enough athletes to safely compete this season after six women opted out of playing because of concerns about the novel coranvirus, the school said Thursday.

The Matadors had 12 players to start preseason camp but six of those then decided not to play. Another player can’t return to campus from out of the country because of travel limitations. That has left only six available players.

Athletic director Mike Izzi said in a statement: “Student-athlete safety will always be our priority. Given the number of students that have voluntarily elected to opt-out of competition this year, our women’s basketball team will not be able to have a healthy and safe opportunity to compete this season. There is no question that supporting the welfare of student-athletes is what drives us, making our direction clear.”

Mississippi State starting safety Marcus Murphy says on social media that he will opt out the rest of this season, leaving the Bulldogs without their No. 4 tackler for the final four contests.

Murphy did not specify his reasons for opting out or his plans in Thursday’s post on his verified Twitter account. The junior wrote that he appreciated the support he received at MSU.

A message left with a Bulldogs football spokesman was not immediately answered.

Murphy had 34 tackles with 22 assists, a tackle for loss and pass breakup in six games this season. That included a season-best 10 stops in last week’s 24-17 victory over Vanderbilt.

The Bulldogs’ scheduled game against No. 20 Auburn on Saturday was postponed this week based on positive tests and close contacts that left the team below the required minimum of 53 scholarship student-athletes.

The Las Vegas Raiders have placed linebacker Cory Littleton on the COVID-19 list.

The team made the announcement after practice Thursday. Littleton joins right tackle Trent Brown as Raiders currently on the COVID-19 list.

The list is used for players who either test positive for COVID-19 or have been quarantined after having been in close contact with someone who has been infected.

Miami Dolphins linebacker Kyle Van Noy and defensive tackle Christian Wilkins went on the COVID-19 list Thursday, the latest setback for a team already in the NFL’s intensive protocol for the coronavirus.

Both players are starters. Reserve receiver Matt Cole also went on the list, and receiver Lynn Bowden Jr. was activated from the list.

The Dolphins had five assistant coaches unavailable for last week’s game at Arizona because of COVID-19 protocols, and at least one assistant tested positive. That forced the team to limit practice activities and meet virtually.

Oregon State says one player has tested positive for COVID-19 and three others have been isolated.

The Beavers (0-1) continued to prepare for Saturday night’s game at Washington, athletic director Scott Barnes said. The four players impacted will not be available.

Oregon State expects to identify the players before game time and will do the same with any players that test positive going forward.

The player tested positive on Monday, and the result was confirmed by another test. All of the players impacted must remain in isolation for at least 10 days.

Head coach Jonathan Smith told the team about the situation before practice on Thursday.

The Chicago Bears activated backup safety Deon Bush from the Reserve/COVID-19 on Thursday.

Bush was one of several Bears players placed on the list last week because of positive coronavirus tests or close contacts. The team also canceled practice and closed its facility for a day.

Bush has played in six games this season and has an interception.

The Bears have lost three in a row. They host the Minnesota Vikings on Monday night.

The school says she has gone into isolation and will miss Friday’s meet at South Carolina.

UConn basketball coach Dan Hurley is considering delaying the start of his team’s season after a player’s positive coronavirus test last week forced the program to suspend all activities for two weeks.

Hurley said Thursday that he hopes the team will be able to get back to practice on Nov. 19 and play its first games on Nov. 25 and Nov. 27. But contracts for those games have not been signed and Hurley says ramping up practice after two weeks off will be difficult.

He says the team’s priority is being ready for Big East Conference play on Dec. 11.

The Baltimore Ravens say a player has tested positive for the coronavirus. The team says the player — whose name was not released — immediately began to self-quarantine.

The organization is now in the NFL’s intensive protocol.

The Ravens say there were no high-risk contacts, and no other player or staff member has been required to isolate.

All-Pro cornerback Marlon Humphrey returned Wednesday after being on the reserve/COVID-19 list.

The Serbian soccer federation says defender Luka Milivojevic has tested positive for the coronavirus ahead of the European Championship playoff match against Scotland.

The federation says the 29-year-old Crystal Palace defender left the squad’s training ground near Belgrade and put himself in isolation.

Hoffenheim says defender Kevin Vogt was found to be positive in a test taken Wednesday after an earlier sample gave an inconclusive result.

The whole team was placed in isolation on Wednesday.

Five other Hoffenheim players and two staff members have tested positive for the virus in the last week. Two of those players were only found to be positive after they had joined up with their national teams.

Two more Hoffenheim players were withdrawn from their national teams as a precaution despite testing negative.