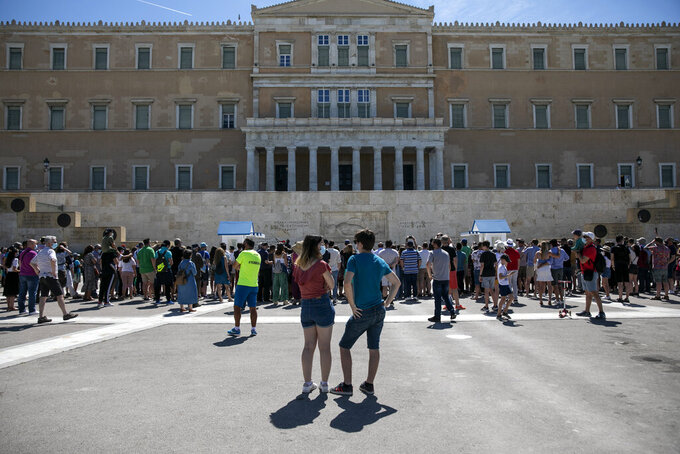 People watch a change of shift of Presidential guards, in Athens, Sunday, May 23, 2021. Greece launched its tourism season last week amid a competitive scramble across the Mediterranean to lure vacationers emerging from lockdowns. (AP Photo/Yorgos Karahalis)

LONDON - British health officials expressed optimism Sunday that the coronavirus restrictions remaining in England can be lifted in June after an official study found that the Pfizer and AstraZeneca vaccines offer effective protection against the variant first identified in India.

— The poor, the rich: In a sick India, all are on their own

— IOC VP gets backlash saying Olympics are on, no matter virus

PARIS - The French foreign minister says it’s possible that France will introduce stricter coronavirus restrictions for British visitors when tourism reopens this summer, to prevent the spread of a worrying virus variant first detected in India and causing concern in Britain.

BRASILIA, Brazil - Brazil’s health minister said the government is concerned about the coronavirus variant first identified in India after the first cases of it were confirmed in the South American country.

Tribal health officials said the latest figures released Saturday evening pushed the total number of cases since the pandemic began more than a year ago to 30,767 on the vast reservation that covers parts of Arizona, New Mexico and Utah.

On Saturday, there were two new coronavirus cases on the reservation but no reported deaths.

Navajo Nation President Jonathan Nez said more than half of the reservation’s adult population has been vaccinated.

BOSTON — The number of people fully vaccinated against COVID-19 in Massachusetts is approaching 50%, state officials said.

The Massachusetts Department of Public Health said late Saturday that more than 3.4 million people in the state are fully vaccinated. Massachusetts has about 7 million residents.