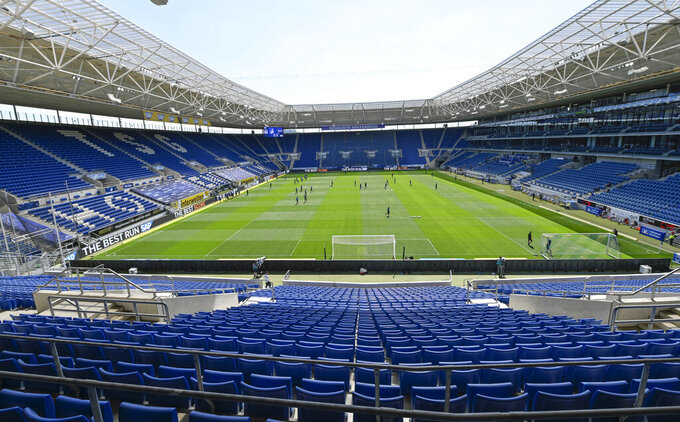 Players of Hoffenheim and Hertha warm-up in the empty stadium prior to the Bundesliga soccer match between TSG 1899 Hoffenheim and Hertha BSC Berlin in Sinsheim, Germany, Saturday, May 16, 2020. The German Bundesliga becomes the world's first major soccer league to resume after a two-month suspension because of the coronavirus pandemic. (Thomas Kienzle/AFP pool via AP)

USA Baseball has tentatively scheduled July 24 as the start date for its 2020 schedule of summer events.

The nation’s sport governing body says the first event would be the 14U Cup from July 24-26 at the national training complex in Cary, North Carolina. Eight other age-group competitions will be held from late July through August.

All events are subject to cancellation or postponement based on the coronavirus pandemic. USA Baseball is following recommendations of the Centers for Disease Control and Prevention and the United States Olympic & Paralympic Committee. If the tournaments run as scheduled, teams and fans will be required to follow a series of return-to-play guidelines developed by USA Baseball. Those guidelines will be shared within an appropriate timeframe.

World TeamTennis CEO Carlos Silva says the league is “still on track for July 12” to open its three-week season and is hoping to select a site this week.

Silva said in a telephone interview Monday with the AP that four cities are “in the mix.” He mentioned Texas and Florida as possible host states.

The International Tennis Federation and the ATP and WTA tours said Friday they were extending their suspensions of play into late July because of the coronavirus pandemic.

But World TeamTennis is not sanctioned by those three groups and doesn’t need to follow their guidelines.

The WTT already had announced that it would be picking one city to host all nine of its teams for the 2020 season, instead of playing matches around the United States, as it usually does.

Silva said he has been monitoring other events taking place recently to see how they handled health protocols, including UFC fights over the past week-plus and a NASCAR race Sunday in Darlington, South Carolina.

Neither of those sports allowed spectators and while WTT’s plan at the moment is to do the same, Silva said it is possible a small number of fans might be allowed, depending on where the matches are.

Bundesliga soccer players will be reminded not to celebrate goals together after Hertha Berlin’s team shared hugs and high fives over the weekend.

Most teams have stuck to restrained arm bumps when they score but Hertha’s more exuberant celebrations in the 3-0 win over Hoffenheim on Saturday prompted criticism they were undermining the league’s social distancing guidelines.

Bundesliga International CEO Robert Klein says clubs “are speaking with (players) day in, day out to tell them and remind them of what needs to be done to ensure that we can earn the right to go to a second match day and a third match day and then to finish the season.”

Klein says overall the guidelines were “well respected” as the top two divisions in German soccer returned to action amid the coronavirus pandemic.

Players can’t be fined or banned for celebrating together.

Players from Spanish soccer club Rayo Vallecano have refused to practice in protest against reduced salaries.

The players from the second-division club want to be taken off furlough before they return to training. They want to resume earning full salaries now that soccer is starting to come back.

Spanish media say the players practiced at home instead of going to the team’s training center for the start of group sessions.

Players from second-division club Elche also refused to practice at the team’s training center last week and the club eventually complied with their demands.

Most Spanish clubs used government furloughs to reduce their labor costs after the soccer season was halted because of the coronavirus pandemic. Most players had their salaries and working hours reduced by 70%.

Rayo Vallecano was in 11th place when the second division was halted in mid-March. The Spanish league hopes the season will restart on the second weekend of June.

The English Football Association says it is in discussion with clubs in the top women’s league about the possibility of cutting short the season because of the coronavirus pandemic.

The FA says there are “significant challenges” in completing the season and the governing body is seeking views on the “most appropriate sporting outcome.”

Manchester City leads the Women’s Super League by one point. Chelsea is second and has played one game fewer.

No league games have been played since February.

UEFA says it has postponed an executive committee meeting by three weeks because of issues regarding the venues for the rescheduled European Championship in 2021.

The 24-team tournament was pushed back a year because of the coronavirus pandemic. It is scheduled to use 12 stadiums in 12 nations.

UEFA wanted the host cities to confirm they could still stage games.

The governing body of European soccer says its executive committee will meet on June 17 instead of May 27 “due to the existence of some remaining open points regarding a small number of proposed venues” for Euro 2020.

UEFA president Aleksander Ceferin has said Euro 2020 can be staged without all 12 stadiums.

Premier League clubs have agreed on the measures that will allow non-contact training sessions to resume this week amid the coronavirus pandemic.

The protocols for socially distanced training in small groups were signed off by the clubs during a conference call following a government decision to ease lockdown restrictions in England.

Contact training and matches have yet to be allowed by the government.

The Premier League season was suspended in March with Liverpool leading by 25 points with nine games remaining.

Coronavirus testing is due to take place twice each week at clubs on up to 40 players, coaches and support staff.

Belgian soccer clubs have been allowed the possibility to designate three teams they don’t want to host in empty stadiums next season.

The league says it will try to accommodate the club’s wishes amid the coronavirus pandemic.

The measure could be used by clubs to avoid playing famous clubs or bitter rivals in front of empty stands for matches that usually draw many fans and generate big ticketing revenue.

All sporting competitions in Belgium will remain suspended until July 31 because of the health situation and all mass events have been banned until Aug. 31. The first round of soccer matches for next season will likely be played without fans when the league resumes on Aug. 7.

Club Brugge was awarded its 16th Belgian title last week after the league announced the end of the season with the current standings declared final.

The Spanish soccer player who threatened to quit his team rather than risk being infected by the coronavirus has returned to training.

Cádiz defender Fali Giménez rejoined his teammates at the second-division club about a month after saying he wouldn’t play again unless there was a vaccine for COVID-19 or if he was assured 100% that he wouldn’t get infected after being back on the field.

Giménez did not practice last week as the rest of the squad returned to training nearly two months after soccer was halted.

The 26-year-old Spaniard had said it didn’t make sense to play soccer while people were dying because of the virus. He said he would not forgive himself if he got infected and passed the virus to a family member.

Cádiz lauded Giménez’s return and published photos and videos of him training with his teammates. He underwent alternative drills because he missed last week’s sessions.

Celtic has been declared Scottish champion after the country’s top soccer league was cut short because of the coronavirus outbreak.

It is Celtic’s ninth straight title.

The Scottish Professional Football League says clubs expressed a unanimous view that there is no prospect of completing the season.

The SPFL says it has accepted their decision and is now able to pay out $8.5 million in fees “to help clubs stay afloat.”

There have been no games in the Scottish Premiership since March 13 because of the pandemic. Final season placings have been determined by points per game up to that point.

Hearts has been relegated.

A soccer player in Germany for third-division club Chemnitz has tested positive for the coronavirus.

Chemnitz did not name the player but the club says he is “completely symptom-free.” That player and two other players who had contact with him will spend 14 days in isolation.

Chemnitz says the player tested positive in a sample taken Saturday but had tested negative in a sample from two days before that. The club says it can still return to full team training on Tuesday.

The first and second divisions in Germany returned to play Saturday but the third-division restart was postponed last week from its planned date of May 26. Some clubs have still not received clearance from local authorities to play or hold full training sessions.

Soccer players in Italy will have to wait at least another 24 hours before restarting full team training.

Italian clubs resumed training on an individual basis on May 4 when lockdown measures in the country started to ease. They were slated to return to training together on Monday but they have not yet been given the green light to do so by the Italian government’s scientific panel.

The medical protocol for the resumption of Serie A has proved contentious but a revised document was delivered to Sports Minister Vincenzo Spadafora on Sunday and is expected to be given to the scientific panel on Monday.

Serie A plans to resume on June 13.