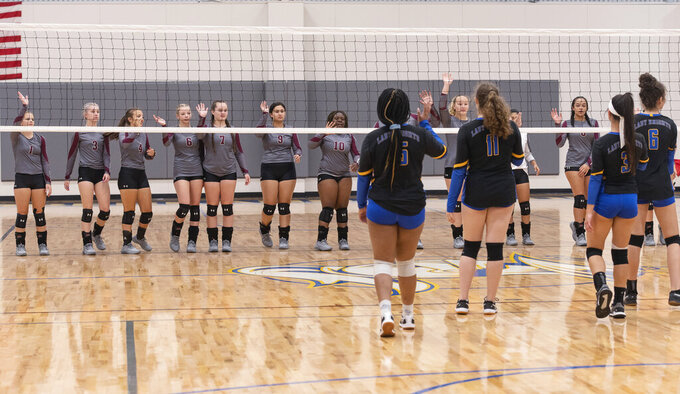 Arp High School's varsity volleyball team approaches the net from a safe distance to wave to the Cumberland Academy team in lieu of shaking hands at the start of a match at Cumberland Academy on Tuesday, Aug. 25, 2020, in Tyler, Texas. (Sarah A. Miller/Tyler Morning Telegraph via AP)

Vanderbilt's football team is back at practice after a coronavirus-caused stoppage, and coach Derek Mason says a couple of players remain in quarantine.

Mason says the team had to stop practicing because a couple of Commodores tested positive for COVID-19. Vanderbilt canceled a practice Friday and wound up missing two practices before resuming work on the field Wednesday.

The coach says that allowed them to do contact tracing and check what areas they can be better at when dealing with a pandemic. Mason says the stoppage offered a good reminder for players to take care of one another, a message he believes they got loud and clear.

Vanderbilt is scheduled to open the season on Sept. 26 with a game at Texas A&M.

The Cleveland Browns still don’t know if they’ll have fans at games due to the COVID-19 pandemic. But in case they do, the team sent a letter to season ticket holders outlining plans and protocols that will be in place at FirstEnergy Stadium.

There is still a chance the Browns will have a “limited amount of fans” when they open at home on Sept. 17 against the Cincinnati Bengals. The team recently presented its “Responsible Restart Plan” to the city and Ohio state health departments and is awaiting approval.

All fans will be required to wear masks and there will be a four-quadrant system in the 65,000-seat stadium to keep fans safely separated. The Browns will have pregame health screenings and fans will enter through a dedicated gate close to their seats before sitting in pods of 1 to 10 people.

Several NFL teams already have they won't have fans at their early season games.

The Bengals announced Tuesday they won’t have fans for their season opener at Paul Brown Stadium on Sept. 13. They applied for an exemption to the state’s ban on large public gatherings, but it was turned down.