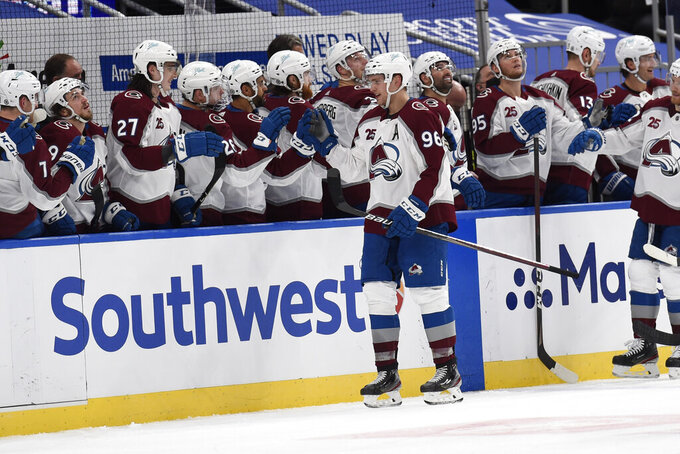 Colorado Avalanche's Mikko Rantanen (96) is congratulated by teammates after scoring a goal against the St. Louis Blues during the second period of an NHL hockey game on Wednesday, April 14, 2021, in St. Louis. (AP Photo/Joe Puetz)

Six Challenger tennis tournaments scheduled for Canada this year have been canceled because of the pandemic.

The Calgary (Alberta) National Bank Challenger and the women’s Challenger event in Fredericton, New Brunswick, will not take place in 2021 following their October postponement.

So far, Tennis Canada has postponed or canceled 14 Challenger events, which are a tier below events on the ATP and WTA tours, since the start of 2020 because of COVID-19.

The Drummondville (Quebec) National Bank Challenger, originally scheduled for March 2021, might be played later this year.

The San Jose Sharks will welcome back fans on a limited basis beginning April 26 against Arizona.

The Sharks say fans with proof of vaccination or a negative test for COVID-19 will be allowed to attend games for the rest of the season.

Tickets will be sold in pods of two to four seats with distancing between each group. Fans must wear masks when not actively eating or drinking in designated areas and will not be allowed to bring bags into the games..

The team will do a test run April 24 with family members of players and staff allowed at the game against Minnesota.

Pending test results, the team could return to practice as early as Wednesday and resume play on Thursday at St. Louis.

The NHL also rescheduled a pair of games between the Vancouver and the Toronto Maple Leafs as the Canucks come back from a COVID-19 outbreak. The Leafs were set to play in Vancouver on Saturday and Monday, but the league said the games have been rescheduled for Sunday and Tuesday.

The Canucks have had 11 games postponed since the outbreak hit late last month. At least 21 players and four members of the coaching staff have tested positive for the virus.

Canucks general manager Jim Benning said Thursday that several players had not yet received the medical clearance necessary to return to the ice.

Three major league players and three staff members were positive for COVID-19 during the past week among 11,713 tests, a 0.05% positive rate.

There have been three COVID-related postponements, all a season-opening series between Washington and the New York Mets.

In the final figures released last year, MLB said it had collected 172,740 samples and that 91 had been positive, or 0.05%. Fifty-seven of 91 positives were players, and 21 of the 30 teams have had a person covered by the monitoring test positive.

There were 45 regular-season games postponed for virus-related reasons last year but just two were not made up, between St. Louis and Detroit.