Law and order vs. health care as Dems, GOP vie for suburbs 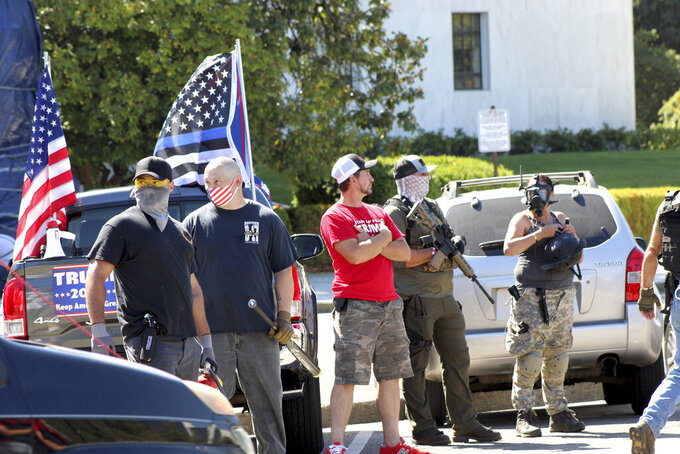 FILE - In this Sept. 7, 2020 file photo, armed right-wing protesters in support of President Donald Trump stand in front of the Oregon State Capitol in Salem, Ore. In the campaign for House control, some districts are seeing a fight between Democrats saying they'll protect voters from Republicans willing to take their health coverage away, while GOP candidates are raising specters of rioters imperiling neighborhoods if Democrats win. (AP Photo/Andrew Selsky, File)

WASHINGTON (AP) — In Republican hands for 28 years but now up for grabs, a suburban Missouri congressional district hugging St. Louis has become a lab for what each party considers one of its most lethal political weapons.

Scores of suburban districts are back in play in the GOP's long-shot attempt to win House control in November's election. Democrats who used health care to capture the majority in 2018 are emphasizing it anew, saying they'll shield voters from Republicans trying to tear coverage away during a pandemic.

“This is as current an issue as can possibly be,” said Leslie Dach, who heads the Democratic-backed Protect Our Care Coalition.

In some races, Republicans are talking up lawlessness to try stemming defections of educated, moderate suburban voters from the GOP, spurred by aversion to President Donald Trump. But even where Republican candidates promote themes such as rebuilding the economy, Trump’s blunt-force ads and his tweets on law and order have kept it in the forefront.

“If I don’t win, America’s Suburbs will be OVERRUN with Low Income Projects, Anarchists, Agitators, Looters and, of course, `Friendly Protesters,'” he tweeted recently.

Wagner has voted for bills that would have ended the coverage that former President Barack Obama’s health care law guarantees people with preexisting conditions. She’s introduced bills to protect such coverage, her campaign says.

Schupp has said she opposes defunding police, a far-left call to restructure and even cut police agencies that many Democrats reject. She's been backed by Indivisible, a progressive group that supports the proposal.

Each party says their messaging is poll-tested and will work.

Public safety and police defunding are “an increasingly significant and powerful issue” in suburbs, said Dan Conston, president of the Congressional Leadership Fund. Conston, whose group is aligned with House GOP leaders, said with health care, Democrats are betting “their tired, dated arguments will work.”

“Health care is the number one issue that people care about,” counters Rep. Cheri Bustos, D-Ill., who heads the Democratic Congressional Campaign Committee, House Democrats' campaign arm. She says Democrats are “on the right side” on law and order, supporting peaceful marchers but denouncing “people who are burning buildings.”

A September survey by The New York Times and Siena College found that while majorities in swing states Wisconsin and Minnesota called lawlessness a major U.S. problem, few considered it a primary concern at home.

Republicans say they've detected growing support on the issue since last month's violence in Kenosha, Wisconsin, after police shot a Black man. This summer's racial justice protests have been largely peaceful, but images of violent ones have received widespread attention.

Defunding police “is an absolute loser with suburban voters,” said GOP consultant Liesl Hickey. She said the issue is a twofer because it “plays into the bigger fear of what they see as the radical left."

Still, Republicans say they must use the theme carefully.

“I think Democrats are vulnerable to it," said Sam Geduldig, who advised former House Speaker John Boehner, R-Ohio. “But the harder you go on it, the more it turns off some of those wealthy suburban voters in some districts we need."

In 31 House races where Democrats have aired ads and Bustos’ organization is helping them, spots in 28 contests make health care arguments, according to committee figures.

Democrats have run health care themed ads against Republicans in numerous states including Colorado, Illinois, Indiana, Nebraska and Texas. According to data from the ad-tracking company Kantar/CMAG, Biden’s campaign has run a spot in around 30 states. In it, he promises to protect people's coverage “the same way I would my own.”

“The political extremists have gone too far,” the ad says as protesters smash storefronts. On his campaign website, Hoadley says he favors changes such as training officers to avoid racial bias.

In a coastal district south of Los Angeles, Republican challenger Michelle Steel has talked about taxes, while Democratic Rep. Harley Rouda has focused on health care and prescription drug costs.

Even so, according to Kantar/CMAG, one Trump campaign spot that's run this month in a half-dozen states accuses Biden of wanting to defund the police.

“The radical left has taken over Joe Biden,” the announcer says as protesters batter windows. It adds, “Don't let them take over America.”

Biden has repeatedly said he opposes defunding the police.