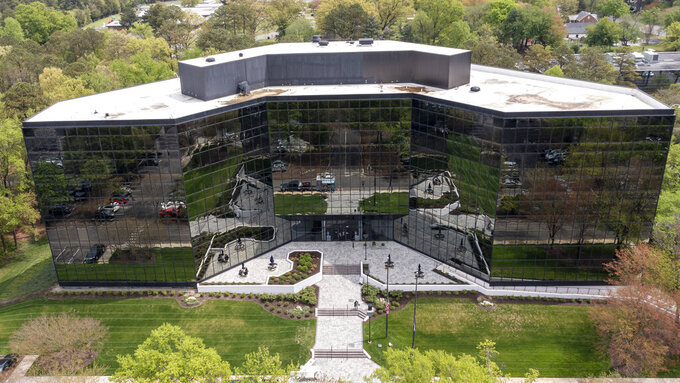 This image taken with a drone shows exterior of the headquarters of the Virginia Employment Commission in Richmond, Va., Thursday, April 15, 2021. Five women are suing the leader of the Virginia agency that handles unemployment benefits, alleging "gross failures" to provide needed help as required by law amid the coronavirus pandemic. The class-action lawsuit was filed Thursday morning, April 15, 2021, in federal court in Richmond on behalf of the plaintiffs by several legal aid groups and their pro bono partners. Named as the defendant is Ellen Marie Hess, head of the Virginia Employment Commission. (AP Photo/Steve Helber)

RICHMOND, Va. (AP) — Five women are suing the leader of the Virginia agency that handles unemployment benefits, alleging “gross failures" to provide needed help as required by law amid the coronavirus pandemic.

The class-action lawsuit was filed Thursday morning in federal court in Richmond on behalf of the plaintiffs by several legal aid groups and their pro bono partners. Named as the defendant is Ellen Marie Hess, head of the Virginia Employment Commission.

The lawsuit alleges the commission has violated the rights of Virginians who have either applied for benefits and gotten no response or who had their benefits abruptly halted and faced lengthy delays in having their case adjudicated.

The lawsuit does not allege that everyone who files a claim with the VEC is entitled to benefits, the groups bringing the suit said in a news release.

The agency has been swamped with an unprecedented flood of applications for benefits since the start of the pandemic. But problems have persisted for over a year, leading critics to say Democratic Virginia Gov. Ralph Northam's administration has not done enough to resolve the issues.

Virginians in need of help and unable to get answers from the commission have turned to news reporters and social media, and flooded the offices of their local elected officials with calls for help.

In the news release, the legal groups noted Democratic U.S. Sen. Mark Warner recently wrote to Northam urging him to speed the distribution of unemployment benefits.

"I hope you can agree that for constituents still experiencing delays the lack of pandemic unemployment insurance is unconscionable," Warner wrote in the letter sent in late March.

Data kept by the federal government also shows Virginia has been particularly slow in dealing with certain claims. For the fourth calendar quarter of 2020, the Commonwealth ranked last among all 50 states plus the District of Columbia, Puerto Rico and the Virgin Islands for timeliness in deciding “nonmonetary issues,” such as why someone's job ended, the lawsuit notes.

Northam's spokeswoman, Alena Yarmosky, wrote in an email that while she could not comment on pending litigation, the governor is committed to getting Virginians the benefits they deserve.

“Over the past year, VEC has paid out $13 billion in benefits to 1.3 million people — more people than over the last 10 years combined. It’s important to remember that not everyone who applies for benefits will be eligible, and appeals require a longer process,” she wrote.

One plaintiff in the lawsuit, Lenita Gibson of Portsmouth, was laid off in February 2020 from a shipyard, according to the complaint. Gibson, who had worked in shipyards for roughly 20 years, filed for unemployment and received payment for about three weeks before her benefits were halted without explanation.

The lawsuit says Gibson waited for months for word from the commission, often trying without success to get through on the call system, until receiving a form letter dated December 2020 that said her payments would resume while she waited for her case to be reviewed by a deputy.

“Nevertheless, Gibson has not received benefits,” the lawsuit says.

Gibson found work at a seasonal swimming pool last year but no other employment and became homeless for about four months from late 2020 to early 2021, according to the complaint.

“I have no income now, other than food stamps. I have a roof over my head again, for now, only through temporary assistance from rent relief programs,” Gibson said in a statement. “The financial loss has been tremendous, and emotionally you are just a wreck. It’s been horrible.”

The plaintiffs are seeking the adjudication and payment of their unemployment benefits and a prohibition against “further violations of law,” plus attorneys’ fees and costs and other relief the court deems just and appropriate.

“We hope the lawsuit filed today will give these hard-working Virginians quick, tangible relief,” Ann Kloeckner, the executive director of Legal Aid Works, one of the groups involved, said in a statement.

The Legal Aid Justice Center and the Virginia Poverty Law Center are also assisting with the case, along with Consumer Litigation Associates, a Newport News-based firm, and Kelly Guzzo, PLC, based in Fairfax.