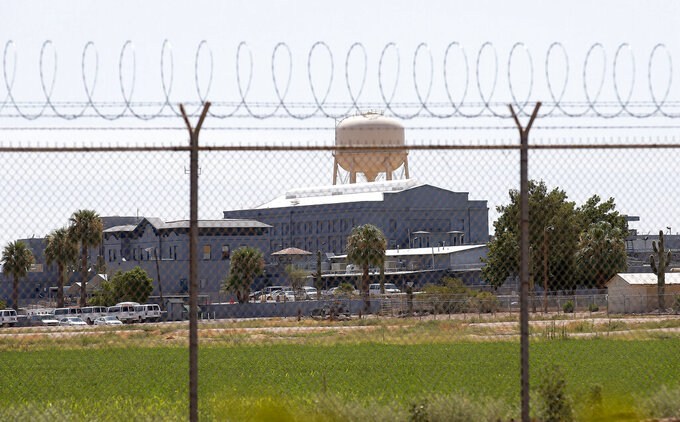 FILE - This July 23, 2014, file photo, shows a state prison in Florence, Arizona. Lawyers representing Arizona prisoners said in a filing on Friday, April 16, 2021, that a third round of contempt of court fines against the state for failing to improve health care for incarcerated people could reach as high as $23 million. They said their estimate on the maximum possible fine was higher than previously thought due to what they said were their discoveries of additional instances of corrections officials not complying with a 6-year-old settlement over the issue. (AP Photo/File)

PHOENIX (AP) — Lawyers representing Arizona prisoners say a third round of contempt of court fines against the state for failing to improve health care for incarcerated people could reach as high as $23 million.

The estimate on the maximum possible fine is $7 million higher than previously estimated because of what the attorneys said were their discoveries of additional instances of corrections officials not complying with a six-year-old settlement over the issue.

In a filing Friday, the attorneys asked Judge Roslyn Silver to order the state to pay some or all of the fine, rather than getting reimbursed by the company that provides health care in state prisons, as the state has done with at least one of its two earlier contempt fines totaling $2.5 million. The prisoners are asking Silver to take over health care operations in all state-run prisons and appoint an official to run health services.

Over the last several years, corrections officials have been dogged by complaints that they have dragged their feet in fulfilling the state’s promises made in the settlement, which now covers about 30,000 inmates in Arizona’s 10 state-run prisons.

A court-appointed expert has concluded that understaffing, inadequate funding and the privatization of health care services are significant barriers in improving health care in Arizona’s prisons. Silver has threatened to fine the state for noncompliance with the settlement during the last 10 months of 2020.

In bid to stave off another fine, the state has acknowledged 178 instances of noncompliance and cited the demands of the pandemic, saying the coronavirus forced people working in prisons to take on more duties, caused employees to miss work and resources to be spent on trying to guard against the coronavirus.

Attorneys for prisoners say they discovered 58 additional instances of noncompliance.

In seven instances, the lawyers said the state came close to but ultimately fell short of the 85% compliance mark, but still rounded up the percentage showing it was compliant.

In the other instances, they said the state acknowledged that its compliance scores on two requirements that health care specialty appointments be scheduled within a certain number of days were inaccurate -- because cancelled or delayed appointments were omitted from their calculations of compliance — and haven’t corrected the scores, lawyers for prisoners said.

The Arizona Department of Corrections, Rehabilitation and Reentry didn’t immediately respond to a request for comment on the latest filing made on behalf of prisoners.

In 2018, a magistrate judge imposed a $1.4 million contempt fine for noncompliance against the state that was reimbursed by Corizon, which at the time was the state’s prison health care contractor. The state said it’s seeking reimbursement from Corizon for the second fine.

Corrections officials have declined to say whether they would try to pass along the costs of a third fine to Centurion of Arizona, the state’s current contractor.

“It is entirely plausible that one reason that the past fines have not had an effect on defendants’ behavior is that they have been indemnified from having to actually pay the fines themselves,” the attorneys for prisoners said. “The court has the power to change this dynamic and incentive structure.”

In the nine years since the case was filed, the lawsuit has cost the state $20 million, including $10 million for attorneys defending prison officials and $8.1 million for lawyers who pressed the case on behalf of inmates, according to records.

Lawyers for the prisoners urged Silver not to accept the state’s excuses that its efforts in responding to the coronavirus prevented it from complying, saying the corrections department and its health care providers had staffing shortages before the pandemic.

The settlement arose out of a lawsuit that alleged the state’s prisons didn’t meet the basic requirements for providing adequate medical and mental health care for prisoners. The lawsuit said prisoners complained that their cancer went undetected or that they were told to pray to be cured after begging for treatment.