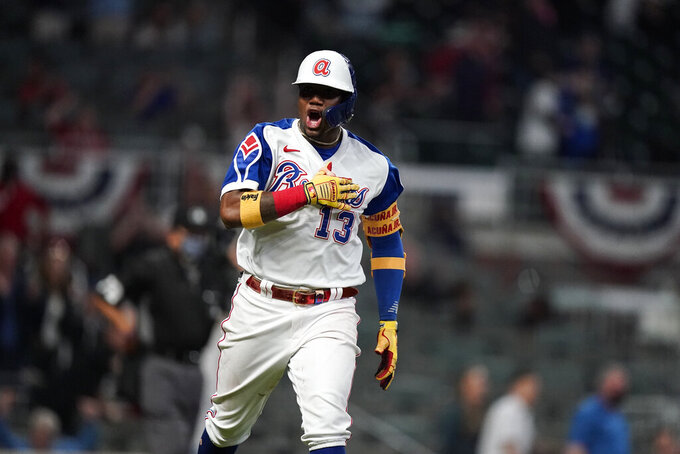 Atlanta Braves' Ronald Acuna Jr. celebrates his home run during the seventh inning of the team's baseball game against the Miami Marlins on Wednesday, April 14, 2021, in Atlanta. (AP Photo/Brynn Anderson)

A look at what's happening around the majors Tuesday:

Braves star Ronald Acuña Jr. is uncertain for the opener of a two-game series at Yankee Stadium after an MRI revealed a mild abdominal strain. Acuña was injured diving back into first base on a pickoff throw Sunday night in a 13-4 win over the Chicago Cubs. Atlanta was off Monday, giving the the 23-year-old a day to recover. The All-Star outfielder is off to a blistering start, hitting .419 with a major league-leading seven homers and 16 RBIs.

Atlanta rolls into the Bronx at a good time, with the Yankees mired in an AL-worst 5-10 start. New York’s .210 batting average is next-to-last in the AL, and a team with a dearth of left-handed hitters is batting just .202 against right-handed pitchers. The Yankees’ 55 runs entering Monday tied Detroit for the AL low.

The Minnesota Twins are set to resume their schedule after postponing three games due to the club's coronavirus issues. Games on Saturday and Sunday against the Los Angeles Angels were postponed, as was Monday's opener of a series in Oakland. The Twins are slated to play a doubleheader against the A's on Tuesday.

The Twins have had at least four positive coronavirus tests in the past week. Kyle Garlick, another unnamed Twins player and a team staff member tested positive in the two days before the postponements against the Angels, manager Rocco Baldelli said this weekend. Shortstop Andrelton Simmons already hadn’t made the trip to Anaheim after testing positive early in the week.

Reds outfielder Nick Castellanos will begin serving a two-game suspension for his role in an on-field brawl after he lost his appeal of MLB's ban Monday. Castellanos sparked a benches-clearing incident during the season's opening weekend when he yelled and stood over Cardinals pitcher Jake Woodford after sliding into home plate — Woodford had hit him with a pitch earlier in the inning.

The league's ruling was upheld by Major League Baseball special assistant John McHale Jr. Castellanos will serve the penalty during the first two games of a three-game series against Arizona that starts Tuesday.

White Sox left-hander Carlos Rodón faces the Indians in his first start since completing a no-hitter against Cleveland last Wednesday. Rodón came within two outs of a perfect game but hit a batter in the ninth inning of that 8-0 victory, the second no-hitter in the majors this season. Reds left-hander Johnny Vander Meer is the only big leaguer to throw consecutive no-hitters, which he did in 1938.

Miami Marlins center fielder Starling Marte will be out for at least a few games with a broken left rib. An MRI on Monday revealed a non-displaced fracture, meaning the rib maintained its proper alignment, the Marlins said. Marte will refrain from activity for five to seven days before being evaluated, and he’s expected to go on the injured list. Miami is set to open a home series against Baltimore.