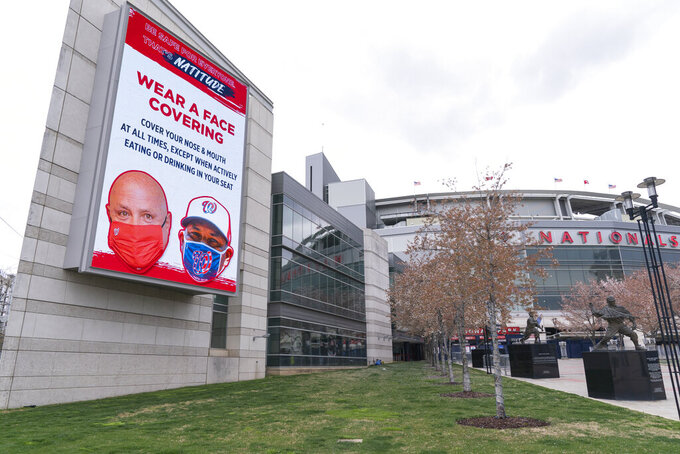 A look at what’s happening around the majors Monday:

The Nationals will begin their season Tuesday by hosting the Atlanta Braves after Major League Baseball postponed Monday’s opener of the teams’ three-game series because of a coronavirus outbreak that involves 11 of Washington’s players.

“The most recent round of test results of Nationals personnel included no new positives,” said an MLB statement sent Sunday night. “All of (Washington’s) eligible personnel will be able to participate in baseball activities at Nationals Park on Monday.”

Washington’s season-opening, three-game series against the Mets at Nationals Park was postponed because of coronavirus concerns, including four positive tests among Nats players.

General manager Mike Rizzo said none of those 11 — a majority of whom, although not all, were supposed to be on the opening day roster — would be available if the three-game set with Atlanta begins Monday afternoon.

The Texas Rangers are set to play their first regular-season game in front of fans at Globe Life Field. The $1.2 billion ballpark opened last year when crowds weren’t permitted during the virus-shortened season -- the stadium did allow fans when it held the first neutral-site World Series and also the NL Championship Series.

Globe Life Field is the only stadium in the majors that is open to 100% capacity for fans.

Cedric Mullins and the Orioles are 3-0 going into their series at Yankee Stadium. Mullins went 5 for 5 with three doubles as Baltimore finished up a sweep at Fenway Park.

“I think the synergy we have is really strong,” Mullins said. “Guys have been playing with each other for a few years now.”

In last year’s pandemic-shortened season, the Orioles finished fourth in the AL East with a 25-35 record, coming off 108 losses in 2019 and a club-record high 115 the previous year.

Twins center fielder Byron Buxton left Sunday’s game at Milwaukee in the third inning with an illness unrelated to COVID-19, according to team officials. Buxton homered in each of Minnesota’s first two games and doubled in his only plate appearance Sunday. ... Royals 3B Hunter Dozier hasn’t played for two straight games because his right hand is swollen. Manager Mike Matheny doesn’t expect him to miss much time.