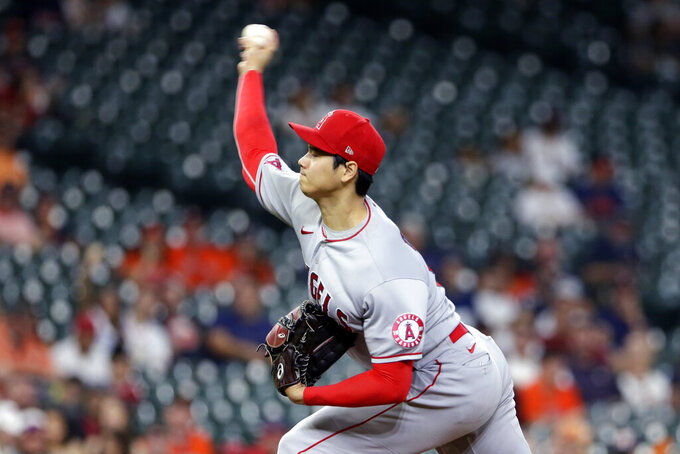 Shohei Ohtani (1-0, 2.10 ERA) makes his sixth pitching start of the season when the Angels face Aaron Civale (5-1, 3.40) and the Indians. Ohtani hit his major league-leading 14th home run during Tuesday night's 6-5 loss to Cleveland, connecting for the third straight day. The two-way star is the first pitcher since 1900 to rack up at least 40 strikeouts and allow 11 or fewer hits over his first five starts of a season.

Los Angeles will again be without three-time AL MVP Mike Trout, who was placed on the injured list Tuesday with a strained right calf. Trout could be sidelined past the All-Star break after getting hurt on the bases Monday night. He is expected to miss six to eight weeks.

“I felt a pop,” Trout said. "I knew it was bad when it happened. I’ve never felt anything like this before.”

The streaking San Diego Padres expect to have first baseman Eric Hosmer back and possibly shortstop Fernando Tatis Jr. as well when they host Colorado again.

Padres manager Jayce Tingler said Hosmer has been cleared to rejoin the team and Tatis will be evaluated Wednesday to see if he passes COVID-19 protocols. Tingler said earlier he hopes right fielder Wil Myers can be activated this weekend. They were among five players placed on the injured list last week.

Tatis and Myers tested positive, while Hosmer, Jurickson Profar and Jorge Mateo went on the IL for contact tracing. Profar and Mateo were activated Monday night.

The Padres are riding a five-game winning streak and have won eight of nine. San Diego has 26 wins, tied with San Francisco for most in the majors.

Mercedes got Minnesota’s attention when he homered on a 3-0 pitch from infielder Willians Astudillo in the ninth inning of Chicago’s 16-4 victory Monday night, sparking the latest debate about baseball's unwritten etiquette rules. White Sox manager Tony La Russa said Mercedes made a mistake, and the Hall of Fame skipper apologized to the Twins.

“There’s one thing acknowledging it, and that’s appreciated, but it doesn’t quell all of the emotions from all the guys in the clubhouse, in and of itself,” Baldelli said before Tuesday’s game.

Corey Kluber takes the mound at the Texas Rangers’ retractable roof stadium for the second time, this time starting against them for the New York Yankees.

The two-time AL Cy Young Award winner threw just one inning in his only season with the Rangers, tearing a muscle in his shoulder during a start last July in the third game played in the $1.2 billion stadium. The injury didn’t require surgery, but ended his season.

That scoreless inning cost the Rangers $18.5 million — his $17.5 million salary after they got him in a December 2019 trade from Cleveland, and the $1 million buyout of an $18.5 million club option for this season. Kluber then signed an $11 million free-agent deal with the Yankees, and is 3-2 with a 3.48 ERA in eight starts.

With four Cy Young Awards between them, Max Scherzer (3-2, 2.10 ERA) starts for the Washington Nationals at Wrigley Field against Jake Arrieta (4-3, 4.10) and the Chicago Cubs. First baseman Anthony Rizzo exited Tuesday night’s game for the Cubs because of tightness in his lower back.

Christian Yelich is back with the Milwaukee Brewers after the star outfielder was activated from the injured list Tuesday and played just his second major league game in five weeks. The 2018 NL MVP was the designated hitter when Milwaukee opened a two-game interleague series in Kansas City.

Yelich played nine games to start the season before leaving with stiffness in his lower back on April 11 in St. Louis. He tried to return May 3 in Philadelphia but played just one game before going back on the injured list.

Kevin Gausman (3-0, 1.84 ERA) pitches for the NL West-leading Giants in Cincinnati against left-hander Wade Miley (4-3, 3.69), who threw a no-hitter on May 7 but lasted only three innings in his most recent start Friday. San Francisco has won the first two of the four-game set.

Gleyber Torres could be back in the New York Yankees' lineup against Texas, a week after the fully vaccinated shortstop tested positive for COVID-19.

Yankees manager Aaron Boone said Tuesday that Torres had been cleared by Major League Baseball’s joint committee and was already en route to Texas to rejoin the team. He could potentially be activated Wednesday.

Asymptomatic vaccinated people can be cleared to return if they test negative twice.

Torres was the only player among nine total positives within the Yankees traveling party since last week, which included three coaches and five staffers. Boone said Torres is the only one in that group cleared to return.

New York second baseman Rougned Odor was activated from the injured list Tuesday and started against the Rangers, his former team. Odor missed 12 games with a left knee sprain.