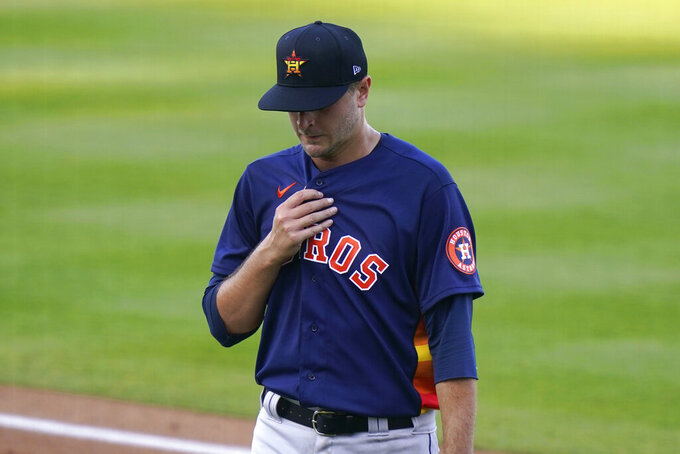 The Red Sox and Twins were scheduled to begin their series in Minnesota a day late.

Monday's opener of a four-game set at Target Field was postponed because of safety concerns following the fatal police shooting of a Black man in Minnesota and the potential for unrest in the area.

The NBA's Timberwolves and NHL's Wild also postponed their games a day after the shooting of 20-year-old Daunte Wright following a traffic stop in a nearby suburb of Minneapolis.

The Twins said their decision was made in consultation with Major League Baseball and state and local officials.

The Chicago Cubs are concerned about a possible COVID-19 outbreak after two coaches tested positive for the virus and three relievers were placed on the COVID-19-related injured list.

The team announced the positive test for bullpen coach Chris Young before its 6-3 loss at Milwaukee. First base coach Craig Driver already was away from the club following his positive test.

Relief pitchers Brandon Workman, Jason Adam and Dan Winkler were placed on the COVID-19 injured list Monday. There was no word on whether their designation was the result of a positive test or contact tracing.

“There’s always that underlying, ‘How big is this?’ There’s concern, for sure,” he said.

Ross said the organization is hoping for the best and planning for the worst.

“We didn’t deal with this last year and feel very fortunate in that way,” he said. “You’re worried about the health and well-being of others and I think it hits home every time my phone rings and it’s one of the docs or trainers. Your heart stings. And we’re trying to win ballgames, too.”

Cy Young Award winner Shane Bieber pitches for Cleveland against White Sox right-hander Lucas Giolito in a matchup of aces as the division rivals continue their four-game series in Chicago. Bieber is 2-2 with a 2.94 ERA in eight starts against the White Sox, while Giolito is 2-2 with a 2.62 ERA in seven outings versus the Indians.

SNAKES GET A BOOST

Arizona right-hander Zac Gallen returns to the mound against Oakland after missing the first 12 days of the season with a hairline fracture in his right forearm. The 25-year-old Gallen was the Diamondbacks’ best pitcher last year, going 3-2 with a 2.75 ERA in 12 starts. He had 82 strikeouts in 72 innings. Gallen was hurt during spring training while taking batting practice, saying he got jammed by an inside pitch.

Kyle Schwarber, Josh Bell and Josh Harrison were finally in Washington's starting lineup Monday night after sitting out the first six games due to a coronavirus outbreak that sidelined nine players and postponed four games. Schwarber doubled home a run in his delayed Nationals debut and Washington (2-5) snapped a five-game skid with a 5-2 victory at St. Louis.

“We talked about it before the game: Fresh start for all of us, our guys are back,” manager Dave Martinez said. “So let’s forget about the first six games.”

Five players returned from the COVID-19 injured list last weekend; the only one still missing is left-hander Jon Lester, who will ramp up at the team's alternate training site before joining the Nationals. Martinez said most of his players were vaccinated at their St. Louis hotel.

Wet weather took a game away from Marcus Stroman and gave it right back.

Stroman (1-0) will start for the New York Mets against Philadelphia in the finale of a single-admission doubleheader scheduled to make up Monday night's rainout at Citi Field.

Stroman's outing Sunday versus Miami was suspended after nine pitches because of rain and the game was scheduled to resume as part of a doubleheader on Aug. 31. The right-hander tweeted his unhappiness during the delay to have wasted his turn in the rotation.

Mets manager Luis Rojas initially said Monday that Stroman would remain on four days of rest and pitch Friday at Colorado. After the postponement was announced, Rojas reversed course and said Stroman would start the nightcap Tuesday.

Rojas said Stroman had initially wanted to recreate his entire between-start regimen, including a bullpen and workouts, but after playing catch Monday, the pitcher told his manager his arm would be ready Tuesday.

Taijuan Walker starts the opener for the Mets against Chase Anderson, with Aaron Nola going in the nightcap for Philadelphia opposite Stroman. Continuing pandemic special rules, each game will be scheduled for seven innings.

New York has played just five games in the first 12 days of the season due to the COVID-19 outbreak among the Nationals and then bad weather.

Jake Odorizzi is set to make his Astros debut at home against the Detroit Tigers, led by former Houston manager A.J. Hinch.

Odorizzi was a free agent and signed a $23.5 million, three-year contract with the Astros on March 8. He had a 15.75 ERA in two spring training appearances, and Houston optioned him to its alternate training site when the season began. Matthew Boyd (1-1) starts for the Tigers.

Angels third baseman Anthony Rendon is on the 10-day injured list because of a strained groin. Rendon was hurt making a throw late in a 15-1 loss to Toronto on Saturday. Los Angeles manager Joe Maddon said Monday he hopes Rendon will be sidelined for the minimum 10 days.

The 30-year-old Rendon is starting his second season with the Angels after signing a $245 million, seven-year contract. He hit his first home run of the season Saturday and is batting .290 with three RBIs.

Jose Rojas started at the hot corner Monday night and went 0 for 5 in a 10-3 win at Kansas City.

After pitching six scoreless innings in a 2-0 loss to Atlanta that was part of a doubleheader sweep, Washington right-hander Stephen Strasburg (0-0) faces St. Louis ace Jack Flaherty (1-0), coming off a win against Miami in which he allowed one hit over six shutout innings.